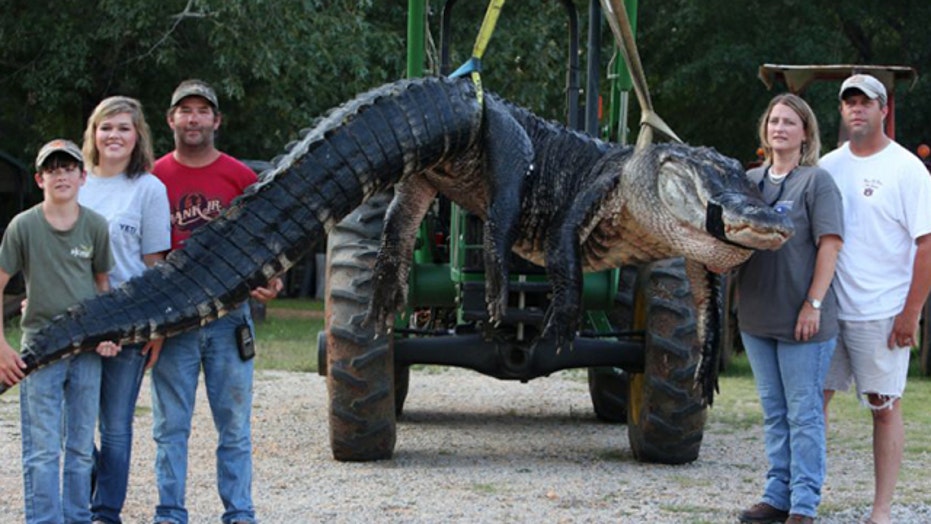 Catch of a lifetime: Monster gator caught in Alabama

CAMDEN, Ala. – A family battled a 1,000-pound alligator for more than five hours, putting several large hooks into the beast before firing a fatal shotgun blast into the gator's head.

The result? The catch of a lifetime and a state record in Alabama.

The 15-foot gator was hooked in a creek about 80 miles west of Montgomery early Saturday, Al.com reported. The first attempt to weigh the gator destroyed a winch state biologists typically use, so they had a backhoe lift it. It weighed 1,011.5 pounds.

It was caught by Mandy and John Stokes, brother-in-law Kevin Jenkins and his children, 16-year-old Savannah and 14-year-old Parker.

"We give all the glory to God. Ten men couldn't have done what we did," John Stokes said.

The gator didn't go down without a fight. After the family got some large hooks into the gator, Mandy Stokes aimed her 20-gauge shotgun at the "sweet spot" behind the alligator's eyes. That's where she was told to aim during a mandatory training class for Alabama gator hunters.

She pulled the trigger, but the gator's head was too far beneath the water's surface.

"All it did was make this gator mad," Mandy Stokes told Al.com. "Fear had taken hold at this point."

The gator surged forward and towed the 17-foot boat and its five passengers across the creek at a startling speed, the hunters said. The towing continued until the boat crashed into a tree stump in the creek, sending the crew spilling on top of each other.

Eventually, Mandy Stokes got another shot.

"When I pulled the trigger this time, water just exploded on all of us," she said.

This time, she killed the alligator. Anyone within a hundred miles probably heard the mixed screams of relief, joy and exhilaration, John Stokes said.

They tied the gator to one side of the boat and hugged the opposite side so it wouldn't tip over as they made an hour-long trek back to their truck.

The family planned to send the gator to a taxidermy shop. Beyond that, they're not sure what they're going to do with it.