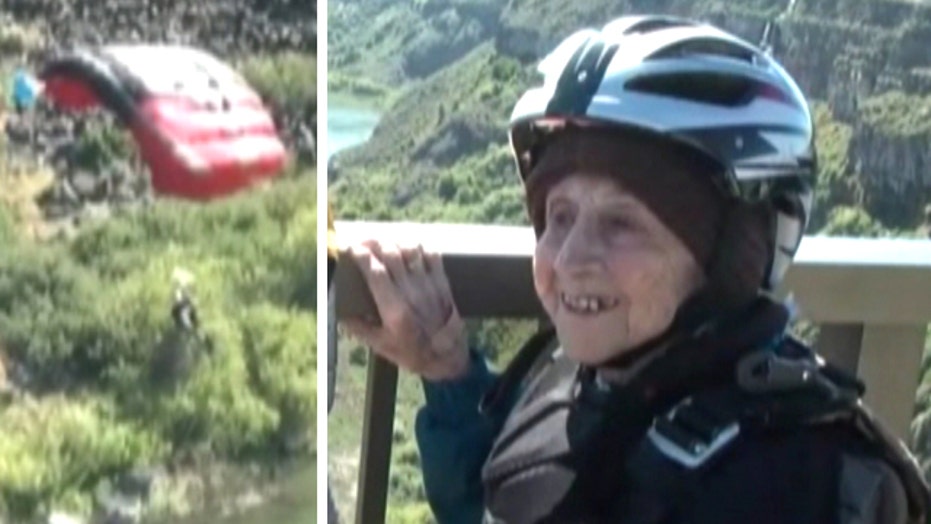 A 102-year-old Idaho woman celebrated her birthday in quite unconventional fashion — by BASE jumping off the state’s Perrine Bridge.

Dorothy Custer, who celebrated her 101st birthday by zip-lining in Idaho’s Snake River Canyon, marked her May 30 birthday by leaping off the 586-foot-high span in a tandem jump with professional BASE jumper Sean Chuman. Custer originally wanted a “calm” celebration, but her relatives suggested otherwise.

“I was thinking of going to jump out of a plane, but then I found out it was too much,” Custer told KMTV.com. “So then I said, ‘Forget it, I'll just have a very calm birthday.’”

When asked about the key to her longevity, Custer said, "Well, I've often wondered that too, but I've never thought of age.” She added, “I just went on living and having a good time and doing what was necessary. I don't think of age right now.”

Custer said she isn’t even sure why she made the eye-popping plunge off the four-lane bridge, which is the only manmade structure in the United States where BASE jumping is allowed year-round without a permit.

Chuman, meanwhile, said there’s no doubt that Custer is his oldest client.

“I'm really excited for her really because I've never met a lady her age that wants to jump off. So if she wants to jump off, I'm excited to do it,” he said. “It's going to be really cool.”