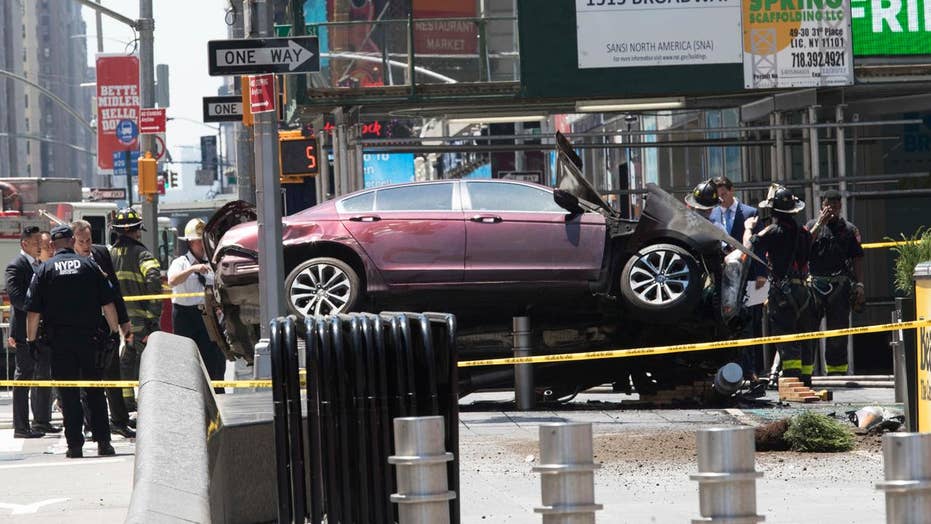 Witness: Car was driving against the flow of traffic

One woman was killed and 22 other pedestrians were struck when a speeding car plowed into a crowd in New York's Times Square on Thursday afternoon.

The suspected driver, Richard Rojas, was taken into custody in the incident, New York City Mayor Bill de Blasio said during a news conference. The 26-year-old Bronx man had two prior arrests for driving while intoxicated, in 2008 and 2015, and he was being tested for alcohol consumption on Thursday. Rojas is a U.S. citizen who previously served in the Navy, authorities said.

A car plowed into a crowd in Times Square on Thursday. (Perry Chiaramonte/Fox News)

There's no indication the crash was related to terrorism, de Blasio said; however, the White House and FBI were made aware of the incident.

Of those who were hit, an 18-year-old woman was killed and her 13-year-old sister injured. Four of the 22 injuries were considered critical, officials said, though all were expected to survive. Three other people were in serious condition.

Witnesses described a chaotic scene as the car careened the wrong way down three blocks, mowing down pedestrians.

"He was driving very fast," said Karma Namgyal, 49, a street vendor. "He was going the wrong way up the street and drove onto the sidewalk. He started hitting people. They were flying in the air. He plowed through them. The people he hit were face down. Everyone else started screaming. It was all fast. "

Several witnesses told Fox News after the driver crashed, he attempted to escape; however, he was ultimately pinned to the ground by five people who held him at the scene until police arrived.

"It sounded like a bomb going off," said Dave Willis, a tourist from the U.K. "I ran over and it was over in seconds. He was tackled to the ground."

A maroon 2009 Honda could be seen in multiple photos upended on steel barriers and a lamppost at the corner of 45th Street and Broadway. The FDNY received the first emergency call just before noon.

The NYPD expected the police activity in the area to cause delays.

"Due to a vehicle collision with pedestrian injuries, emergency vehicles are in the area of #TimesSquare," the NYPD tweeted. "Expect delays in the area."