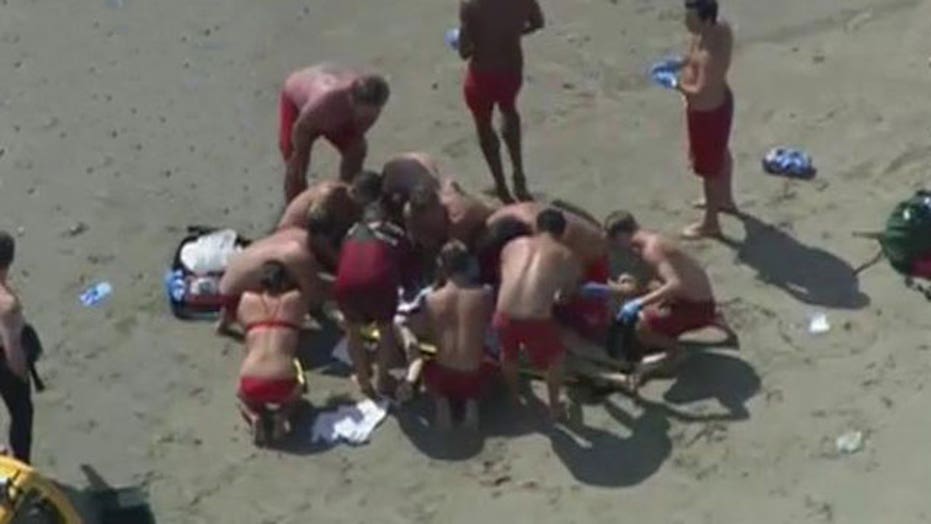 1 dead, over a dozen injured

One person was killed and 13 others were injured after lightning from a rare summer thunderstorm struck two Los Angeles-area locations Sunday afternoon.

Lt. Larry Dietz of the Los Angeles County Coroner's Office told The Associated Press that a 20-year-old man was struck by lightning on Venice Beach and pronounced dead at a local hospital Sunday evening. A second man struck by lightning on the beach was listed as being in critical condition, while eight others, including a 15-year-old, remained hospitalized.

In all, 13 people were struck by lightning at Venice Beach, while a 57-year-old man was hit while golfing on Catalina Island. The man was hospitalized in stable condition.

City fire spokesman Katherine Main said four people were treated at Venice Beach after the lightning struck at approximately 2:30 p.m. local time. Other fire officials said most of those taken to hospitals were mainly shaken up and were expected to recover. Some appear to have been in the water and others on the sand and the beach's famed boardwalk.

Steve Christensen said his friend had been body-surfing and was sitting on the beach when lifeguards began searching for a missing swimmer.

"He (Christensen's friend) went out to the water to find him and walked right into him," Christensen said. "He was face down on the bottom."

Christensen said his friend pulled the man, who appeared to be in his 20s, from the water, and lifeguards began CPR before taking him away on a truck. Dietz said he could not confirm whether the man was the same victim who was later pronounced dead.

Stuart Acher said he was struck while playing volleyball on the beach.

"We went about our game and then all of a sudden, there was a big flash of light and a boom, and it felt like someone punched me in the back of my head," he told KABC-TV. "It went down my whole side of my right body, and my calves sort of locked up, and I fell over. And I looked up and everybody else was, you know, falling over."

Paramedics examined Acher but he felt all right and went back to playing volleyball.

"The majority of the folks that were on the (volleyball) court all felt a little tingly," said another player, Jerome Williams. "Everyone hit the court. It sounded like a sonic boom."

The unusual weather came from monsoon moisture that brought a line of brief but fierce afternoon thunderstorms to the region.

Hundreds of lightning strikes were reported, but the storms were vanishing by later Sunday afternoon as they moved northwest.

There was a lingering slight chance of storms in the mountains and the Antelope Valley desert area into Monday, according to the National Weather Service.