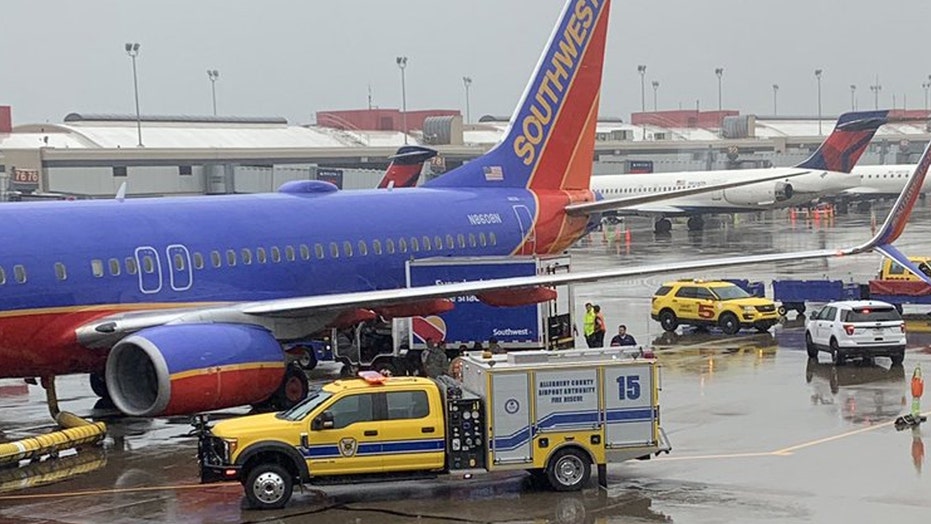 Confusion erupted at Pittsburgh International Airport when an airline truck hit a plane that was parked at one of the airport’s gates.

The plane was reportedly full of passengers waiting to depart when the incident occurred. Based on images that were posted online, the truck appears to have hit the plane behind the wing. It’s unclear how much damage either vehicle suffered.

Teresa Varley posted pictures of the aftermath on Twitter. She claims that she was on the plane, which was flying to Denver when the accident happened.  “Sitting on our plane and this truck hit us just as we were getting ready to pull out. Shocking and scary. Praying the person is okay,” she captioned the photos.

The vehicle was a provisioning truck, which is used to resupply planes with materials for flights like food and drink, The Washington Post reports. It has not been revealed what caused the accident, although the driver was taken to the hospital for treatment. No injuries were reported from passengers on the plane.

“A Southwest Airlines provisioning truck made contact with an aircraft parked at gate A1 at Pittsburgh International Airport on Monday morning," a spokesperson for Southwest Airlines told Fox News. "Our immediate concern is for the well-being of our Ramp Agent who was driving the vehicle.  The aircraft at the gate was a Boeing 737 -800 that was scheduled to operate Flight #157 to Denver with 174 Customers onboard and a Crew of six.  At this early stage, we do not have any reports of injuries to those onboard the aircraft.  The aircraft will be taken out of service, and we are working to accommodate our Customers to their destinations as quickly as possible.”

Meanwhile, Pittsburgh International Airport tweeted a statement about the incident, posting, “Shortly before 10:30 a.m. airport fire rescue responded to Gate A1 to a report of an airline vehicle making contact with a parked @SouthwestAir plane. The driver of the vehicle was transported to a local hospital. No other injuries reported. Airport operations are unaffected.”