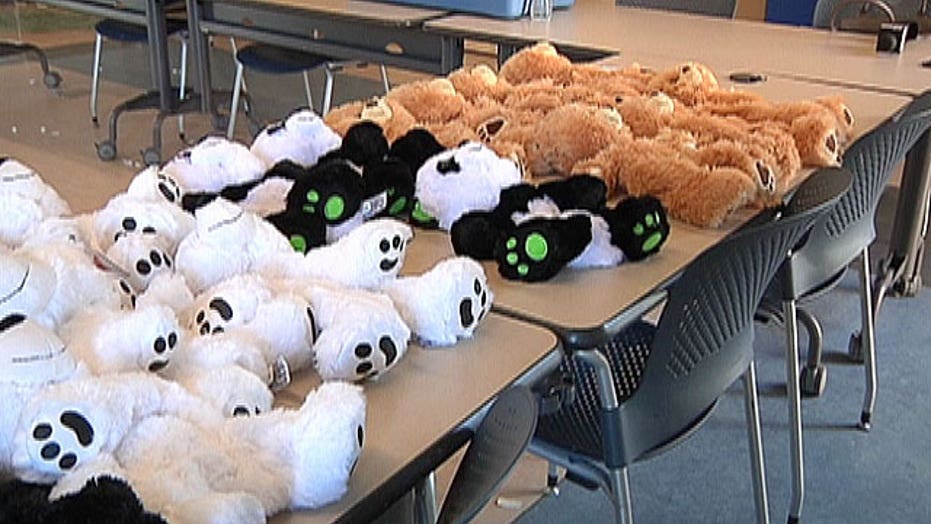 The Tucson Community Cares Foundation established "Adopt-a-Bairman" to help little ones feel connected to their parents while they're deployed overseas in remote locations like Afghanistan.

The “Adopt-a-Bairman” program provides children of deploying Airmen with teddy bears that have voice chips holding recordings of their parent's voice. The program is meant to help the kids better understand and cope with their absence.

Staff Sergeant Ramon Hill has been in the Air Force for ten years. He brought his two-year-old-son Chase to make a bairman that he hopes will help make the time apart easier when he is deployed overseas in a few months.

"When he was first born, I was deployed to Italy. We tried Skype, but hopefully this will cheer him up during those times I'm gone," Hill told FoxNews.com.

At the special events, where families are invited to stuff the teddy bears and record a special message, families and volunteers alike said they were touched.

"It's just so fun seeing the kids come through here, and the connection they have with their parents," said Brian Beebe of Tucson Community Cares.

Brandi Leal stuffed two bears with her husband: one for her son, Jason and another for her unborn daughter.

Sometimes communicating with her husband is simply impossible. Leal said the bears really help when they just need to hear his voice.

"When you can't Skype or get an email, it definitely helps the kids. And honestly it helps you too," Leal told FoxNews.com.

All foundation events are completely funded by donations, and staffed by volunteers. Each "Adopt-a-Bairman" event costs about $2,500 to put on. Beebe called it a small price to pay to help those who have given so much.

"Those parents are sacrificing being with those kids to protect us. So while you're gone watching our backs, we'll take care of your families," Beebe said.