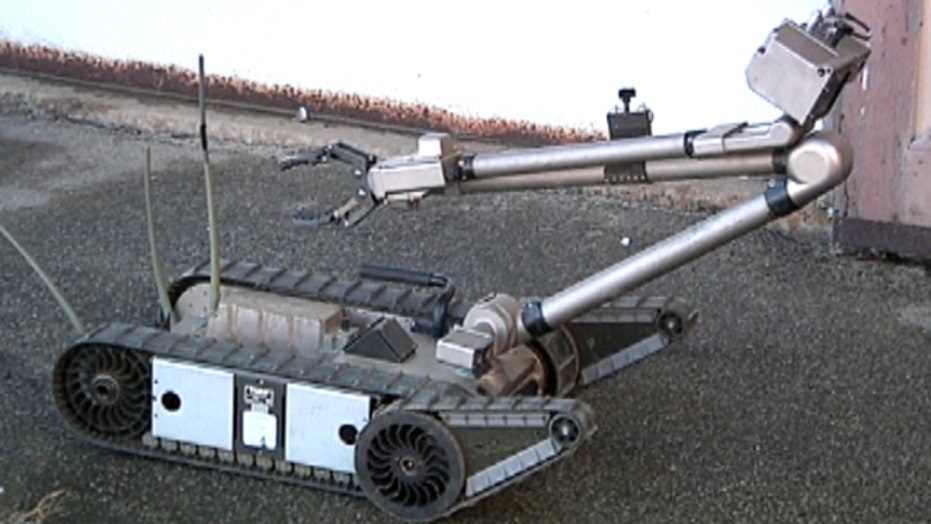 A look at the latest in military tech

iRobot is pioneering the latest in military technology. With four different special ops bots serving in the US military, iRobot has deployed over 5,000 robotic fleets to the US military, state and local law enforcement, and industries worldwide.

Mark Balenger, director of iRobot’s Department of Defense robotics says, “Our customers share a common thread in that they all have a dangerous job. Whether they are military, first responders, or work in a nuclear facility they all have jobs that require them to do dangerous work.”

These bots are full of brains and brawn, and have the resume to match. The most widely used robot, the “PacBot” served one of its first operational deployments at ground zero after 9-11.

“We’ve also had two of our robots operating in Fukushima in Japan after the earthquake…Whether its used to actually interrogate a person, or investigate a potential bomb- the Pacbot can go up and down stairs, it can open doors…Its again, all that core basic mission of providing a safe distance between a robot operator and a threat..”

One of the latest inventions is the new compact I-10 First Look robot. The bot is small enough to fit in a soldier’s pack and is ready to serve at a moments notice.

“Its very rugged. It can be thrown up to 15 feet and has the ability to self-right, flip itself back over, and go on its mission. So it’s meant to be thrown. Whether they need to look inside a building they can throw it inside a window…or over a compound wall if they were in a place like Afghanistan where they need to get a better understanding of what’s going on.”

The First Look can be customized with a variety of cool gadgets, from thermal imagery cameras that help soldiers navigate in the dark to manipulator arms that can open doors and packages.

“To have that ability to manipulate down range in such a small robot is not something that hasn’t really existed before.”, says Balenger.

New Hampshire State Police Bomb Squad has been using robots to facilitate their operations since the early 80s. Jeff Dade says the latest fleet of robotics has become a “game changer”.

Balenger remarks on the growing demand for robotics, “Over the last couple of years we have started to see a transition of that authority to local law enforcement, to state police where they want to use that same technology that the military has had for 10-15 years.”

Dade says the robots have been useful in multiple capacities for the police, whether it’s testing hazardous materials or assisting the state’s tactical teams.

“While these robots are assigned to the bomb squad we use them for other purposes as well. So in addition to bomb disposal and reconnaissance and things of that nature, we also support tactical teams…being able to go in and perform reconnaissance in buildings for barricaded subject or something like that. It allows us to look for a bad guy or some kind of hazard without putting anybody at risk.”

iRobot uses their testing site to put their bots through types of obstacles they will encounter in the field. Whether the challenges include running stairs, lifting weights, or doing chin ups, iRobot tests the limits of every robot to ensure they are ready for deployment.