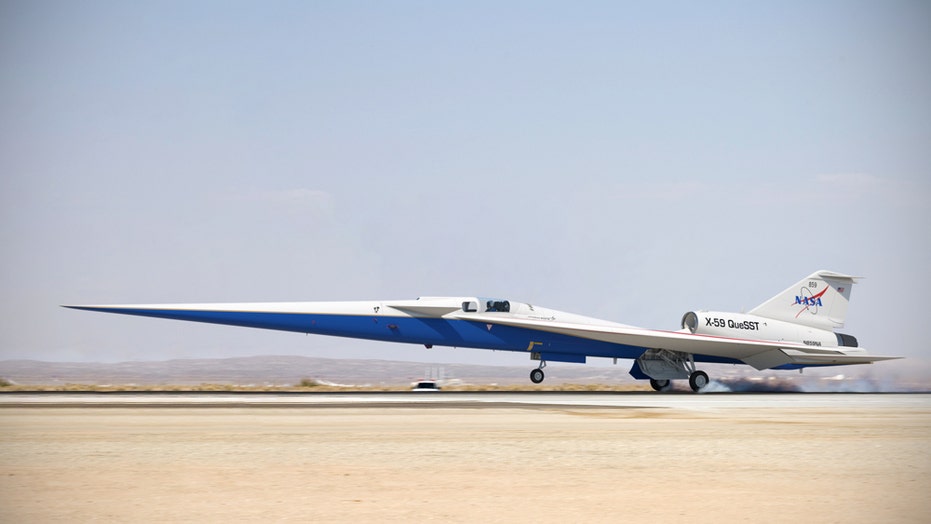 Our return to supersonic travel is getting closer.

NASA announced that the final assembly of its supersonic X-plane, the X-59 Quiet SuperSonic Technology (QueSST), has been approved. The decision, known as Key Decision Point-D (KDP-D), was the last hurdle before the QueSST aircraft is cleared to make its first flight in 2021.

“With the completion of KDP-D we’ve shown the project is on schedule, it’s well planned and on track. We have everything in place to continue this historic research mission for the nation’s air-traveling public,” said Bob Pearce, NASA’s associate administrator for Aeronautics, in a statement.

Illustration of the completed X-59 QueSST landing on a runway. (Credit: Lockheed Martin)

The plane, designed and put together by Lockheed Martin, has a long, pointed nose and is built so that the sonic boom sound is reduced to a "gentle thump" or possibly no sound at all, NASA added. The new plane's sound when passing by will register around 75 Perceived Level decibel, much lower than a Sonic boom, which comes in at 90.

The government agency said that "it will be flown above select U.S. communities to generate data from sensors and people on the ground in order to gauge public perception," as well as help establish new rules for commercial supersonic air travel. Supersonic passenger flights have been banned over land since the early 1970s because of the boom.

Lockheed said on its website that the X-59 will fly at a height of 55,000 feet at a speed of about 940 mph and "create a sound about as loud as a car door closing."

In April 2018, NASA first announced that it was teaming up with Lockheed to develop the plane. Likened to the supersonic Concorde, which was decommissioned in 2003, the X-59 could make it possible to fly from New York City to London in just under three hours.

The Concorde, which reached a top speed of over 1,350 mph, was eventually retired following the deadly crash of Air France Flight 4590, the downturn in commercial aviation following the Sept. 11 terror attacks, and the end of maintenance support for the aircraft.

NASA has been testing X-planes, experimental aircraft that it uses to test a variety of different technologies, for more than 70 years, including the Bell X-1, the first plane to break the sound barrier in flight. In October, it announced it was testing the first all-electric experimental aircraft, the X-57 Maxwell.