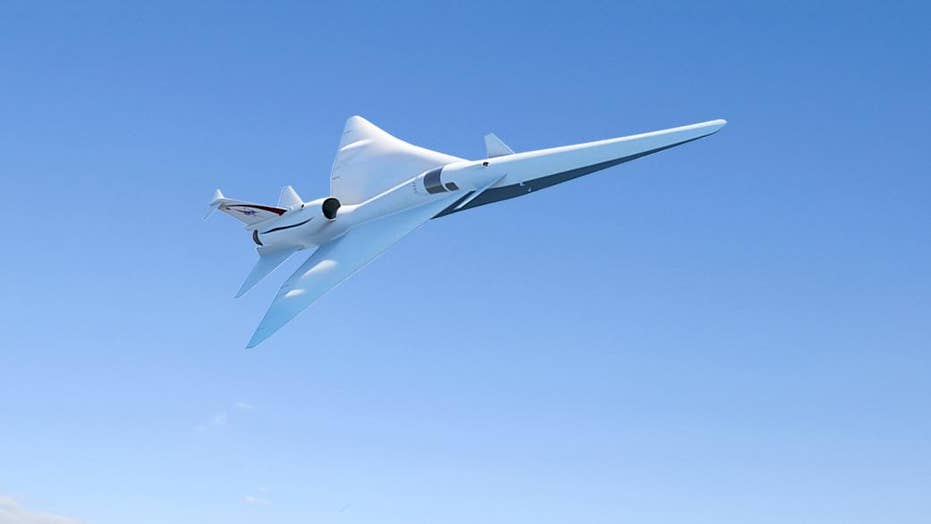 NASA as awarded Lockheed Martin Aeronautics Company the Low-Boom Flight Demonstration Contract. Their task is to design an aircraft that will cruise at 55,000 feet at 940 mph that would not illicit a sonic boom.

NASA and Lockheed Martin are developing a new, experimental supersonic aircraft that could make it possible to fly from New York City to London in just under three hours.

The plane, dubbed the Low Boom Flight Demonstrator, has spurred hopes that supersonic travel will once again be available to commercial passengers. But there will be one major difference between the experimental plane under development and the current batch of supersonic aircraft in the skies today.

Instead of the ear-splitting sonic boom that occurs when planes break the sound barrier, developers say the Low Boom Flight Demonstrator – also known as the X-plane – will make a sound only about as loud as a car door closing by utilizing a specific wing shape.

"Future supersonic aircraft seeking to achieve a low-boom ... will rely on a swept wing design in order to fly at supersonic speeds without producing a loud sonic boom," according to NASA's website, which adds that the wing shape will prevent shockwaves from coming together to produce two sonic booms.

Plans for the new plane were announced earlier this week when officials from NASA awarded Lockheed Martin a $247.5 million contract to build the aircraft.

While the first test is projected to take place in 2021, researchers want to make clear that the X-plane won’t be used for commercial purposes.

"This is a purpose-built experimental research aircraft," Dave Richardson, the director for air vehicle designs and technologies at Lockheed Martin Skunk Works, said during a press conference in Washington D.C., according to the Houston Chronicle. "It is not a prototype for a supersonic business jet. It is not a prototype for some weapons system. It is not a derivative or some other modification of an existing airplane."

Instead the plane will be used to test technologies and collect data that could be used to change Federal Aviation Administration rules about supersonic flights. The FAA currently bans supersonic flights over land in large part because of the impact sonic booms would have on communities.

A Concorde jet owned by British Airways is seen as it lands at Washington Dulles International airport, October 14, 2003, as part of its farewell North American tour. The plane is to be retired from commercial service before the end of the year. REUTERS/Yuri Gripas YG/GN (Reuters)

Concerns over the sonic boom first arose with the introduction of the Concorde – the infamous British-French passenger turbojet that could hit a maximum speed over twice the speed of sound. Due to its noise when breaking the sound barrier, the plane was eventually limited solely to ocean-going crossing from London and Paris to New York, Washington D.C. and Barbados.

The Concorde was eventually retired following the deadly crash of Air France Flight 4590, the downturn in commercial aviation following the September 11 terror attacks, and the end of maintenance support for the aircraft.

The X-plane will cruise at altitude of 55,000 feet at a speed of 940 mile per hour – or just over 400 mph slower than the Concorde. The new plane’s sound when passing by will register around 75 Perceived Level decibel, much lower than a Sonic boom, which comes in at 90.

Despite researchers curbing expectations about the X-plane becoming a commercial aircraft, they did say that research could eventually lead to widespread use of supersonic planes to transport paying customers on flights that last half as long as they do today.

"I believe today is a new beginning for NASA Aeronautics," Jaiwon Shin, associate administrator of NASA’s Aeronautics Research Mission Directorate, said at the news conference. "People flying on commercial supersonic flights in the future will say April 3, 2018, was the day it all began."

Lockheed Martin, in fact, already has competition if it hopes to build a new supersonic passenger plane as the Denver-based Boom Technology us developing a commercial aircraft that could cut down the time it takes to fly from San Francisco to Tokyo down to just six hours from 11 hours– by traveling at a speed of 1,450 mph. Both pan Airlines and Virgin Group have invested in the company, with Boom hoping to have these planes carrying passengers across the Pacific by 2023.