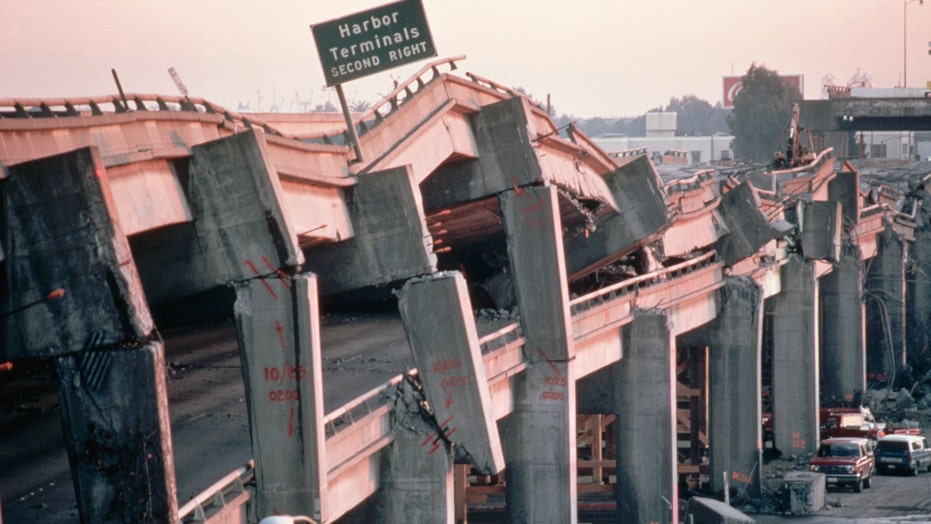 "The system uses ground motion sensors from across the state to detect earthquakes before humans can feel them and will notify Californians so that they can ‘Drop, cover and hold on’ in advance of an earthquake," said the California Governor's Office of Emergency Services (Cal OES) in a statement.

The system uses a new version of the MyShake app developed by the University of California, Berkeley, according to the LA Times.

MASSIVE CALIFORNIA EARTHQUAKES COULD BE SEEN FROM SPACE

The remains of the Cypress Freeway, which ran through the center of Oakland, following the San Francisco earthquake of 1989. (Jim Sugar/Corbis via Getty Images)

"Today, we are making a big leap forward in terms of focusing attention on prevention - we're announcing the nation's first comprehensive early alert system for earthquakes," said Newsom, during the launch event. "We're announcing the ability for millions and millions of Californians to download an app, MyShake ... if millions of people do that, we will have points of contact, the ability to crowdsource information, the likes of which no country in the world has advanced."

"I say that knowingly, that Japan and Mexico have systems already in place in this space, but because of the extraordinary complementary work that has been done by UC Berkeley, by Caltech, by USGS, and by our own Office of Emergency Service, we feel that we're on the leading and cutting edge in terms of the ability to utilize that technology," he added.

Thursday also marks the 30th anniversary of the deadly Loma Prieta earthquake, which ravaged the San Francisco Bay area on Oct. 17, 1989. The 7.1 magnitude 'quake killed 63 people and at the time, caused $6 billion in damage.

The new system integrates the existing ShakeAlert earthquake early warning system, which sends alerts before 'quakes hit. Warnings produced by the ShakeAlert system will be pushed through two delivery systems: the MyShake cellphone app and the same wireless notification system that issues Amber Alerts, meaning people may receive both notifications.

CALIFORNIA MEGA-EARTHQUAKE FEAR: IS THE SAN ANDREAS FAULT AT RISK OF THE 'BIG ONE'?

"This app is at a place now where we're satisfied with the performance and the testing, which has been very well done, (so) that we think we're at a place where it's not perfect but we can keep people safe, and that's our ultimate threshold," said Brian Ferguson, deputy director for crisis communication and public affairs at the Office of Emergency Services, earlier this week.

The state earthquake app is available for download to iOS users through the App Store and through Google Play stores for Android phones.

“The alerts will only go to people that are going to feel shaking," said Richard Allen, director of the UC Berkeley Seismological Laboratory, earlier this week.

The MyShake system maintains a database of which cellphones are in 10-kilometer-by-10-kilometer (6.2-mile-by-6.2-mile) cell grids and pushes the alerts to phones in zones where at least level 3 shaking will occur, so receiving an alert is not based on which tower the phone is communicating with, Allen said.

WEA creates polygons that include cellphone towers, said Ryan Arba, chief of the seismic hazards branch of the Office of Emergency Services.