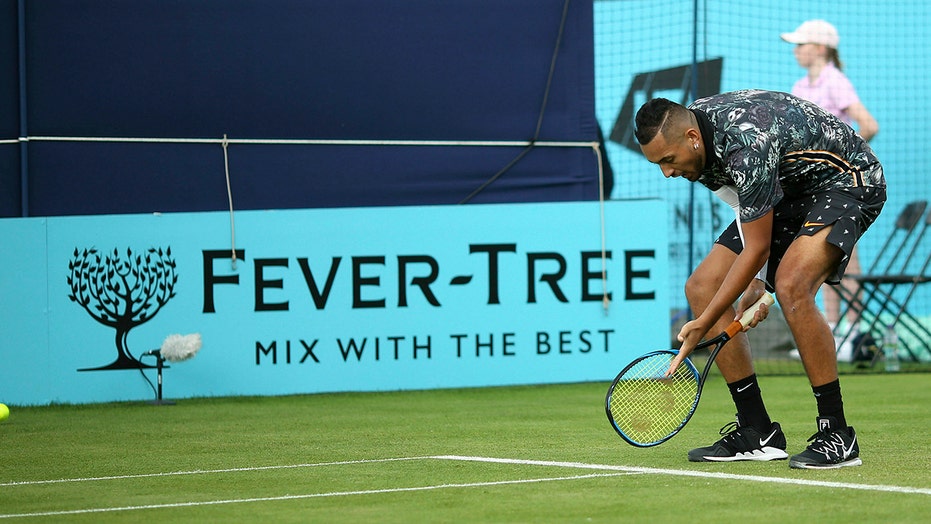 Nick Kyrgios was at it again Thursday during a match at Queen’s Club in London.

Kyrgios, who has a history of emotional outbursts, accused tennis officials of “rigging” his first-round match against Robert Carballes Baena. He also went on an expletive-laden tirade at umpire Fergus Murphy after claiming his opponent had double-faulted.

Kyrgios started his rant after Murphy issued him a code violation, saying “it's a joke, man. It's a serious joke.” He then added: “Like, your hat looks ridiculous, also. It's not even sunny.”

Later during the match, the Australian said: The ball was this far out on the second serve. I'm going. I'm not going to give 100 percent when I've got linesmen rigging the game, I don't want to play.

“You wonder why I don't try half the time. Literally, the set had finished, he double-faulted. Why am I playing at 5-5? Absolute joke.”

TOP-RANKED OSAKA LOSES IN 2ND ROUND IN BIRMINGHAM

Kyrgios then lashed out at himself for apparently staying up all night playing video games.

“So lazy, do something, so lazy you are," he said to himself. "You were playing FIFA until 3 a.m., what do you expect?”

Australia's Nick Kyrgios appeals to the umpire on court one during his tennis match against Spain's Roberto Carballes Baena day four of the Fever-Tree Championship at the Queen's Club, London. (Steven Paston/PA via AP)

Kyrgios still won the first-round match, but later bowed out to Felix Auger-Aliassime.

Kyrgios was disqualified from the Italian Open last month for kicking a bottle and throwing a chair. His outburst started after he was docked a game for his conduct.

He had previously received an eight-week ban for allegedly not giving his best effort during a 2016 match at the Shanghai Masters. In addition, he has been on the receiving end of harsh criticism from tennis great John McEnroe, who said in 2016 he should retire.