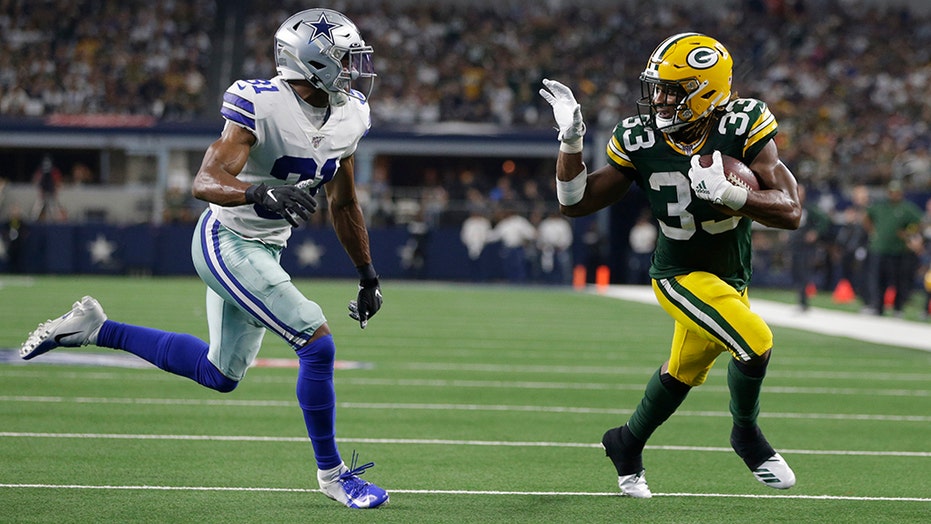 Green Bay Packers running back Aaron Jones waved a cheeky “bye-bye” to the Dallas Cowboys’ defense Sunday as he went on to score a franchise record-tying touchdown but NFL officials weren’t as amused with the playful taunt that went with it.

Jones confirmed Friday that he was fined $10,527 by the league for “taunting/ unsportsmanlike conduct” after he gestured at cornerback Byron Jones as he finessed his way past him and into the end zone to score his fourth touchdown of the game in the third quarter, ESPN reported.

Jones said while it wasn’t worth the fine, he’s pleased with the photo op.

"I can't say it was worth it, but the picture is a dope picture," he said. "I can't argue with that. I'm going to have that blown up one day in my house. I definitely got a nice picture out of it, but it hurts my pocket a little bit. I want that money."

The 24-year-old Texas native was drafted by the Packers in the fifth round of the 2017 draft.

He had a career-high 182 scrimmage yards — 107 rushing and 75 receiving — and opened the scoring with an 18-yard run after being held to 19 and 21 yards rushing the previous two weeks.

Jones plans to appeal the ruling, claiming he wasn’t waving at anyone in particular.