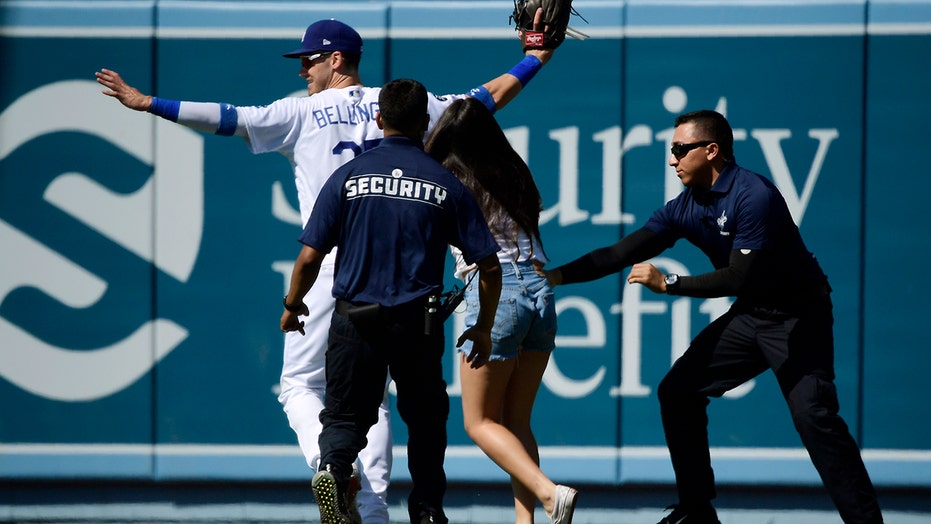 Los Angeles Dodgers star Cody Bellinger has been on the receiving end of some unwanted hugs recently from adoring fans who have rushed the field to greet the outfielder.

While Bellinger said he thinks the recent trend could get “dangerous,” two girls who have gotten past security said rushing the former National League Rookie of the Year was “worth it.”

Bellinger was rushed by a young fan during his game against the Colorado Rockies in Los Angeles on Sunday. The fan was handcuffed by security but called the moment “the best day ever” and that it was “worth it," according to NBC Los Angeles.

Monday night, Bellinger and the Dodgers were playing the Arizona Diamondbacks in Phoenix when another teen went after the outfielder. She posted the video of her getting onto the field on Twitter.

Bellinger is one of the top Dodgers players. He’s hit 25 home runs and is batting a league-leading .353 with a .450 on-base percentage and a 1.152 OPS. He also leads the National League in hits with 97.

He told The Athletic after Monday’s game he thinks the trend could get out of hand.

A fan is grabbed by security as she approaches Los Angeles Dodgers right fielder Cody Bellinger during the ninth inning of a baseball game against the Colorado Rockies, Sunday, June 23, 2019, in Los Angeles. (AP Photo/Mark J. Terrill)

“I’m just trying to play a game. I don’t think I should have to worry about who’s gonna come on the field and whatnot,” he said. “I think it could be dangerous, although it’s innocent right now.”

“It’s getting ridiculous,” he told the Los Angeles Times. “It’s just not safe and it seems like they’re getting younger and younger and it’s going around now that nothing’s happening to these young kids. They just kind of get a slap on the wrist. So baseball’s going to have to do something to make it hurt enough to keep fans in the stands and not running out on the field.”

Major League Baseball was reportedly in touch with the Dodgers and Diamondbacks about enhanced security after the latest incident.