Quinn said he chose his new team before an offseason trade from Miami because it felt like the right fit when he visited the Cowboys.

The player has raised his fist during the anthem while he was with the Los Angeles Rams and then the Dolphins.

In this 2017 photo, then-Los Angeles Rams linebacker Robert Quinn (94) raising his fist during the anthem before a game against the Dallas Cowboys, in Arlington, Texas. (AP Photo/Ron Jenkins, File)

Owner Jerry Jones has taken a hard stance against such displays by the Cowboys, saying a year ago at training camp: “Our policy is that you stand at the anthem, toe on the line.”

Quinn said he hasn’t addressed the topic yet with Jones.

“It might come up,” Quinn told The Associated Press on Sunday when asked if he planned to discuss it with Jones. “Right now, it’s not on my mind. I’m here to play football right now. Focus on my new journey.”

Asked if he and Jones had to get on the same page on the issue before the season, Quinn told the AP, “You’ll have to talk to Jerry about that one.” Jones wasn’t immediately available for comment Monday.

In this 2018 photo, then-Miami Dolphins defensive end Robert Quinn (94) raising his right fist during the anthem before a game against the Tampa Bay Buccaneers, in Miami Gardens, Fla. (AP Photo/Wilfredo Lee, File)

The Cowboys are set to open the regular season at home against the New York Giants on Sept. 8. Their preseason opener is Aug. 10 in San Francisco.

Since Colin Kaepernick sparked the debate in 2016 by kneeling during “The Star-Spangled Banner,” some players have been kneeling, sitting or raising fists during the anthem to protest police brutality, social injustice and racial inequality.

Quinn said he grew frustrated with the reporting on the issue during his time with the Dolphins because he thought the message getting out was too much about “war and prison.”

“As sorry as it is, the type of world we live in, we’ve just got to, again, like I said, peace love and happiness within yourself. Just try to make the best out of every day. It’s frustrating. But only so much you can control. I got my family I need to take care of and some other folks. It sucks the way this world is. You can’t fight a war by yourself.”

Last year, the NFL quickly scrapped a proposed compromise that would have allowed players to stay in the locker room during the anthem while subjecting them to potential punishment for any displays during the anthem. 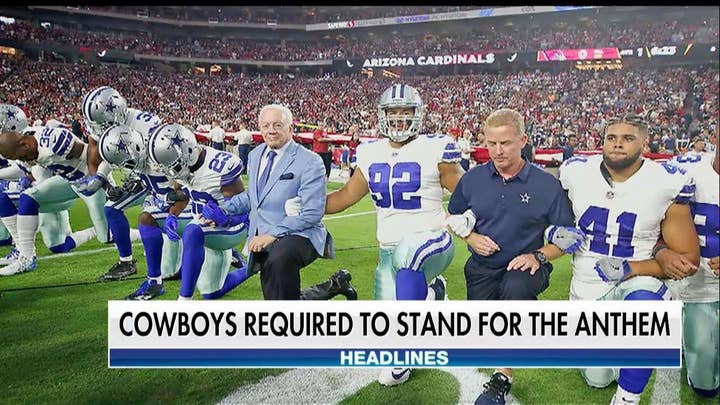 Jones said he wouldn’t support players staying in the locker room, then offered his “toe on the line” declaration.

A year earlier, the outspoken billionaire was the first owner to suggest a player would be benched for protesting during the anthem.

The closest any Dallas player has come to protesting during the anthem came in 2017 when defensive linemen David Irving and Damontre Moore raised their fists briefly as the song ended. They weren’t disciplined.

Neither player is still with the Cowboys, but their departures weren’t related to issues over the anthem.

When the anthem issue flared again early in the 2017 season following strong criticism of the players by President Trump, the Cowboys decided on a show of unity before a game in Arizona. Before the anthem was played, Jones knelt with the players in a long line of locked arms. They stood before the anthem started. 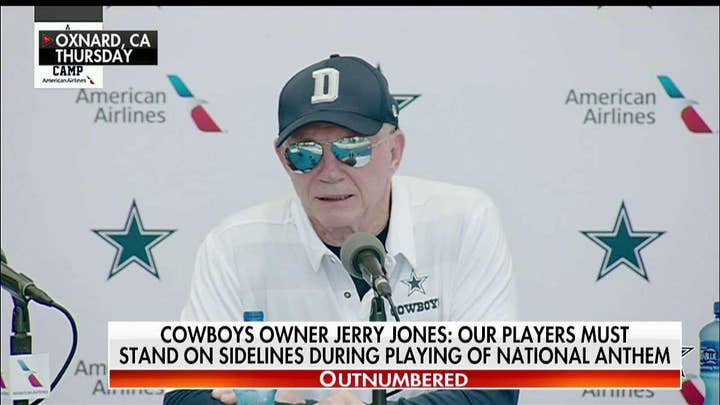 Jones has said he understood the point of view of players who've said they weren’t protesting the flag or the military. Still, that didn’t change his strong views about the flag.

“The priority is about the flag, and be real clear about that,” he said last year.