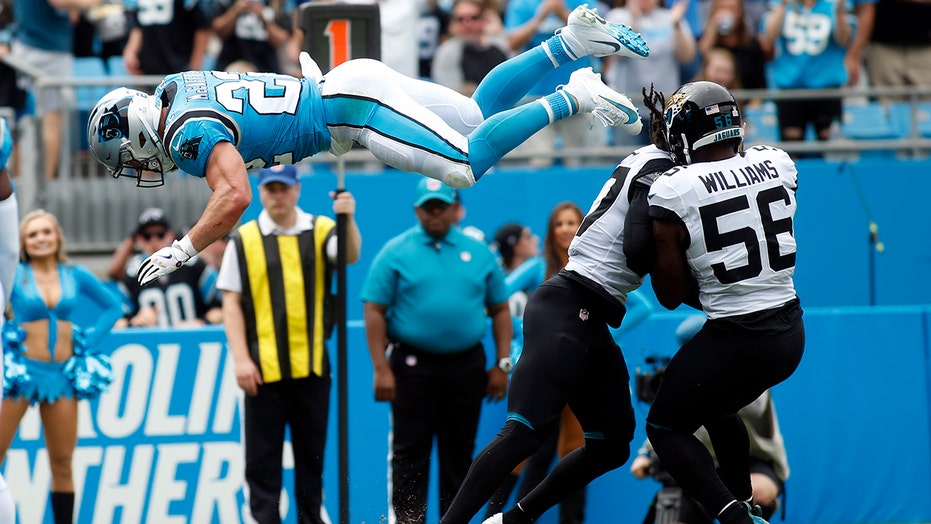 Carolina Panthers running back Christian McCaffrey put on a show against the Jacksonville Jaguars on Sunday and it started with an electrifying touchdown in the first quarter.

McCaffrey received the handoff from quarterback Kyle Allen and ran to his right. He then leaped over a Jaguars defender from about the 2-yard line and somersaulted into the end zone for the score.

McCaffrey’s touchdown put the Panthers up early in what turned out to be a close game against the Jaguars. The running back finished the game with three total touchdowns, two rushing and one receiving. He had 176 rushing yards on 19 carries and 61 receiving yards on six catches.

Carolina also received a big touchdown from its defense.

The team forced Jaguars quarterback Gardner Minshew to fumble three times and recovered each one.

On one fumble caused by defensive end Mario Addison in the second quarter, rookie Brian Burns picked the ball up and returned it for a touchdown.

In the fourth quarter, Panthers running back Reggie Bonnafon scored the go-ahead touchdown to put the Panthers up and eventually give them the win.

Carolina defeated Jacksonville 34-27. The Panthers improved to 3-2 on the season while the Jaguars fell to 2-3.