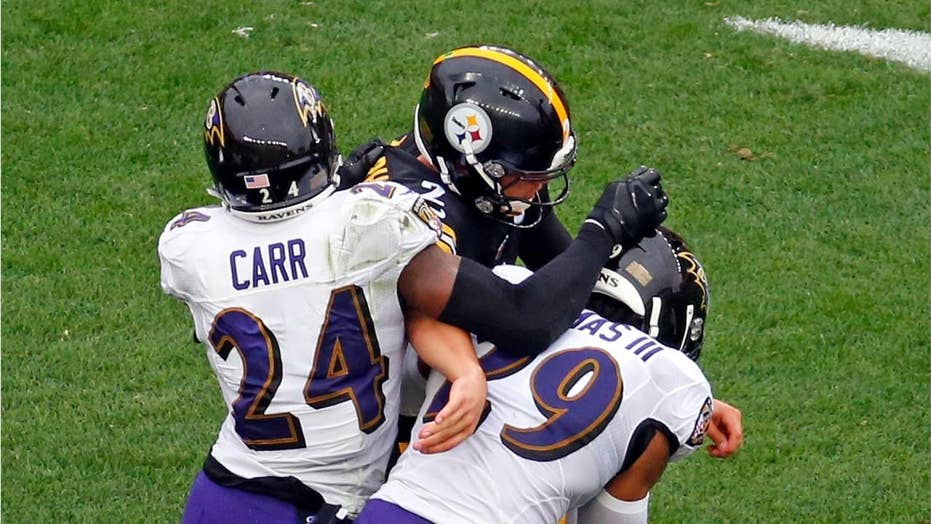 Pittsburgh Steelers' Mason Rudolph briefly hospitalized after receiving a scary blow to head from Baltimore Ravens safety Earl Thomas during the game. Rudolph is the second quarterback the Steelers have lost due to injury this season.

Pittsburgh Steelers quarterback Mason Rudolph was briefly hospitalized after being knocked unconscious by a vicious blow to the head during a game Sunday against the Baltimore Ravens.

Rudolph, who took over as the Steelers' signal-caller when Ben Roethlisberger suffered a season-ending injury in week three against Seattle, took the blow from Ravens safety Earl Thomas in the latter half of the third quarter. The hit knocked Rudolph out cold and left some of his Steelers teammates emotional as he lay motionless on the field.

“When he was on the ground, it looked like it was a lot more serious than just a simple hit,” Steelers offensive lineman Alejandro Villanueva said after the game, according to ESPN. “I don't like to get into details of his medical condition. You could tell he had been hit to the head and the only thing I could do was to wave the trainers down to the location.”

“I'm worried about him,” Thomas said, according to ESPN. “I heard he's at the hospital. My prayers go out to him and his family. I've never tried to hurt anybody. At the end of the day, guys have families.”

Thomas didn't receive a penalty on the play.

Medical personnel took Rudolph’s facemask off and had to walk him off the field because the medical cart appeared to break down.

Pittsburgh Steelers running back James Conner (30) holds onto wide receiver JuJu Smith-Schuster (19) who reacts after quarterback Mason Rudolph (2) was injured in the second half of an NFL football game against the Baltimore Ravens, Sunday, Oct. 6, 2019, in Pittsburgh. (AP Photo/Don Wright)

Rudolph was taken to the hospital as a precautionary measure. According to multiple reports Monday, he was home and resting.

Devlin Hodges, a rookie from Samford University, finished the game. He was 7-for-9 with 68 yards passing.