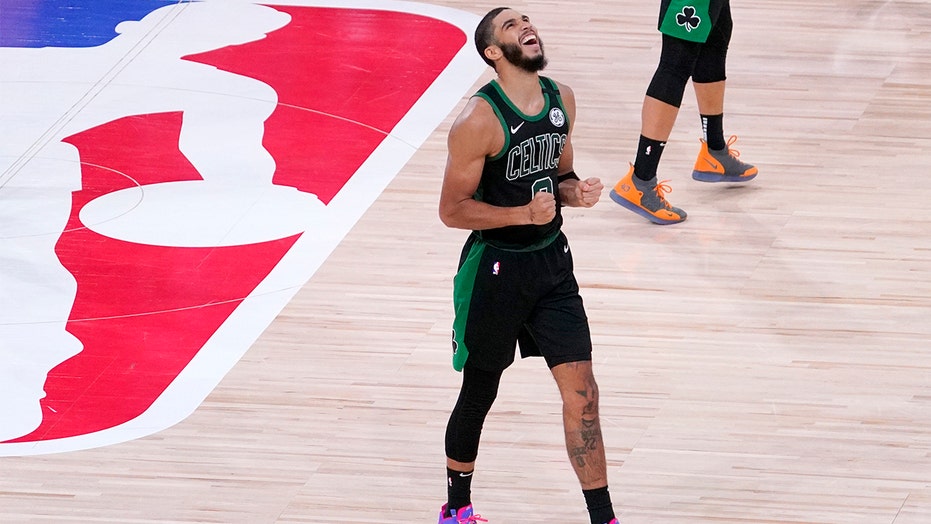 Getting big leads has been relatively easy for the Boston Celtics in these Eastern Conference finals.

This time, they also found a way to finish the job.

And just like that, the East title series got a whole lot closer.

Jaylen Brown scored 26 points, Jayson Tatum added 25 and the Celtics got right back into the East finals with a 117-106 victory over the Miami Heat in Game 3 on Saturday night. Kemba Walker added 21 to help Boston pull to 2-1 in the best-of-seven series.

“There's some great guys in that locker room," Brown said. “A lot of emotion, a lot of passion, but we're a family and we're here for each other at the end of the day. We exemplified that when we came out together ... we kept our will high and we persevered to win this game."

Marcus Smart scored 20 points for Boston, going 9 for 9 from the foul line in the fourth quarter. The Celtics — who also got 14 rebounds and eight assists from Tatum — outscored Miami 60-36 inside the paint, led by as many as 20 and never trailed.

The Celtics, who were angry in their postgame locker room after Game 2, were obviously far happier Saturday after holding Miami to 39% shooting.

“We have great competitive spirit and we showed it tonight," Walker said.

Bam Adebayo had 27 points and 16 rebounds for the Heat, who fell for just the second time in 12 games in these playoffs. Tyler Herro scored 22 points, Jimmy Butler had 17 and Duncan Robinson 13.

“We’re not the type of team where we can go through the motions and try and figure out everything in the first half, and then in the third or fourth we just try to turn it on," Adebayo said. “It’s not like that. We are not that type of team. We've got to play with detail."

They got within eight on a 3-pointer by Robinson with 1:12 left, setting the tone for the Celtics to scramble at the end. Brown committed a flagrant foul nine seconds later, and Robinson made one of two free throws to cut Boston's lead to 109-102.

Adebayo scored on the ensuing possession to get Miami within five and cap a 24-9 run, but the Heat got no closer.

“This is the conference finals, playing against a really good team," Heat coach Erik Spoelstra said. “You cannot lack in the areas of toughness, physicality, detail, force. They won all of those battles plus the easy transition ones."

Herro had 16 points in the second quarter alone to keep Miami close, the last of those 16 coming on a 3-pointer with 3:22 left before halftime to cut Boston’s lead to 51-48.

That’s when the Celtics started to run away.

Boston got three consecutive fast-break scores in a span of 48 seconds to push its lead back to 10, and after a late 3-pointer by Walker it was 63-50 at the break.

And when Miami tried another comeback in the third, Boston again had a late-in-the-quarter answer.

“We did some good things tonight to answer their runs, most of the time,” Stevens said.

Goran Dragic had 11 for Miami and Jae Crowder finished with 10. The Heat were 12 for 44 from 3-point range.

“We didn’t play hard enough," Butler said. “I think we didn’t do anything that we said that we were going to do."

Celtics: This is the 124th series in Boston playoff history, and the Celtics have trailed 3-0 in only seven of them. ... Brown and Tatum now have eight games each of at least 20 points so far in these playoffs. ... Gordon Hayward made his return after missing a month with a sprained right ankle, scoring six points in 31 minutes.

Heat: Even with the loss, Miami matched the best 12-game start to any postseason in team history — now 10-2. The Heat also started postseasons that way in 2005, 2012 and 2013. ... Miami never led, marking the first time that happened in the team’s last 70 games. The only other instance of that this season for the Heat was Nov. 23 against Philadelphia.

Games in the bubble still count toward “home” and “road” records. The road-designated team has won the last 12 games in which Boston has played — and in the playoffs, road teams are now 39-31. That ties the NBA record for road wins in any postseason; teams were 39-50 on the road in the 2014 playoffs. The road winning percentage this postseason (.557 right now) would also be an NBA record; the current mark is .519, set in 1966 when road teams went 14-13.

Partly to allow the Western Conference finals between the Los Angeles Lakers and Denver Nuggets to catch up, the Heat and Celtics won’t play Game 4 until Wednesday. Game 2 of Lakers-Nuggets is Sunday, followed by Game 3 on Tuesday. From there, both series will have an every-other-day format.