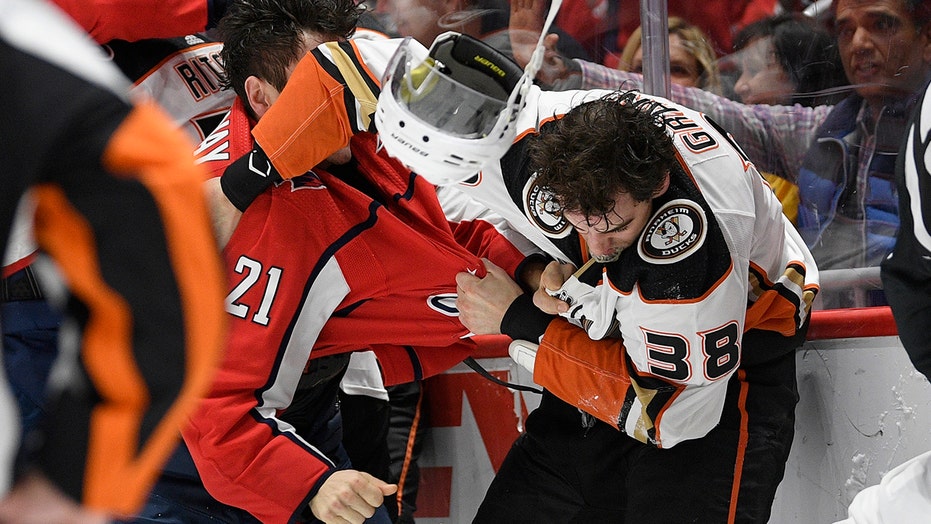 Washington Capitals winger Garnet Hathaway was ejected from Monday’s game against the Anaheim Ducks for spitting during a brawl with Erik Gudbranson.

The incident occurred toward the end of the second period, when Washington’s Brendan Leipsic incited the brawl by colliding with Anaheim’s Derek Grant. Nearly all of the skaters on the ice were involved in the fight, which included Hathaway fighting the Ducks’ Gudbranson, Grant and Nick Ritchie.

As Hathaway and Gudbranson tussled with referees in the middle trying to split them both apart, Hathaway appeared to spit in Gudbranson’s face. Officials double-checked the video before confirming a five-minute match penalty and game misconduct for Hathaway.

“Unfortunately, spit came out of my mouth after I got sucker punched and it went onto him,” Hathaway said after the game. “It has no place. It was an emotional play by me. You don’t plan any of that stuff in your head, and it was a quick reaction and unfortunately the wrong one for me to a sucker punch.”

Gudbranson received a 10-minute misconduct penalty and Ritchie was ejected for being the third man into a fight. Gudbranson expressed his anger with Hathaway after the game.