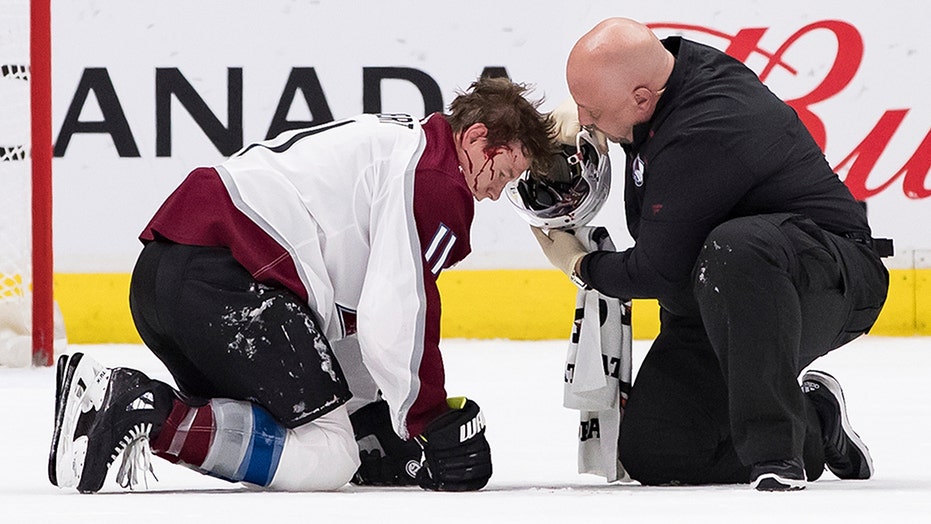 The Colorado Avalanche expressed their frustration with NHL officiating Saturday after referees declined to stop the game against the Vancouver Canucks while Matt Calvert was down on the ice in pain from taking a puck to the head.

Calvert was bleeding from the ear after being hit on the side of the head by an Elias Patterson wrist shot. The Canucks had possession of the puck and the officials let the play continue. Alex Elder eventually scored on the possession to cut the Avalanche lead down to one goal.

A trainer removes the helmet of Colorado Avalanche's Matt Calvert after Calvert was struck by the puck while blocking a Vancouver Canucks shot during the third period of an NHL hockey game Saturday, Nov. 16, 2019, in Vancouver, British Columbia. (Darryl Dyck/The Canadian Press via AP)

Colorado coach Jared Bednar was not happy with the decision.

“For me, we’re talking about head injuries and what not, and that’s the second time now in two weeks for us that a guy takes a puck in the face and is bleeding all over the ice and [officials are] letting it go,” Bednar said. “He’s not moving so I just think we should blow it dead. Sometimes it’s a tough call to make because you’re trying to let the play go and seeing if he’s going to get up. But I think eventually you should just blow it dead.”

“It’s a f---ing joke, man,” he told The Athletic. “Like, you want to protect a guy? The guy's got a family at home. He's laying there bleeding out of his head and they don't blow the f---ing whistle? It's a complete joke. It's an absolute joke, and they should be ashamed of themselves.”

“I can only imagine if that was LeBron James, his head was bleeding and they let the other team take a three-pointer to tie the game,” McKinnon said, according to Sportsnet. “I know it’s not the ref’s fault, it’s the league rule, but I think you need to look and who’s laying on the ice.”

“In the case where it is obvious that a player has sustained a serious injury, the Referee and/or Linesman may stop the play immediately.”

Canucks coach Travis Green said his team had a similar incident recently when defenseman Chris Tanev was injured blocking a shot against the Winnipeg Jets.

“My understanding is, if you have the puck with possession, you don’t blow the whistle,” Green said. “Right or wrong, that’s the way the rule has been for a while. We got fortunate tonight. You don’t like to see someone laying down hurt like that.”