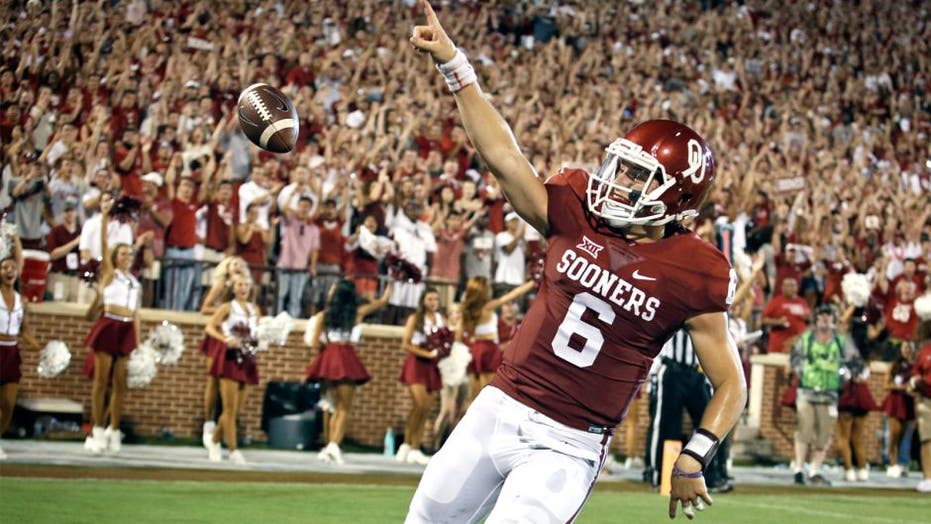 Just because Cleveland Browns star Baker Mayfield is more than a year removed from taking snaps as Oklahoma Sooners quarterback, it doesn’t mean he still can’t add to the school’s rivalry with Texas.

Mayfield had an interview on Sportstalk 1400 in Norman, Okla., and described the hype around the Texas Longhorns’ upcoming season as “crap” and proceeded to rip quarterback Sam Ehlinger.

NFL TEAMS UP WITH NCAA FOR NEXT ROUND OF SAFETY IMPROVEMENTS

“He couldn't beat Lake Travis, so I don't really care (about) his opinion on winning,” Mayfield told the radio station. “Westlake is a great program, but the two best quarterbacks to come out of there are Drew Brees and Nick Foles. Sam can stay down there in Texas.”

Mayfield won the Heisman Trophy while at Oklahoma. He was then drafted by the Cleveland Browns. (Mark D. Smith-USA TODAY Sports)

The former Heisman Trophy-winning quarterback added: “That will stir the pot. He doesn't like me, and I hope he knows I don't like him, either.”

To Mayfield, Texas wasn’t even close to being back in the national championship conversation.

“They said the same thing when they beat Notre Dame a couple of years ago, and they won like three games after that,” he said. “I'm sick of that crap.”

The Longhorns got the better of the Sooners in their first meeting last year, defeating them 48-45. But Oklahoma got the last laugh in the Big 12 Championship game, winning 39-27 and earning a birth into the College Football Playoff.