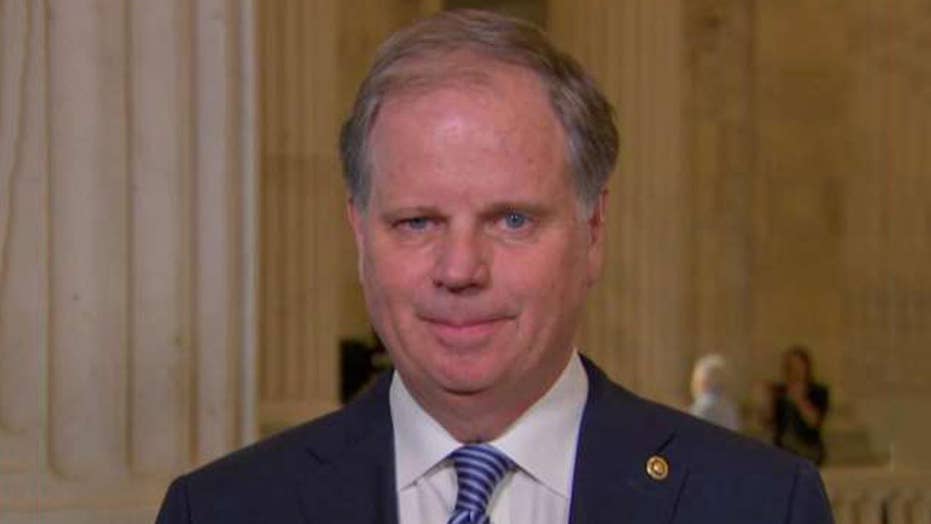 Jones: I'd like to see border patrol experts come to Capitol Hill and talk to us about their plans

Sen. Doug Jones weighs in on the current state of the partial government shutdown and funding for the border wall.

An Alabama congressman on Wednesday became the first prominent Republican to enter the race to challenge Democratic Sen. Doug Jones, one of the most vulnerable incumbents up for re-election in 2020.

U.S. Rep. Bradley Byrne announced his intention to run for the seat that was once held by former U.S. Attorney General Jeff Sessions, vowing to be a senator “who will fight with President Trump.”

“We have nominate the right conservative to run this race,” Byrne said in a phone interview with Fox News on Wednesday night after his announcement with supporters in Mobile. “Somebody who can appeal to the broadest of our Republican coalition in Alabama, who can run a strong race against incumbent Democrat Doug Jones, who now has a record."

ISIS WIFE FROM ALABAMA WILL NOT BE ADMITTED TO THE US, POMPEO SAYS

In 2017, Jones pulled off a major upset in Alabama by defeating the embattled Republican Roy Moore in a special election to fill Sessions’ vacant seat. Moore, the former chief justice of Alabama’s Supreme Court, faced multiple allegations during the campaign that he pursued romantic relationships with teenage girls while he was in his thirties -- accusations Moore repeatedly denied.

But the accusations propelled Jones to victory, making him the first Democrat to win election to the Senate from the deeply conservative state in 25 years.

U.S. Rep. Bradley Byrne announced his intention to run for the seat once held by former U.S. Attorney General Jeff Sessions during a campaign event in Mobile, vowing to be a senator “who will fight with President Trump. (Byrne campaign).

“I think 2017 was just a totally unique situation,” Byrne said. “It was very strange from the beginning to the end. I just don’t see that happening again. President Trump will be at the top of the ticket. I can’t see people voting for President Trump and then going over and voting for a Democratic senator.”

Jones is a top target for Republicans in a state Trump won 62 percent of the vote in Alabama in 2016.

Asked to assess Trump’s first term, Byrne cited the president’s record on judges, tax reform, the economy and border security and said, “I’ve been very pleased. I think he’s been a great president. I’ve been pleased to be one of the strongest supporters he’s got in Congress.”

Byrne, a former state legislator and chancellor of Alabama's two-year college system, was first elected to Congress in 2013. He made an unsuccessful bid for Alabama’s governorship in 2010.

Jones campaign responded to Byrne's entrance into the race by calling him a “career politician.”

"While some are focused only on the politics, and the politics of division in particular, Senator Jones is focused on finding common ground and getting things done for the people of Alabama," the campaign said in a statement.

The GOP primary could attract a large field, with others, like Senate President Pro Tem Del Marsh, considering getting into the race.

Sessions, who was forced out of the Justice Department last year after infuriating the president over his recusal from the Russia investigation, hasn’t ruled out running for his old seat. But the former attorney general has not made any noticeable moves indicating he is preparing for a run.