A woman who joined ISIS years ago is now begging for officials to let her back into the U.S. Kurdish forces captured Hoda Muthana, 24, and she is now at a refugee camp.

Secretary of State Mike Pompeo said Wednesday that an Alabama woman who joined ISIS but now wants to return home with the 18-month-old son she had with her ISIS husband will not be admitted back into the United States, saying she is not a U.S. citizen.

"I have instructed Secretary of State Mike Pompeo, and he fully agrees, not to allow Hoda Muthana back into the Country!" the president tweeted.

Muthana, 24, has pleaded with officials to let her back into the U.S. following her recent escape from ISIS and capture by Kurdish forces. She was born in 1994 in Hackensack, New Jersey.

It’s unclear the exact provision the State Department is using to deem Muthana not a citizen.

But it could be because Muthana’s father was a diplomat, something her legal representative, Hassan Shibly, acknowledged Wednesday.

According to the United States Citizenship and Immigration Services, children born in the United States to accredited foreign diplomatic officers do not acquire citizenship under the 14th Amendment since they are not born subject to the jurisdiction of the U.S. at the time.

However, Shibly says Muthana’s father stopped being a diplomat months before Hoda was born in New Jersey.

“The Trump administration continues its attempts to wrongfully strip citizens of their citizenship,” Shibly said. “Hoda Muthana had a valid US passport and is a citizen.”

Muthana is currently being held in a refugee camp in northeast Syria. She told The Guardian in an interview that her last four years with the terrorist group have been a traumatizing experience where “we starved and we literally ate grass."

“I would tell them please forgive me for being so ignorant, and I was really young and ignorant and I was 19 when I decided to leave,” she told the newspaper when asked if she had a message for American officials. 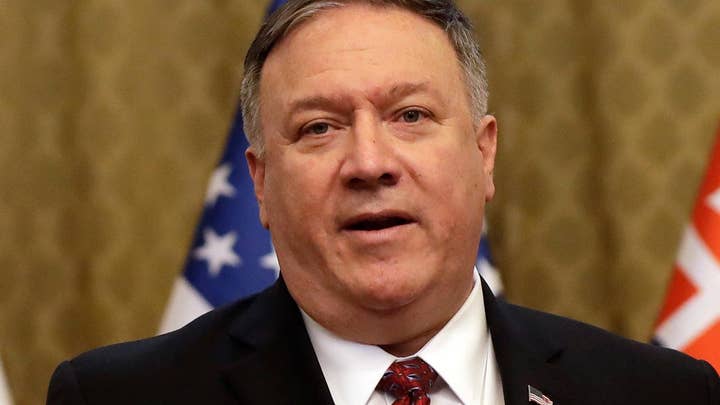 Muthana first made headlines in 2015 after it emerged that she left her family in Birmingham, Alabama to join the bloodthirsty terrorist group.

An attorney representing her parents at the time said Muthana was “brainwashed” over the Internet, according to the Associated Press, and that she went against her family’s wishes and the teachings of Islam by secretly boarding a plane to Turkey in late 2014 to link up with ISIS.

The attorney said it then, but it wasn’t until Sunday -- in her interview with The Guardian -- that Muthana admitted herself that she was “brainwashed” and made a “big mistake.”

“I thought I was doing things correctly for the sake of God,” she said, adding that she was “brainwashed once and my friends are still brainwashed.”

The newspaper says Muthana, during her time with ISIS, lived in their once-stronghold of Raqqa and was married to jihadists from Australia, Tunisia, and Syria – the first two of which have been killed in battle.

The al-Hawl refugee camp in northeast Syria, where Muthana is now being held. (Getty Images)

Muthana now has an 18-month-old son from one of her ISIS marriages. In her interview with The Guardian, Muthana also claims her parents were too strict on her in her upbringing, a factor that she says contributed to her decision to defect to ISIS.

“You want to go out with your friends and I didn’t get any of that,” she said. “I turned to my religion and went in too hard. I was self-taught and thought whatever I read, it was right."

Now Muthana is not allowed to leave the camp she is being held at and has to be escorted around by Kurdish fighters, more than 6,500 miles away from the Alabama city she once called home.