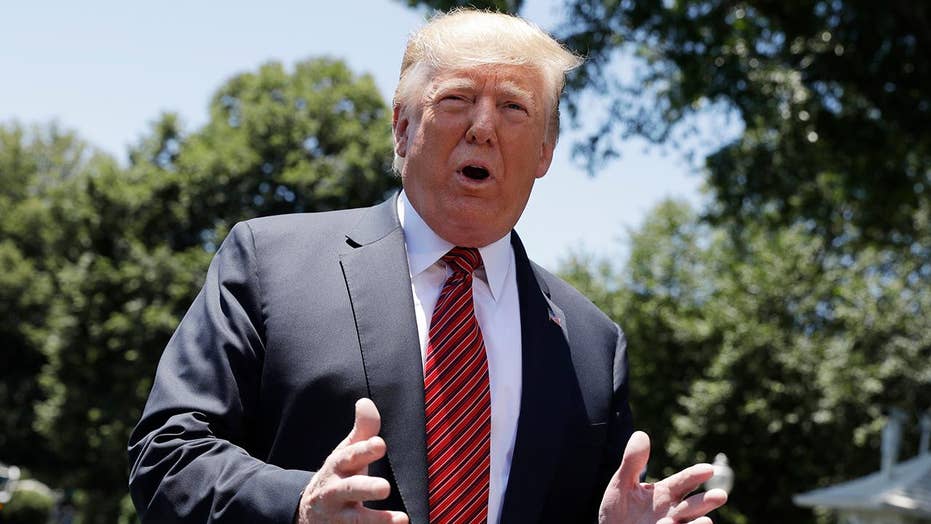 President Trump says 2020 Democratic hopeful Joe Biden is slower than he used to be, weak mentally

Trump tells reporters that he relishes the prospect of running against former Vice President Joe Biden.

President Trump unleashed an arsenal of insults Tuesday at Joe Biden as the potential 2020 foes headed to Iowa for a series of dueling political events, calling the former vice president "weak mentally" and claiming he hopes to run against him next year.

The president, as he departed the White House on Tuesday, blasted Biden as a “loser” and a “dummy.” This came as the front-runner for the Democratic presidential nomination embarked on a string of Iowa campaign visits where he plans to repeatedly swipe at Trump.

At the first of three events, Biden called the president an “existential threat to America.”

“This is a guy who does everything to separate and frighten people,” Biden said of Trump at a speech in Ottumwa. 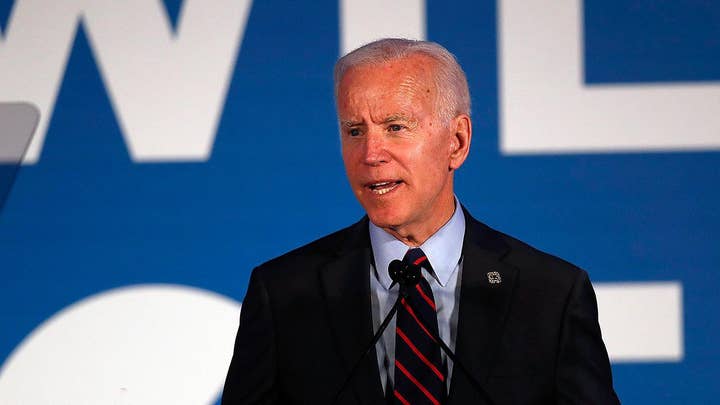 “Joe never got more than 1 percent except for when Obama took him off the trash heap,” Trump said, referring to the 2008 Democratic primary. “It looks like his friends from the left are going to overtake him pretty soon.”

Biden, though, is leading the Democratic primary field by double digits in recent national polls.

Nevertheless, Trump said he hopes to run against Biden in the 2020 general election.

“I’d rather run against, I think, Biden than anybody,” Trump said. “I think he’s the weakest mentally and I like running against people who are weak mentally.”

Trump, who will be 73 on Friday, has repeatedly said he would “easily” beat Biden in 2020 and has poked fun at the former vice president’s age while giving the 76-year-old new nicknames including “Sleepy Joe” and “1 percent Joe.”

Trump’s comments came ahead of his and Biden’s visit to Iowa on Tuesday. Biden’s campaign released his remarks for an event later Tuesday, where he plans to criticize Trump’s record with farmers and American families.

“America’s farmers have been crushed by his tariff war with China. No one knows that better than Iowa,” Biden will say. “He thinks he’s being tough. Well, it’s easy to be tough when someone else is feeling the pain.”

The president directly responded to Biden’s attack on Tuesday at the White House, saying he is “the best thing that has ever happened to farmers.”

“Nobody has treated farmers better than Trump,” he said. “The farmers are my best friend.”

Trump went on to blast Biden, a former vice president and a former senator from Delaware for almost four decades, as “a dummy” over his past remarks about China not being a “competitor” for the United States.

“China is a major competitor and right now, China wants to make a deal very badly,” Trump said. “It’s me right now who is holding up the deal. We’re either doing a great deal with China or we’re not doing a deal at all.”

Biden is expected to shift his stance on China, and plans to tell Iowans on Tuesday that the U.S. is “in a competition with China,” and that we need to “get tough.”

Biden’s trip to Iowa will be his second since launching his 2020 presidential campaign in late April and comes just two days after he skipped one of the first major 2020 events in the state on Sunday.

Biden was criticized for missing the Iowa Democratic Party’s Hall of Fame dinner, which was held Sunday in Cedar Rapids. Nineteen of the nearly two-dozen candidates spoke at the annual gathering.

Biden, though, at an event in D.C. on Monday, defended his choice.

“One of my competitors criticized me for not going to Iowa to talk for 5 minutes," he said according to a pool report. "My granddaughter was graduating. It was my daughter’s birthday. I would skip inauguration for that."

Meanwhile, Trump's trip will be to the western part of Iowa on Tuesday. The president plans to visit a renewable energy facility in Council Bluffs before headlining a state GOP fundraiser in West Des Moines.

Biden will campaign in the eastern part of the state, with stops in Ottumwa and Mt. Pleasant before giving his speech in Davenport.