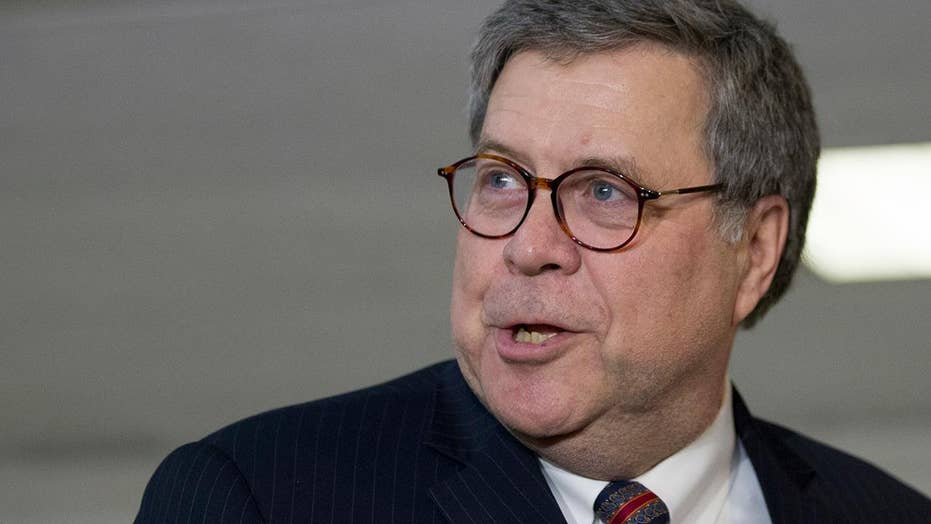 Will there be fireworks at William Barr's attorney general confirmation hearing?

Senate Democrats are expected to press Barr over his past criticism of Mueller's Russia probe.

Several Democratic senators thought to be potential presidential contenders in 2020 -- including Kamala Harris, Cory Booker, and Amy Klobuchar -- are set to grill William Barr, President Trump's attorney general nominee, during his confirmation hearings before the Senate Judiciary Committee on Tuesday.

Although the 68-year-old nominee is expected to ultimately win confirmation in the Republican-controlled Senate, Tuesday's questioning affords Democrats another major opportunity to send sparks flying and promote their own White House ambitions.

During now-Associate Justice Brett Kavanaugh's Supreme Court confirmation hearings late last year, Booker compared himself to the Thracian gladiator Spartacus and openly suggested he would be expelled from the Senate for defying a procedural norm, even though no one else raised that possibility. And Harris, in a dramatic made-for-social-media moment, openly suggested Kavanaugh was lying and hiding ties to Trump's inner circle, only to reveal hours later she had no evidence to back up her assertion.

Overseeing Tuesday's hearing will be Sen. Lindsey Graham, R-S.C., the new chairman of the Judiciary Committee, who excoriated Democrats during the Kavanaugh hearings for hiding -- then promoting -- a series of lurid, uncorroborated sexual misconduct allegations against the judge dating back decades.

Graham, who will lead off the hearing with an opening statement before each senator has approximately ten minutes to question Barr, has said he will ask the nominee for his thoughts on Special Counsel Robert Mueller's Russia investigation. Barr, as head of the Justice Department, would take over from acting attorney general Matthew Whitaker and oversee Mueller's work.

"I’m going to ask him, ‘Do you see any reason to fire Mr. Mueller based on what you know now for cause?’" Graham told "Fox News Sunday" host Chris Wallace. "‘Do you trust Mr. Mueller to be fair to the President and the country?’ ‘Will you make sure he can finish his job?’ ‘If you get the report, will you be as transparent as possible?’ I’ve asked him those questions, and I’m very comfortable with his answers."

Barr, who like Kavanaugh is a practicing Catholic, will tell the committee that he believes Mueller should be permitted to conclude his investigation and that he thinks Congress and the public should be able to see the results of Mueller's labor. Those statements, released ahead of the hearing, were aimed at pre-empting some of the most significant questions Barr will face from Democrats.

Separately, Graham sounded a note of caution to the Democrats he chastised during the Kavanaugh hearings.

“I’m going to let it be up to [Democrats]," Graham told Politico. "You pick these fights at your own peril. [Barr will] be challenged for sure. Hopefully respectfully."

In her own statement to the paper, Hawaii Democratic Sen. Mazie Hirono -- who has said Kavanaugh did not deserve due process because of his conservative beliefs -- countered: “I hope that Lindsey Graham can be the Lindsey Graham that I worked on immigration reform with, and not the Lindsey Graham who yelled during the Kavanaugh hearing.”

But the stakes are wildly distinct this time around, as Democrats seek assurances that Mueller will be allowed to continue his work. Whitaker has refused to recuse himself from overseeing the Russia probe that he had publicly said was nearing its legal limits. (House Democrats have ordered Whitaker to testify about that decision.)

"I would need a firm commitment that he wouldn’t allow any interference in the Mueller investigation --- that he will allow it to reach its conclusion and he will release his report to the public," Coons continued.

"What more assurance can he give to Democrats?" Grassley asked Monday evening on Fox News' "The Story with Martha MacCallum." He added: "If that's the big thing that's holding up their support of him, he ought to be able to get through the Senate like he did three times earlier in his career."

Barr's own comments about the Mueller investigation have attracted scrutiny, including an unsolicited memo he sent the Justice Department last year criticizing the special counsel's inquiry into whether Trump had sought to obstruct justice. Barr has asserted that the memo was narrowly focused on a single theory of obstruction and didn't touch the broader questions surrounding Russian election interference.

In his statement, Barr also called Mueller a friend he's known personally and professionally for 30 years. Barr's oversight is especially significant since Deputy Attorney General Rod Rosenstein, who appointed Mueller and who has overseen his day-to-day work, is expected to step down soon after Barr is confirmed.

Sen. Chuck Grassley weighs in on the battle over William Barr's nomination for attorney general.

The nominee must also convince Republicans he's sufficiently supportive of Trump's tough-on-crime and hardline immigration agenda, although there are no serious concerns he will have difficulty garnering the simple majority of votes necessary to win confirmation. Republicans currently hold 53 of the Senate's 100 seats.

Democrats will almost certainly grill Barr on the expansive view of presidential power he's displayed at the Justice Department and in the years since.

As deputy attorney general, Barr advised then-President George H.W. Bush that he did not need congressional approval to attack Iraq. Earlier, when he led the Justice Department's Office of Legal Counsel, he wrote opinions that allowed the U.S. government to invade Panama and arrest its dictator, Manuel Noriega, as well as to capture suspects without the consent of their host nations.

As attorney general in 1992, he endorsed Bush's pardons of Reagan administration officials in the Iran-Contra scandal.

Barr has discussed those decisions in depth in the past but may be pressed on them again, especially in the context of the Mueller investigation.

In the wake of the bipartisan criminal justice reform legislation that the White House has touted as one of Trump's signature achievements, Barr can also expect questions concerning his past work on criminal justice. During his first stint as attorney general, Barr advocated building more prisons, making penalties more severe and swift and using laws to keep criminals behind bars longer.

Now, Barr will tell lawmakers that he supports the First Step Act, the sweeping criminal justice overhaul. Trump has touted the law as a bipartisan effort to address concerns that too many Americans were imprisoned for nonviolent crimes as a result of the drug war. Barr opposed a 2015 bill that contained many of the same key elements as the First Step Act.

His prepared remarks show Barr will tell lawmakers that he would "diligently implement" the First Step Act. The measure "recognizes the progress we have made over the past three decades," he says.

Still, Barr says the Justice Department must "keep up the pressure" on chronic, violent criminals. Advocates fear Barr's views have not significantly changed since the early 1990s.

And, as the ongoing partial federal government shutdown over funding for Trump's proposed border wall drags on, immigration policy is also expected to take center stage on Tuesday.

In his prepared remarks, Barr says he'll continue to prioritize immigration enforcement and adds the government must be able to hold and remove people who illegally enter the country.

Sessions also used his authority to narrow the scope of possible asylum claims, which he charged were often fraudulent efforts to gain access to the U.S., rather than legitimate attempts to avoid particularized persecution based on protected characteristics like politics or religion.

Barr, based on his prepared remarks, will tell senators that the Justice Department cannot allow people to flout America's legal system by "crashing in through the back door."