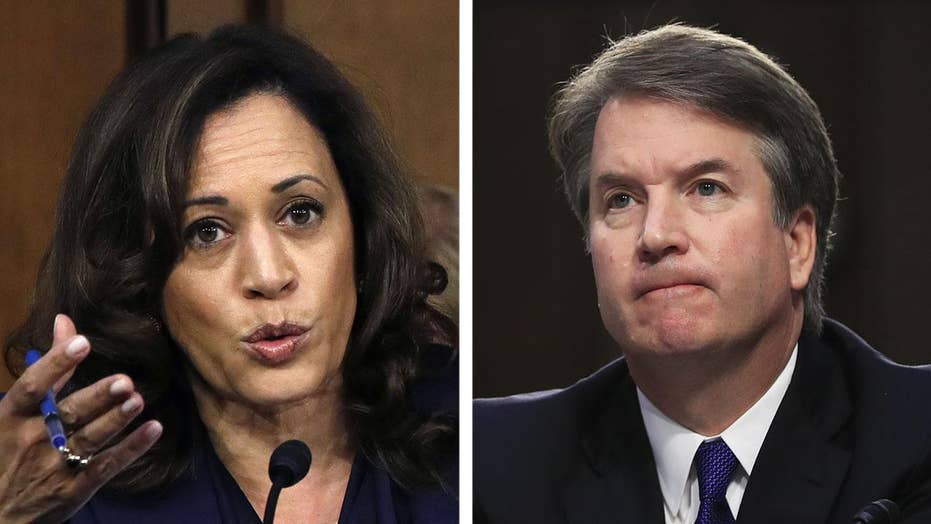 Supreme Court nominee Brett Kavanaugh's confirmation hearing boiled over into a series of tense exchanges late in the evening Wednesday, as high-profile Democrats lined up to hammer the appellate judge with thinly veiled accusations that he was hiding ties to President Trump's inner circle and harbored sympathies for racist policies.

In an especially combative moment late in the day, Sen. Kamala Harris, D-Calif., pointedly asked Kavanaugh whether he ever had discussed Special Counsel Robert Mueller or his Russia probe with anyone at Kasowitz Benson Torres, the law firm founded by Marc Kasowitz, a former personal attorney to President Trump.

"Be sure about your answer," Harris warned. "I'm asking you a very direct question. Yes or no?"

"I'm not sure I know everyone who works at that law firm," Kavanaugh said. "I'm not remembering, but I'm happy to be refreshed."

"How can you not remember whether or not you had a conversation about Robert Mueller or his investigation with anyone at that law firm?" Harris asked, visibly exasperated. "This investigation has only been going on for so long, sir, so please answer the question."

"I'm just trying to think -- do I know anyone who works at that firm?" Kavanaugh eventually replied. "I'd like to know the person you're thinking of."

"I think you're thinking of someone and you don't want to tell us," Harris shot back, sending the room into a few seconds of near-total silence.

Utah Republican Sen. Mike Lee then interjected briefly to defend Kavanaugh, saying that "this town is full of law firms" and that they "are constantly metastasizing, they break off, they form new firms -- they're like rabbits. There's no possible way we can expect this witness to know who populates an entire firm." 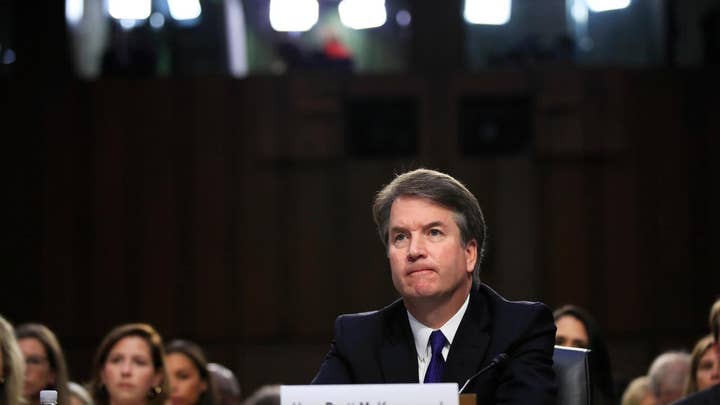 According to the firm's website, Kasowitz employs more than 250 attorneys, not including dozens of staff members.

A barrage of protesters erupted in a chant of "Answer the question" before being led out by police as Lee spoke. In all, 73 people were arrested and charged for unlawful demonstrations within Senate buildings on Wednesday, including 66 people who were removed from the hearing room during the day, according to Capitol Police officials.

In another dramatic exchange, Sen. Cory Booker, D-N.J., implied Kavanaugh had been open to racial profiling tactics, citing an email exchange between Kavanaugh and a colleague. However, Booker did not provide Kavanaugh a copy of the emails to review while questioning him about it, prompting another objection from Lee, who charged that it was inappropriate to "cross-examine" Kavanaugh about documents that he "can't see."

Booker countered that when Democrats received the emails, which he said were titled "racial profiling," they were marked "committee confidential," indicating that they contained sensitive information.

"The system is rigged," Booker said, arguing that the documents should not have been marked confidential, because they did not contain personal or national security information. "The process is unfair, unnecessary, unjust, and unprecedented on this committee."

Lee ultimately agreed that the emails should be released, but that Kavanaugh should still be able to review them: "There's no reason why this shouldn't be something we can't discuss in public -- I don't know why it was marked 'committee confidential,'" he said.

The emails, released later Thursday, showed Kavanaugh advocating for race-neutral security screening policies at airports in the immediate aftermath of the September 11 terrorist attacks, although he said that during an "interim" period before such policies could be implemented, administration lawyers would need to "grapple" with the possibility considering race during screening in the interests of national security. 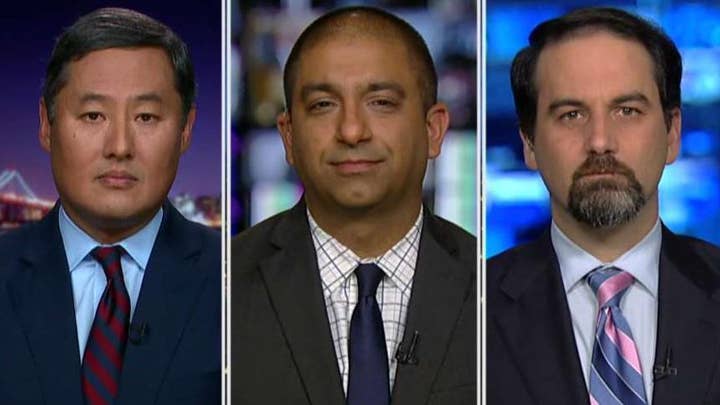 Also Wednesday evening, Hawaii Democratic Sen. Mazie Hirono pressed Kavanaugh at length about whether he was aware of inappropriate behavior by former 9th Circuit Judge Alex Kozinski when he clerked for Kozinski from 1991 to 1992. Kozinski abruptly retired last year after several woman who had worked as law clerks or colleagues accused him of sexual misconduct that included touching, inappropriate sexual comments and forced viewings of pornography in his chambers.

Hirono, who repeatedly has asked other judicial nominees whether they ever sexually harassed anyone, noted that Kavanaugh and Kozinski had kept in touch after his clerkship, with Kozinski recommending Kavanaugh during his 2006 confirmation hearings for his current job on the D.C. Circuit Court of Appeals.

"You saw nothing, you heard nothing, and you obviously said nothing," Hirono said, even as Kavanaugh denied being aware of any misconduct by Kozinski and said he would have reported it if he had known.

"I'm sorry about the circumstances, but we'll get through it."

For the most part, the lengthy hearing focused on Kavanaugh's writings and, in particular, key opinions he authored while serving on the nation's most prestigious appellate court.

At one point, Kavanaugh was asked by Louisiana Republican Sen. John Kennedy about the constitutionality of individual federal judges issuing nationwide injunctions against presidential action -- a phenomenon that has attracted scrutiny after district court judges unilaterally brought temporary halts to President Trump's travel ban and other initiatives. Kavanaugh demurred, saying he could not discuss potential pending issues before the Supreme Court.

After Nebraska Republican Sen. Ben Sasse decried what he said was the improper mixing of partisan politics with legal discussion during the hearing, he reiterated his arguments from Tuesday that Congress often delegates excessive authority to mostly unaccountable executive branch agencies.

In response, Kavanaugh specifically touched on the Obama-era Consumer Financial Protection Bureau (CFPB), saying that even if the agency was a good policy idea, its creation was an improper "departure from historical practice" because it employed a single director, rather than a committee, who could only be removed by the president for cause.

Kavanaugh wrote an opinion for a three-judge panel striking down the CFPB's structure as unconstitutional in 2016, but was later reversed in part by a 7-3 vote in an unusual en banc review by other justices on the D.C. Circuit Court of Appeals. The en banc review found the CFPB's structure to be constitutional, but agreed with Kavanaugh that one of the agency's major interpretive decisions had improperly violated due process requirements.

"A single person can make these enormous decisions?" Kavanaugh told Sasse on Wednesday, referring to the director of the CFPB. "From my perspective ... that was an issue of concern."

The confirmation hearing has been chaotic at times, with Democrats trying to delay the proceedings as they complain they haven't received enough records from Kavanaugh's past work.

Senate Majority Leader Mitch McConnell found a way to allow Wednesday’s confirmation hearing to continue into the night, after a brief floor clash with Senate Democratic leader Chuck Schumer, D-N.Y. Schumer had objected to McConnell’s request for the committee to continue meeting after 2 p.m., despite plans to go late. But McConnell, using a parliamentary maneuver, adjourned the Senate for the day -- because committees can meet as long as they like when the Senate is not in session.

KAVANAUGH VOWS TO 'KEEP AN OPEN MIND IN EVERY CASE' 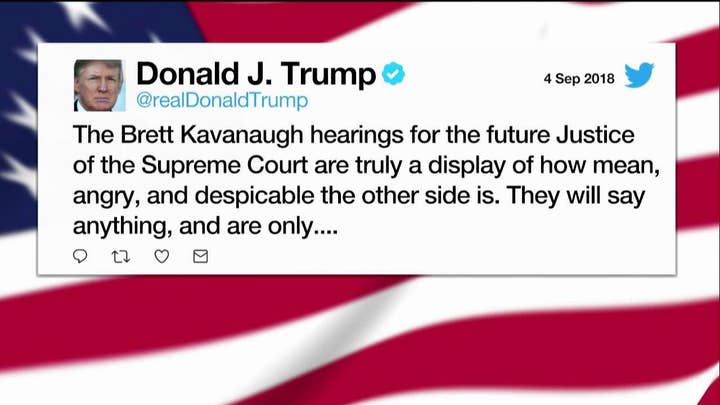 California Democratic Sen. Dianne Feinstein, the committee’s ranking member and the first Democrat to question the nominee, began her questioning of Kavanaugh by referencing the outbursts from protesters: “I'm sorry about the circumstances, but we'll get through it,” she said.

Feinstein asked the nominee about his past case argument that Washington D.C.’s assault weapons ban was unconstitutional. He said he was following the precedent of the Supreme Court, but acknowledged that gun violence posed significant policy concerns.

In his 2011 dissent in a follow-up to the landmark D.C. v. Heller case, Kavanaugh wrote that based on Supreme Court precedent, gun restrictions should be assessed principally by reviewing "text, history, and tradition," rather than a balancing analysis that mainly considers dangers to the public and the government's interest in regulation.

Kavanaugh wrote that there is "no meaningful or persuasive constitutional distinction" between semiautomatic rifles and semiautomatic handguns, rejecting the city's attempt to apply regulations to rifles, other than automatics, that could not constitutionally apply to handguns.

Feinstein also pressed Kavanaugh over the Roe v. Wade court decision regarding abortion. “Well, as a general proposition, I understand the importance of the precedent set forth in Roe v. Wade,” he said.

Later in the day, Sen. Richard Blumenthal, D-Conn., dismissed Kavanaugh's statements on Roe, saying that describing the case as important "existing Supreme Court precedent" was akin to callously introducing a woman as "my current wife," drawing a slight grin from Kavanaugh.

The nominee then stressed that "precedent on precedent" has since supported abortion rights, noting that the 1992 Supreme Court case Planned Parenthood v. Casey explicitly upheld Roe. But when pointedly asked by Blumenthal to vow to never overturn Roe, Kavanaugh reiterated that it would be inappropriate for nominees to the Supreme Court to discuss hypothetical cases during their confirmation hearings -- a view echoed by each sitting Supreme Court justice.

It was a recurring theme for Kavanaugh on the day, as he emphasized that he would remain an impartial jurist despite his personal views, both before and after the confirmation hearings. To argue that he can be trusted to be fair to all litigants, Kavanaugh cited his decision in the 2012 case Hamdan v. United States, in which he overturned the conviction of Osama bin Laden's personal driver, Salim Hamdan. The conviction, Kavanaugh said, violated the Constitution's Ex Post Facto provision by punishing a defendant under a system of military tribunals enacted after his alleged crimes.

“You'll never have a nominee who's ruled for a more unpopular defendant," Kavanaugh told senators Wednesday, saying that while Hamdan was a widely reviled Guantanamo Bay detainee, he was still entitled to some constitutional protections. 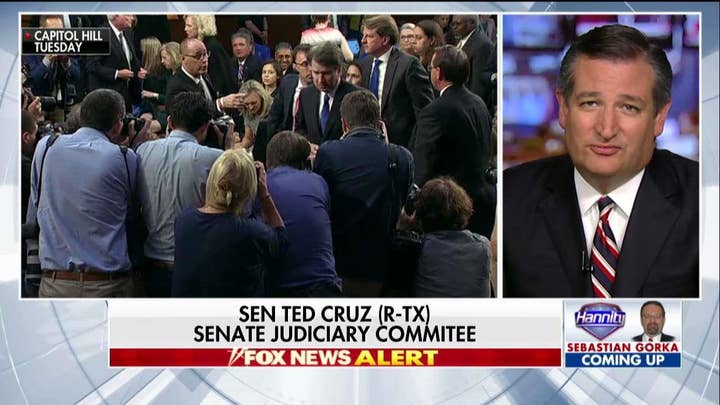 Feinstein also asked Kavanaugh about past comments regarding investigations involving a president, a key issue amid the Russia probe that has implicated numerous Trump associates. Kavanaugh said he’s never taken a position on the constitutionality of whether a president should be investigated while in office.

In response to later questions from Sasse, Kavanaugh emphasized that "no one's above the law," saying that while any criminal prosecution of a sitting president may face "timing" issues, there is no absolute constitutional prohibition against eventually pursuing such a prosecution.

Sen. Patrick Leahy, D-Vt., pressed Kavanaugh about what he knew about the Bush administration’s warrantless surveillance program. Leahy also asked Kavanaugh if a president has a right to pardon himself, a power President Trump has said he believes he has.

“The question of self-pardons is something I have never analyzed,” Kavanaugh replied.

Outbursts from protesters have been a recurring feature since the hearings began. Moments after Senate Judiciary Committee Chairman Chuck Grassley opened the hearing Wednesday, shouting could be heard from the back of the room: “Sham president, sham justice!” Ironically, at one point, protesters shouted as Kavanaugh discussed how he tried to be respectful in court. "I’ve tried to be a very collegial judge, I’ve tried to be civil," he said.

Kavanaugh served for more than a decade on the D.C. Circuit Court of Appeals and, before that, for five years as a lawyer in the White House Counsel's office in the George W. Bush administration. He also worked for independent counsel Ken Starr for three years during the probe that led to the impeachment of former President Bill Clinton.

Kavanaugh's elevation from the D.C. Circuit Court of Appeals to the Supreme Court would mark a generational rightward shift on the Supreme Court, raising the stakes beyond those of last year's nomination of Neil Gorsuch.

The judge's nomination, though, will ultimately succeed or fail depending on a handful of swing-vote senators, including vulnerable red-state Democrats and moderate pro-choice Republicans who have all said that they would withhold judgment on the nominee.