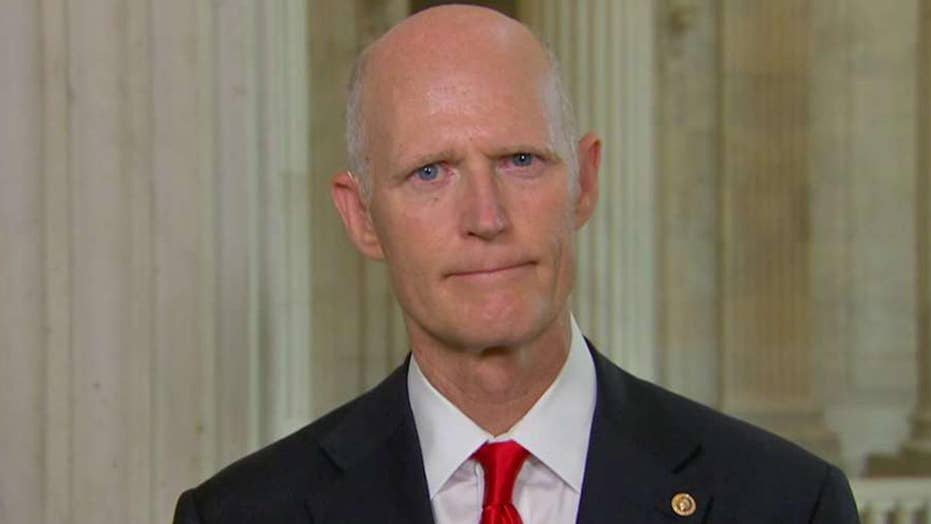 Sen. Rick Scott on military uprising in Venezuela: ‘We are going to have a Syria if we don't take this seriously’

Senate Republican Rick Scott reacted to the president's proposal to fight the immigration crisis and the United States' role in Venezuela's battle for power.

Sen. Rick Scott, R-Fla., weighed in on Venezuela’s  opposition leader Juan Guaido’s call for a military uprising to oust socialist leader President Nicolas Maduro on Tuesday, saying, “We are going to have a Syria if we don't take this seriously.”

Speaking on “America’s Newsroom,” Scott, who also serves on the Senate Armed Services Committee, said,  “Let the people of Venezuela dictate their future, not some faraway power. And if we don't, here’s what’s going to happen, we’re going to have a Syria. You got Russia, China, Iran, Hezbollah down there. So we have got to do everything we can to support Guaido."

"I'm hopeful by the end of the day that Maduro will be out of the country, he’ll be in Cuba, he’ll be in Turkey or someplace.”

On Tuesday, emboldened crowds took to the streets of Caracas – and around the country – after the 35-year-old leader of the opposition-led National Assembly and a small contingent of heavily armed soldiers appeared in an early morning video promoting the “final phase” of his putsch to oust Maduro.

The actions by the opposition are Guaido’s boldest effort so far to convince the military to rise up against Maduro.

Scott said he got a briefing on Tuesday from the White House and talked with some military members. He added, “I was down on the border of Venezuela, the Colombia border last week. I saw, you know, you see these moms with two or three kids sleeping on the street because they don't have a job and the only food they get is from a U.S. aid food station that gives them one meal a day and they're waiting (for) hours. So I'm hopeful. I'm hopeful that the military has come to their senses.”

When asked if he really thinks it’s possible that by the end of the day Maduro would be out of the country, Scott answered, “If the military does their job.”

He added, “I feel so horrible for the citizens down there and I see those little babies and their faces, not having enough food. The children walking for hours to get to a school because they want to get educated.”

“We have got to do everything we can, whether it's we got to use our military to get humanitarian aid in, but today I pray to God that Juan Guaido is the leader at the end of the day and Maduro is living someplace else.”

Scott later elaborated on his comment that there is a potential Syria-like situation in Venezuela, saying, “Look at who’s there. We got China there, you got Russia there, Hezbollah’s there, Iran’s there, Cuba’s there. You have all the bad actors.”

“And so if Maduro doesn't step aside, all these bad actors are going to get bigger and bigger and bigger. And what’s going to happen, it’s going to cause problems for Colombia, for Brazil, for Panama, for all the countries in South America and Central America and then what’s America going to do? Sit on the sidelines then? What are all the military from all those countries going to do? They are going to sit on the sidelines where you have terrorists like the [sic] bombing that happened in Bogota in January? No. We are going to have a Syria if we don't take this seriously and figure out how to get Maduro to step aside. China and Russia need to walk away.”

The bomber, identified as Aldemar Rojas, 56, also known as Mocho Kiko, was killed in the attack, according to Defense Minister Guillermo Botero.

Botero said Rojas was allegedly an explosives expert who had lost his arm manipulating explosives during his long career in the ELN rebel cell near the border with Venezuela.

On “America’s Newsroom” Tuesday, Scott also weighed in on President Trump’s call the night before for a sweeping overhaul to an asylum system he has long said is rife with fraud -- including a new fee to process asylum applicants, and the capacity to rapidly adjudicate applicants' claims while also barring them from working in the U.S. in the meantime.

“So we’ve got to figure out how we have an asylum system that does what it’s supposed to do, help those with asylum, not allow people to take advantage of the system.”

In a presidential memorandum, Trump specifically told Attorney General William Barr and acting Homeland Security Secretary Kevin McAleenan that sweeping overhaul to the asylum system was necessary to address a "crisis" at the border.

“We know we have a crisis at the border. The Democrats are sitting on the sidelines. They must think this is good politics for them," Scott said.

"I've been to the border. It’s not fair to our agents. They don't have enough people, they don’t have enough technology, they need barriers. The Democrats have got to start showing up and say ‘we have to secure a border.’”

He continued, "But the Democrats are on the sidelines. They must think this is good politics.”

Scott added, “I was down in Panama, in the Venezuelan border, Colombia and Buenos Aires last week. I met with DEA (Drug Enforcement Administration) agents and they were telling me (about) all the terrorists that they have found trying to cross the border. This was in Panama, trying to cross through Panama to get north through Central America to get to Mexico to get to the United States."

"We have to understand there are people that are coming (from) all over the world, some of them, they're wonderful people who want to do the right things, but some of them are there to harm us and so we’ve got to secure our border.”