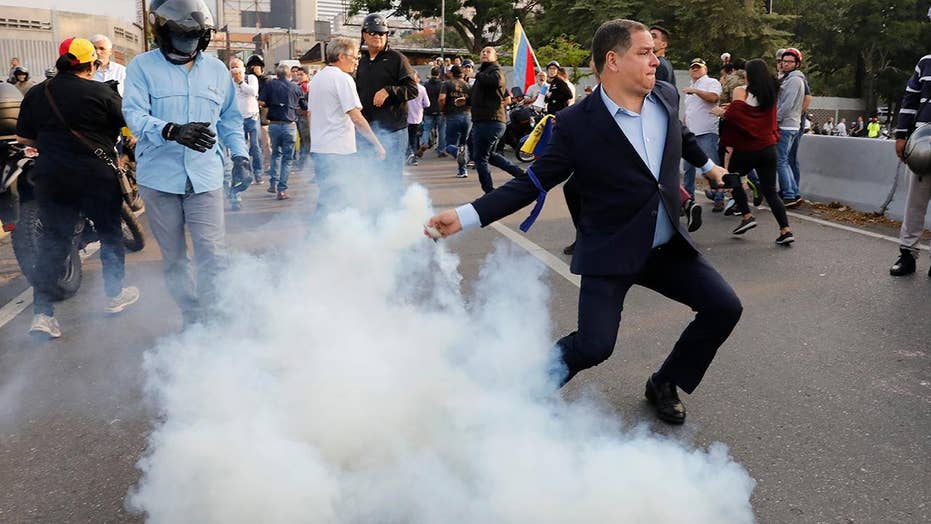 The power struggle between embattled Venezuelan President Nicolas Maduro and the opposition met its most bold action on Tuesday when Juan Guaido called for a military uprising to oust the socialist leader.

Emboldened crowds took to the streets of Caracas – and around the country – after the 35-year-old leader of the opposition-led National Assembly and a small contingent of heavily armed soldiers appeared in an early morning video promoting the “final phase” of his putsch to oust Maduro.

“The armed forces have taken the right decision,” Guaido said. “With the support of the Venezuelan people and the backing of our constitution, they are on the right side of history.”

He added: “The moment is now."

PHOTOS OF OPPOSITION UPRISING IN VENEZUELA

Secretary of State Mike Pompeo said on Twitter that the U.S. – which has backed Guaido since he declared himself interim president in January – fully supports “the Venezuelan people in their quest for freedom and democracy.”

“Democracy cannot be defeated,” he added.

The actions by the opposition are Guaido’s boldest effort to convince the military to rise up against Maduro.

In the three-minute video posted on his Twitter account, Guaido was joined by detained activist and his mentor, Leopoldo Lopez.

Speaking to reporters in his first public appearance since being detained in 2014 for leading anti-government protests, Lopez said he had been freed by the military and called on all Venezuelans to peacefully take to the streets.

“This is the moment of all Venezuelans, those in uniform and those who aren't," he said. “Everyone should come to the streets, in peace."

Opposition leader Leopoldo Lopez, center, is seen surrounded by supporters outside La Carlota air base in Caracas, Venezuela, Tuesday, April 30, 2019. Lopez, who had been under house arrest for leading an anti-government push in 2014, said he had been freed by soldiers and called for a military uprising.  (AP)

Foreign Minister Jorge Arreaza claimed on Tuesday that the U.S. likely paid a guard to allow Lopez to escape house arrest as part of an effort to oust Maduro. He said the uprising will soon be contained.

As Lopez spoke on a highway overpass, troops loyal to Maduro sporadically fired tear gas from the adjacent Carlota air base as the crowd of a few hundred civilians, some of them brandishing Venezuelan flags.

The crowd swelled to a few thousand as people sensed what could be their strongest opportunity yet, to overthrow the government after months of turmoil that has seen Maduro withstand an onslaught of protests and international pressure.

"It's now or never," said one of the young soldiers, his face covered in the blue bandanna preferred by the few dozen soldiers who stood alongside Guaidó and Lopez.

Later, a group of security forces on motorcycles dropped tear gas to clear the bridge, prompting an exchange of what appeared to be gunfire. There were no immediate reports of injuries. 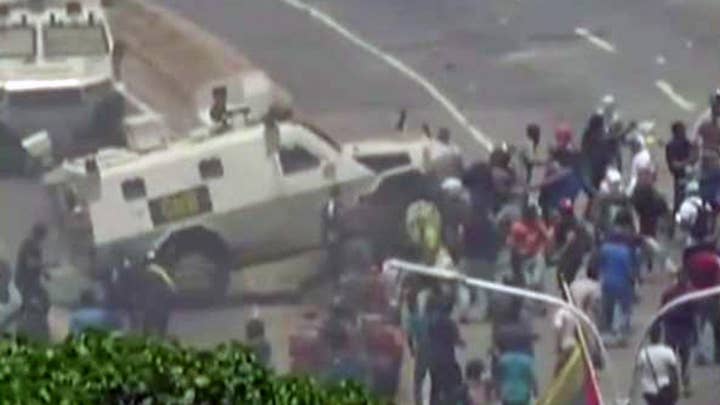 In dramatic footage from the Caracas, Guaido supporters are shown clashes with Venezuelan security forces. At one point, one military vehicle was seen plowing into the crowd and running over at least one person.

Venezuela's opposition leader and self-proclaimed President Juan Guaido stands above supporters as he addresses them outside La Carlota military air base in Caracas, Venezuela, Tuesday, April 30, 2019. Guaidó has taken to the streets with activist Leopoldo Lopez and a small contingent of heavily armed troops early Tuesday in a bold and risky call for the military to rise up and oust socialist leader Nicolas Maduro. (AP Photo/Fernando Llano)

Anti-Maduro protests are planned for Wednesday, including what Guaido has said will be “the largest march in Venezuela’s history,” part of what he calls the “definitive phase” of his effort to take office in order to call fresh elections.

The dramatic events were downplayed by government officials, who said it was an attempt by a “subversive movement” to generate “panic and terror,” Defense Minister Vladimir Padrino said on Twitter.

“We reject this coup movement, which aims to fill the country with violence,” he said.

Soldiers take a position on an overpass next to the La Carlota air base in Caracas, Venezuela. (AP Photo/Ariana Cubillos)

Maduro himself, later tweeted, that he had spoken to the commanders of the military, who have "expressed their total loyalty to the people, the constitution and the country."

"Nerves of steel!" he wrote. "I have called for maximum popular mobilization to ensure the victory of peace. We will win!"

PENCE CONFRONTS VENEZUELAN AMBASSADOR AT UN: ‘YOU SHOULDN’T BE HERE’

Meanwhile, socialist party chief Diosdado Cabello said most of Caracas was calm and called on government supporters to amass at the presidential palace to defend Maduro.

"We're going to Miraflores palace to defend the revolution, to defend Nicolas and to defend the legacy of Hugo Chavez," Cabello said in a phone call to state TV.

Far from the tense events, a few dozen people gathered in the streets downtown in support of Guaidó amid conflicting reports that the city's subway had been shut down by transit workers looking to further debilitate the government. Others said service had been interrupted by an accident.

Guaido, the leader of Venezuela's opposition-controlled National Assembly, invoked the constitution to assume an interim presidency in January, triggering a power struggle with Maduro. He has the support from about 50 countries, including the United States and several European nations, who have disavowed Maduro’s presidency.

Meanwhile, Maduro, who is backed by Russia and China, calls Guaido a U.S.-backed puppet who seeks to oust him in a coup. He has appeared to retain control of state institutions and the loyalty of senior military officers.

PENCE DECLARES SUPPORT FOR VENEZUELA PROTESTERS RISING UP AGAINST MADURO: 'WE ARE WITH YOU!'

Leaders from around the world reacted to the demonstrations in Venezuela.

In the United States, Vice President Mike Pence sent a message to Guaido and his supporters via Twitter.

"To Juan Guaido, the National Assembly and all the freedom-loving people of Venezuela who are taking to the streets today in #operacionlibertad—Estamos con ustedes! We are with you! America will stand with you until freedom & democracy are restored. Vayan con dios!" he wrote.

"Venezuelans have made clear that the current path toward democracy is irreversible," he said on Twitter.

On Twitter, Arreaza attacked the Trump administration, saying that the “heads of the coup d’état admit their responsibility without scruples.”

“The Trump administration, in its despair, attempts to spark an internal conflict in Venezuela,” he wrote while sharing Bolton’s tweet. “Venezuela’s democratic institutions guarantee peace in the country.”

The ambassador to Washington representing Guaido sand the U.S. played no role in coordinating the uprising against Maduro.

Carlos Vecchio said in a news conference that the protest "is a movement headed by Venezuelans" and the U.S. didn't intervene.

At the now-shuttered Venezuela embassy in the Georgetown area of Washington, D.C., supports of Guiado gathered to protest the Maduro activists who had been camped out inside.

Police blocked off the roads, and Secret Service officers were called to the scene as the crowds grew.

Activists from the liberal group Codepink, who protest the U.S.’s support for Guaido, have been protesting at the embassy. One sign hanging from the building reads: “Nicolaus Maduro is the president.” One person held a sign that said, “U.S. hands off Venezuela.”

“Today is the day the Venezuelans are taking over the country,” one pro-Guaido protester, 40-year-old Giuliano Gandullia, who was born in Venezuela, told Fox News.

The spokeswoman's for Spain's acting government said it did not support any military coup in Venezuela, even though it still considered Guaido the country's legitimate leader.

"We hope with all of our strength that there is no bloodshed. We support a peaceful democratic process in Venezuela. We support the immediate holding of an election for a new president," Isabel Celaá said on Tuesday during a weekly routine press briefing.

White House: We stand with the people of Venezuela and Juan Guaido

President Vladimir Putin is said to be paying "significant" attention to the reports about "a coup attempt in that country," Kremlin spokesman Dmitry Peskov was quoted as saying by Russian news agencies.

Elsewhere, Bolivian President Evo Morales issued a call via Twitter Tuesday urging Latin American governments "to condemn the coup d'etat in Venezuela and keep the violence from claiming innocent lives." He blamed the U.S. for "provoking violence and death in Venezuela."

Cuban Foreign Minister Bruno Rodríguez also sent a tweet backing Maduro and calling on the U.S. to "halt aggressions against the peace."

The Venezuelan government has arrested Guaido's top aide, stripped the opposition leader of his parliamentary immunity and opened multiple probes against him. He has also barred him from leaving the country - a ban that Guaido openly violated earlier this year when he traveled to several Latin American countries seeking foreign support.