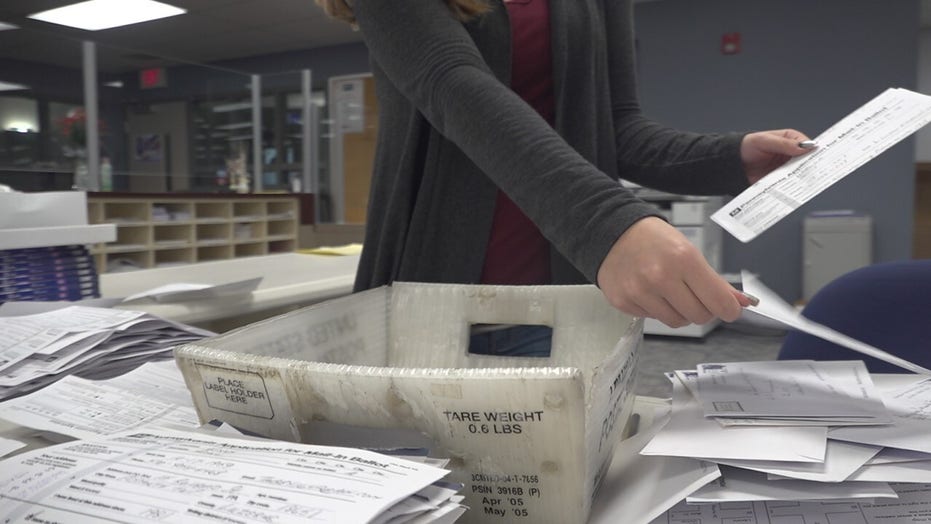 Three critical swing states are facing another mail-in ballot challenge. In Pennsylvania, Michigan, and Wisconsin workers are not allowed to prepare and scan ballots before Election Day - a process called pre-canvassing.

Plagued by a global pandemic, postal stoppages, state law changes, and confusion – many of the 9 million U.S. citizens eligible to vote from outside the country worry they won’t get their say in the 2020 presidential election.

“This has been a challenging election,” Susan Dzieduszycka-Suinat, president and CEO of the nonprofit U.S. Vote Foundation and Overseas Vote, which endeavors to help Americans abroad, told Fox News. “As more issues regarding changes in the United States Postal Service [USPS] processes and evidence of slowdowns and international suspensions in service emerged, concern and outright anxiety embraced the overseas voting populace.”

According to Dzieduszycka-Suinat, the deluge of worry from voters has centered on their ability to cast a timely ballot.

“The [questions] started coming in a steady stream earlier this year as the voters realized their usual letters and packages to and from the U.S. were not being delivered in a timely manner,” she continued. “It was obvious to Americans living abroad that something had gone very wrong.”

Compounding the concerns and confusion is the notion that in some parts of the world, mail has halted altogether. USPS has curbed international mail services in at least 38 countries as a result of “Foreign Postal Operator Service Suspension,” “Unavailability of Transportation,” or “Suspension of Global Express Guaranteed Service.”

USPS also lists hundreds of “disruption information” memos regarding services from dozens of other countries – from Australia to the Democratic Republic of Congo and Mexico to Thailand – throughout the course of the year.

Recent notices include the government extension curfew until Nov. 1 in Jamaica, where it is “affecting the quality of service for all types of mail, including inbound and outbound letters, parcels and express mail service items,” or Panama’s post advisory last month “that the suspension of inbound and outbound international flights has been extended until mid-October and airlines are not transporting international mail dispatches until further notice. Transit services also continue to be suspended.”

Deepening the anxieties of those overseas are the question marks of whether their ballots will make it home in time amid the slowness and sputtering of mail due to the coronavirus pandemic.

In Hong Kong – a city more than 85,000 Americans call home – a postal operator in August announced that snail mail home could take upwards of three months. Adding to the already tight timing, registering to vote in some states – such as New York – mandates the additional step of signing and mailing the paperwork, and they do not accept electronic signatures. For some, that made the Oct. 9 registration deadline all but impossible.

And in Europe, there have been differing layers of confusion, country to country and then home state to state. Some were informed from tracking services that their packages could take weeks to arrive; others lamented that they were turned away at the embassy and perplexed as to why.

However, USPS officials remain confident that the organization is up for the task.

“With a record number of people across the country voting by mail, the U.S. Postal Service’s No. 1 priority between now and the November election is the secure, timely delivery of the nation’s Election Mail,” a spokesperson for USPS told Fox News. “The Postal Service is fully committed to fulfilling our role in the electoral process when public policymakers choose to utilize us as a part of their election system, and to delivering Election mail in a timely manner consistent with our operational standards."

USPS stressed that voters covered by the Uniformed and Overseas Citizens Absentee Voting Act (UOCAVA) – a 1986 law requiring that the states and territories allow certain groups of citizens to register and vote absentee in elections for federal offices – “should monitor possible service disruptions to foreign countries, including service disruptions due to COVID-19.”

But since UOCAVA’s enactment more than three decades ago, it has been subject to hundreds of lawsuits claiming issues of accessibility.

Other Americans abroad have taken to Twitter to express their grievances over navigating a process they had previously done numerous times. Some bemoaned incorrect URLs and mailing addresses issued on their absentee forms, prompting local commissions to take action. Postal sluggishness stateside has also multiplied woes over whether one’s submission will slip through the cracks in a timely enough fashion.

Compounding the hurdles amid the COVID era are the various curfews and economic closures in different countries, often on an arbitrary basis. Sometimes it is big things like no mail or no ability to take transport to the nearest embassy or consulate, to seemingly smaller but vital things like the closure of printing stores. In some situations, even dropping off a ballot at the nearest embassy or consulate is no longer an option given temporary coronavirus closures.

“The pandemic affected the U.S. embassy and consulate network, limiting even essential services,” Dzieduszycka-Suinat underscored. “That meant that not only was voting assistance and the option to return ballots through the diplomatic post affected, so were other services, such as acquiring social security numbers, passports and visas.”

“Any barriers experienced by a UOCAVA voter vary depending on their location, access to resources, training opportunities, and the availability of voter assistance. Voters have expressed concerns over returning their voted ballot by mail due to local country COVID-19 restrictions.,” he said.

Under federal law, any U.S. citizen residing abroad has the right to vote by absentee ballot for the president, vice president and congressional representative. To do so, they must first be registered to vote in their last state of residence, even if they may no longer have ties to an address there.

Reading, PA - September 28: A detail photo of the section of the ballot with the selections for President. Joseph R. Biden, Donald J. Trump, , and Jo Jorgensen. Mail in Ballot materials for the Nov. 3, 2020 election, photographed at the Election Services Office for Berks County Pennsylvania, in Reading, PA Monday morning September 28, 2020. (Photo by Ben Hasty/MediaNews Group/Reading Eagle via Getty Images)

However, elections are operated by the states: Each state has its own rules, regulations, cut-off dates, and identification mandates – making it crucial for each citizen to research well in-advanced what is required of them. Those who were born in a foreign land, but are U.S. citizens, also have that constitutional right – but some states such as New York still require an individual to first travel to the U.S. and establish a residence in order to register.

The majority of states allow online registration, but several — including Ohio, Pennsylvania, Michigan, and Wisconsin — mandate mail-in ballots only. There are others that permit email or faxed ballots.

Moreover, some citizens can cast a vote at a diplomatic dwelling, but around half the states do not permit that. Some states will not accept ballots that arrive after the polls close on Nov. 3, whereas others have set time periods of admission after Election Day, providing the envelope is postmarked by Election Day.

U.S. military personnel and their families stationed overseas also have their own voting process, with different advised mailing dates, and it is handled on a federal level.

“Overseas military mail continues to move regardless of international postal disruptions. Overseas military and other citizens with military post office access can drop off their voted ballots free of charge if they use the postage-paid envelope template available on fvap.gov,” Beirne explained.

Evette Kessler, a military spouse in Grafenwoehr, Germany, and a Nevada residence, said in her experience, 2020 was relatively smooth sailing.

“We received our absentee ballots, filled them out, and sent them off,” she said. “From what I see over here, most of the people I know have cast their absentee ballot votes. Everyone wants to be heard in the most important election in our lifetime. The biggest worry so far has been the possibility of our ballots being thrown away by mail carriers.”

The unique challenges of 2020 for most could make voting this time around all the more cost-prohibitive for some.

In the midst of concerns surrounding the timing and the mail service, courier companies such as FedEx announced in late summer that they would offer discounts on next-day deliveries from several European nations – but even that begins at around $30. The likes of Dzieduszycka-Suinat have contended that courier costs are still too high to be considered fair or reasonable.

Historically, voter turnout by those outside the U.S. has been meager – but it remains to be seen if the bumps of 2020 will drive more citizens from jumping through the hoops or if the fraught and polarizing nature of this cycle, in particular, will compel more to go the extra mile.

Harris County election worker Jose Vasquez prepares mail-in ballots to be sent to voters Tuesday, Sept. 29, 2020, in Houston. To be allowed to vote by absentee ballot in Texas, voters must be 65 or older; have a disability; or be outside the county where you're registered to vote on Election Day and during early voting. (AP Photo/David J. Phillip) (AP)

FVAP data shows that there are around 2.9 million Americans qualified to vote from outside. But in the 2016 election, just 7% voted, a sharp contrast to the 60.2% who took to the polls on U.S. turf. Yet it may well be that small slice that makes all the difference between a Donald Trump or Joe Biden White House.

The current traffic to FVAP.gov for the 2020 calendar year is approximately twice the level of 2016, Beirne said, adding, “This does not necessarily correspond to an increased level of interest.”

Dzieduszycka-Suinat noted that compared to 2016, they are seeing a 150% increase in website traffic for voter help from countries outside the U.S., which she views as an “excellent indication of greater participation.”

“Without question, the greatest concerns have been around the postal system and what it means for ballot receipt and return. When a core component of our country’s basic commercial and international operations is suddenly in a state of dysfunction, it implies that something may not be quite right at home,” she added. “It is an irony, but living abroad often brings Americans closer to their home country through their broadened awareness of our country’s impact on the world.”