Pompeo: Nothing changes my suspicion that coronavirus came from Wuhan lab

Former Secretary of State Mike Pompeo tells 'America's Newsroom' he does not buy the World Health Organization's conclusion that coronavirus spread from animals to humans.

Former Secretary of State Mike Pompeo said "significant evidence" remained that the coronavirus originated in a Chinese laboratory, casting doubt Tuesday on the World Health Organization's assessment that it likely spread from animals to humans.

Pompeo told "America's Newsroom" that the Trump administration had left the WHO because it was "corrupt" and said he hoped that China's influence over the organization hadn't affected its conclusions on the origins of the deadly virus.

"I must say the reason we left the World Health Organization was because we came to believe that it was corrupt," Pompeo said. "It had been politicized. It was bending a knee to General Secretary Xi Jinping in China. I hope that's not the case here with what they've announced today."

The WHO announced its initial findings during a news conference Tuesday but stipulated additional research and investigations were required.

Pompeo said he hoped the WHO team was allowed to interview Wuhan doctors and technicians away from potential interference by the Chinese Communist Party, which has disseminated conspiracy theories about the virus's origins, such as suggesting the U.S. Army was behind its initial spread.

"I hope they got to see all the data, all the science, into the lab, talk to the doctors, interview them in private, in places where they could actually tell the truth about what took place," he said. "Not under the supervision of a Communist Party person sitting in the back of the room making sure that they toed the Communist Party line. I look forward to seeing their results. I continue to know that there was significant evidence that this may well have come from that laboratory."

The Wuhan Institute of Virology has collected extensive virus samples, leading to allegations that it may have caused the original outbreak by leaking the virus into the surrounding community. China has strongly rejected that possibility and even promoted conspiracy theories that the virus originated elsewhere. The team is considering several theories for how the disease first ended up in humans. 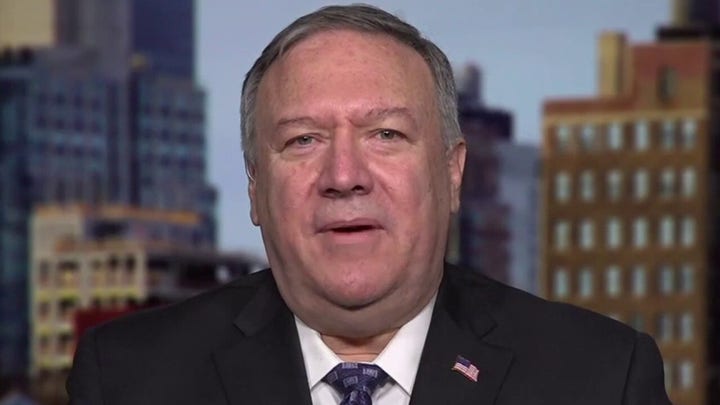 Initially dismissed as a conspiracy theory when Sen. Tom Cotton, R-Ark., floated the notion it came from a Wuhan superlab, even the Washington Post editorial board wrote last weekend that the idea needed to be investigated. China covered up the virus at the beginning of the outbreak and silenced journalists and doctors who tried to sound the alarm.

Pompeo led an aggressive policy against China while in the Trump administration, which included labeling its horrific treatment of the Uighurs a "genocide." The Trump administration steadily ramped up pressure on Beijing in 2020, imposing sanctions on officials and companies for activities and Taiwan, Tibet, and the South China Sea. Such penalties have been ramped up as the White House has blamed China for covering up information about Covid-19.

"We shouldn't worry about General Xi Jinping's feelings," he said. "We should worry about protecting the American people ... We have to confront the challenge that the Chinese Communis Party is presenting to America and to the world."