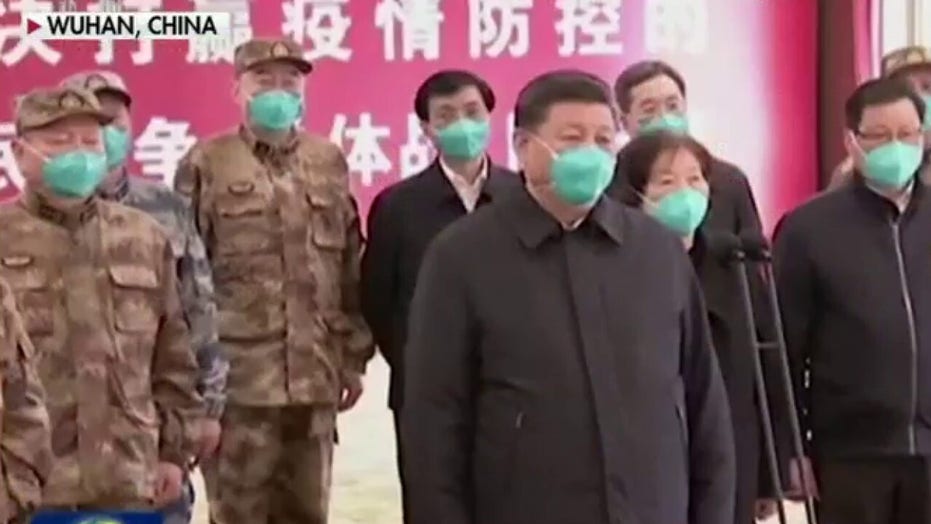 China is falsely accusing the United States of being responsible for the coronavirus pandemic, in an effort to ignite hatred against the U.S. and deflect blame from Chinese leaders.

Chinese Foreign Ministry spokesman Lijian Zhao, who also serves as deputy director-general of the ministry’s Information Department, effectively claimed Thursday that the U.S. is waging germ warfare against his country.

“When did patient zero begin in US?” Zhao tweeted. “How many people are infected? What are the names of the hospitals? It might be U.S. army who brought the epidemic to Wuhan,” the Chinese city where the coronavirus outbreak began.

In a similar vein, Zhao’s boss, Foreign Ministry spokeswoman Hua Chunying, on Thursday twisted testimony of Centers for Disease Control and Prevention Director Dr. Robert Redfield in an apparent attempt to show that the coronavirus was American in origin.

Hua’s tweet falsely stated: “@CDCDirector Dr. Robert Redfield: Some cases that were previously diagnosed as Flu in the US were actually #COVID19. It is absolutely WRONG and INAPPROPRIATE to call this the Chinese coronavirus. https://www.c-span.org/video/?c4860650/user-clip-diagnosed-flu-covid-19 …”

The grossly irresponsible comments of Zhao and Hua are not isolated. The Chinese Foreign Ministry has been tarring America for more than a month.

For instance, Hua charged in the beginning of February that the U.S. had “unceasingly manufactured and spread panic” about the coronavirus. Furthermore, she accused the U.S. government of not offering “any substantial assistance.” If fact, China had rejected a series of American offers of assistance going back to January.

The Chinese Communist Party’s Global Times newspaper, referring to the pandemic, has charged the Trump administration with “immoral” conduct. The tabloid is technically unofficial, but it is controlled by People’s Daily, the most authoritative publication in China. The Global Times has been used by Chinese leaders to propagate nationalist narratives, while retaining deniability.

Hotheaded Chinese social media posters have certainly heard the signal from the Communist Party. They have made explicit the charges against America, and Beijing’s censors have left up these postings, signaling official approval of the explosive accusations.

This is a dangerous move by the Chinese government. This is how great tragedies begin.

China needs an enemy to blame because the Communist Party’s inhumane and incompetent handling of the coronavirus outbreak has left many Chinese people white-hot angry.

To make matters worse for leaders in Beijing, many Chinese believe the virus either was deliberately released or accidentally escaped from the Wuhan Institute of Virology, a P4-level bio-safety facility.

This lab, known for studying coronaviruses, is not far from the market that had been initially identified as the source of the outbreak. To deflect these rumors regarding the institute, Beijing is suggesting an American source.

The Chinese Communist Party faces an existential crisis. Across China, there is now a growing demand for fundamental political change. And people are losing their fear of criticizing the Communist Party.

Sun Chunlan, a Chinese vice premier, heard cries of “fake” as she toured Wuhan on March 5 in an unusual show of anger that disrupted the staged event, the South China Morning Post reported.

And as the Nikkei Asian Review reported, a “gratitude education campaign” in the stricken city to thank Chinese ruler Xi Jinping was greeted by a “massive outpouring of anger and frustration” that led to the quick end of the misconceived effort.

Yet even if Shih, who is based at the University of California at San Diego, is correct, Beijing is rewriting recent history to create a justification for lashing out at the United States. After all, Chinese leaders are clearly behind the campaign accusing America of a hideous act of war.

Anything can happen in China. The country, both before and after the establishment of the People’s Republic in 1949, has gone through periods of extreme anti-foreigner turmoil.

This time, a Chinese leader is whipping up such sentiment. The same thing happened during the Cultural Revolution – the decade-long campaign starting in 1966 – and the Boxer Rebellion, which erupted at the turn of the 20th century.

This is a dangerous move by the Chinese government. This is how great tragedies begin.