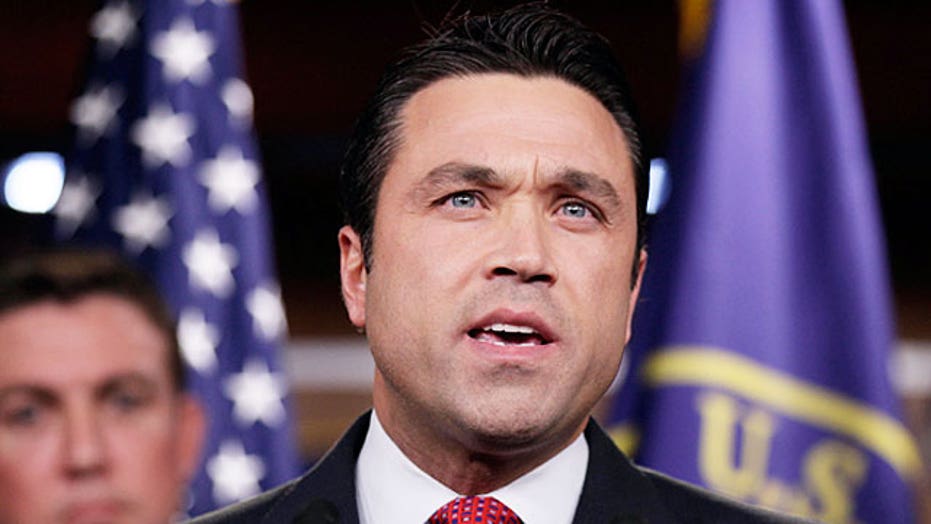 Don’t write him off.

Despite facing a 20-count indictment, New York Republican Rep. Michael Grimm remains a contender for re-election in his Staten Island district – thanks in part to a Democratic challenger whose candidacy is flawed in its own right, and some constituents who seem unfazed by the federal charges against their congressman.

Grimm, a tough-talking, occasionally short-fused former FBI agent, actually has weathered two PR fiascos this year. First, he was caught on camera in January threatening to “break” a reporter asking unwelcome questions “in half” (he later apologized). Then, he was indicted in April on 20 counts of alleged tax fraud and other charges. He was accused of evading the IRS and making over $1 million in revenue "disappear," as well as hiring undocumented workers, at a Manhattan restaurant he owned.

“This race is a good lesson in not jumping to conclusions or making assumptions based on headlines and even legal problems,” said Nathan Gonzales, deputy editor of the Rothenberg Political Report.

Grimm might have caught a break in his competition, an attorney who is seen by some as an outsider from Brooklyn known for his gaffes. Recchia's political flubs have made national headlines – and earned him the scorn of a recent segment on “The Daily Show with Jon Stewart.”

Strategists say, combined with a general desensitization to scandal, it’s a perfect storm for Grimm.

Grimm himself has publicly referred to the indictment as a "political witch hunt".

The congressman once compared the charges to attacks from enemy fire he endured as a Marine, saying he didn't abandon his post then and, "I'm not abandoning my post now."

In an interview in August with Fox Business Network, Grimm said he was optimistic. "We are running full steam ahead, and I plan on being their congressman for quite a while to come -- as long as they'll have me."

And he took a shot at his rival: “They don't have a good candidate and that certainly helps."

Neither Recchia’s campaign nor Grimm’s responded to a request for comment for this article.

A recent New York Daily News article took the pulse of constituents, many of whom said they consider Grimm a good guy who serves their district well, noting he helped bring recovery money to the area after Hurricane Sandy.

“Like any restaurant, there’s a lot of off-the-book payments,” Mike Zamuliski, 26, a college student, told the Daily News. “The indictment is dirt-smearing. The media is trying to make him look bad.”

One dynamic that might help keep Grimm’s campaign alive is the fact that he’s a Staten Island candidate running against someone from Brooklyn in a district made up predominantly of Staten Island voters.

But some wonder whether Recchia’s camp could have been more aggressive in bringing Grimm’s turbulent year to light in an effort to turn voters against him.

“In retrospect, I wonder, if Democrats fall short, if they should have gone with a multi-pronged attack against the congressmen instead of assuming the court case at hand would be the silver bullet,” Gonzales said.

Democratic strategist Jessica Tarlov said Recchia’s campaign has failed to capitalize on Grimm’s recent scandals. She said Grimm’s indictment could have created a real opportunity for Recchia. “They should, they just haven’t. I don’t think he is a bad candidate, I think he is playing the game badly,” Tarlov said.

The dynamic has even Republican strategists startled. Thomas Basile, former executive director of the New York state GOP, said he is shocked to see Grimm pull through in polls. “Oddly enough, Grimm will hang on,” he predicted, acknowledging recent controversies seem to not affect Grimm’s constituents. “It’s a sad commentary on the state of politics -- people are sort of numb to this.”

Basile argues that while Grimm may be a troublesome candidate for Republicans, the Democratic challenger has done little to turn New York’s 11th Congressional District blue.

“If you’re a Democrat and Jon Stewart of ‘Daily Show’ is making fun of you because you don’t know basic things about issues -- you’ve got a problem,” he said.

Despite Grimm’s slight lead in the latest poll, the race is still considered airtight, and hardly a lock for the embattled incumbent.