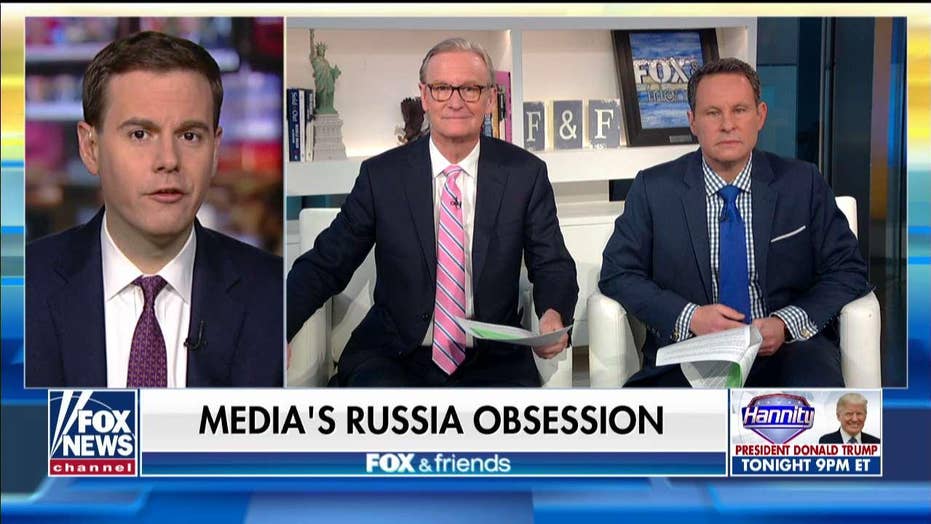 Benson: Some in Media Still 'Emotionally Invested' in Collusion Narrative, 'No Matter How Farcical'

“For some people who are so emotionally invested in the opposite outcome, it seems like they are just desperate to bring the Russia story back. No matter how farcical, including casting aspersions on the Stanley Cup champion teams captain being under the same roof as the president. It's ludicrous,” Benson told “Fox & Friends” Wednesday.

The Washington Capitals, the reigning Stanley Cup champions, visited the White House Monday to celebrate their championship with President Trump.

Ovechkin, the team’s captain and playoff MVP, is Russian. Two of his teammates are Russian and he has in the past said he supported his home country and President Vladimir Putin.

DONNA BRAZILE: WE NEED TO SEE FULL MUELLER REPORT TO GET COUNTRY 'BACK ON SAME PAGE,' PROTECT FROM FUTURE ATTACKS

The New York Times wrote an article Monday about the visit with the headline: “Washington's Most Popular Russian (and His Teammates) Honored at the White House.” The story made mention of the popular hockey star’s relationship to Putin.

“[Ovechkin] has some relationship with Vladimir Putin. He was in the Trump White House and some media outlets decided that that was worthy of a headline and a story, which is beyond parody frankly,” Benson said.

The co-host of Fox News Radio’s “Benson & Harf” also noted Democrats continue to call for the full Mueller report to be released, a notion he supported, but they should not expect any different conclusions than what Attorney General William Barr released in a four-page summary Sunday.

“If Barr were in any way distorting the fundamental finding of no collusion I think we would have heard from Robert Mueller already, he's corrected the record a few times when he feels like things are unfair,” Benson said. “If someone at the very top of the government were misrepresenting what he found on collusion I think he would say something about it and he hasn't.”

Benson believes that Democrats and the media now have a lot to answer for and some are “clinging” to the notion President Trump was colluding with Russia.

“So some of them are clinging. And others are pretending like this never even happened,” Benson said.

“The Democratic Party I think has a lot to answer for. But as we've been talking about on the air for the last few days the media I think has been worse and that's where you're seeing a lot of broken hearts over the last couple of days people really grappling with a difficult reality that the president is in fact legitimately elected and not a Russian plant.”