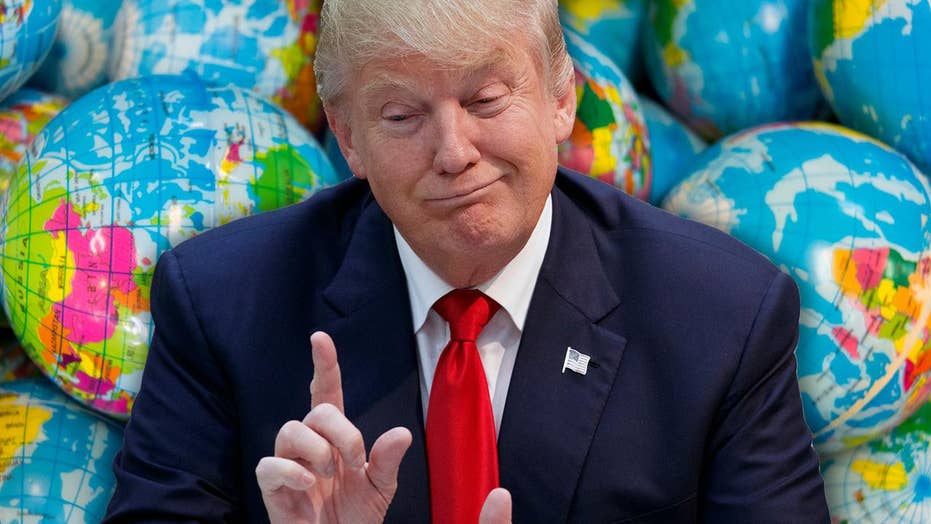 From Brett Kavanaugh's bitter Supreme Court nomination battle to the dire climate change warning, a look at some of the biggest political moments in 2018.

In 2018, President Trump traveled to Singapore for a historic summit with North Korean leader Kim Jong Un, celebrities advocated for criminal justice reform in the Oval Office and Democrats took back the House after years in the political wilderness on Capitol Hill.

And that's just scratching the surface of the year's momentous political events.

Read on for a look at the seven top political moments of 2018.

Brett Kavanaugh’s ascent to the Supreme Court was a rocky one. At first, he seemed to be on a glide path to the high court after an uneventful confirmation hearing. But just before the Senate was set to vote, California psychology professor Christine Blasey Ford’s accusations of sexual misconduct came to light.

In stunning testimony, Ford said Kavanaugh pinned her to a bed during a house party in Maryland in the early 1980s and attempted to remove her clothes and prevented her from screaming.

At the time, Ford said she was 15 and Kavanaugh was 17 and intoxicated. Kavanaugh vehemently denied the allegations when he answered her allegations before the judiciary panel.

Christine Blasey Ford was the only woman who accused Brett Kavanaugh of sexual misconduct to testify before lawmakers. (AP Photo)

Other women also leveled allegations though did not testify. Deborah Ramirez claimed Kavanaugh exposed himself to her while at a Yale University dormitory party in the 1983-84 academic year. Kavanaugh denied that allegation as well.

KAVANAUGH CONFIRMATION DERAILED BY SEXUAL MISCONDUCT ALLEGATIONS: A LIST OF HIS ACCUSERS

Julie Swetnick, represented by attorney Michael Avenatti, said she saw Kavanaugh and a friend “drink excessively and engage in highly inappropriate conduct, including being overly aggressive with girls and not taking ‘No’ for an answer. This conduct included the fondling and grabbing of girls without their consent.”

Kavanaugh also denied her claims and said he didn’t know her. Pointing to inconsistencies in her story, Senate Judiciary Chairman Chuck Grassley referred Avenatti and Swetnick to federal officials for criminal investigation regarding a potential “conspiracy” to provide false statements to Congress and obstruct its investigation into the allegations against Kavanaugh.

Kavanaugh was ultimately confirmed to the Supreme Court in the wake of the second hearing and a supplemental FBI background review.

Trump and North Korean leader Kim Jong Un met in Singapore in June for a historic summit, signing an agreement committing to the “building of a lasting and robust peace regime” on the Korean peninsula.

At the forefront of the summit was the issue of denuclearization. Trump said then that he knew it would take “a long time to pull off complete denuclearization,” but he promised to push North Korea to remove its weapons quickly.

TRUMP ON NORTH KOREA, FROM ‘ROCKET MAN’ TO ‘FIRE AND FURY’

Since the summit, tensions between the two nations have escalated again, however, as denuclearization talks have struggled to progress. After the U.S. announced new sanctions on some of North Korea’s top officials, its Ministry of Foreign Affairs accused the State Department of “blocking the path to denuclearization.”

Ahead of the summit, Trump and Kim often clashed. The president dubbed the North Korean leader “Little Rocket Man,” and Kim in turn called Trump a “dotard.”

House Democratic leader Nancy Pelosi is hoping to get her old job as Speaker back in the new Congress.  (AP Photo/J. Scott Applewhite)

After the 2018 midterm elections, Republicans managed to hold onto the Senate -- but Democrats took back the House.

Democrats gained a total of 40 House seats -- giving them a substantial majority starting next month.

“Today is more than about Democrats and Republicans,” Minority Leader Nancy Pelosi -- who is all but certain to become House speaker again -- said after Democrats regained control. “It’s about restoring the Constitution’s checks and balances to the Trump administration.”

The Democrats’ takeover sets up 2019 to be a year for tough legislative battles between lawmakers and the Republican president. As Democrats control the schedule, GOP efforts to repeal Obama’s health care law or broadly cut taxes aren’t likely to move after January.

Former President George H.W. Bush died on Nov. 30, less than a year after his wife had passed away. (AP Photo/Mark Humphrey)

Bush was remembered with a week of services in both Washington, D.C., and Texas where his politically prominent family and the nation mourned the 41st president. He was remembered for his selfless acts -- from helping a Maine paramedic get into medical school to shaving his head in support of a Secret Service agent’s young son diagnosed with cancer.

Perhaps one of the most touching moments after Bush’s death came as he lied in state in the Capitol Rotunda. Former Senate Majority Leader Bob Dole, a World War II veteran like Bush, was pushed in a wheelchair to the casket. Once at its side, an aide helped Dole stand. As he was steadied, Dole raised his left arm and saluted.

In one of the more touching moments of former President George H.W. Bush's funeral, former Sen. Bob Dole stood up and saluted the casket of the late president. (Photo by Drew Angerer/Getty Images) (Getty Images/Drew Angerer)

HOW GEORGE H.W. BUSH’S FUNERAL COMPARES TO TRADITIONS OF PAST PRESIDENTS’ SERVICES

Bush was taken to his final resting place by a custom train dedicated to the former president more than a decade ago. The light blue Union Pacific train was designed to resemble Air Force One and bears the logo “4141” -- a reference to Bush as the 41st president.

Arizona Sen. John McCain also died in 2018 after suffering from an aggressive brain tumor. McCain was a fixture in American politics, having served in the Senate and Congress combined for nearly four decades.

Cindy McCain, wife of the late Sen. John McCain, R-Ariz., rested her head on his casket during a memorial service at the Arizona Capitol. (AP Photo/Ross D. Franklin)

McCain’s funeral was attended by former Presidents Barack Obama and George W. Bush. Trump did not attend the service at the Washington National Cathedral -- but his presence wasn’t completely absent.

Obama and Meghan McCain, the Republican senator’s daughter, seemingly took swipes at Trump during their eulogies.

“The America of John McCain has no need to be made great again because America was always great,” Meghan McCain said, an apparent reference to Trump’s presidential campaign slogan: “Make America Great Again.”

Obama, on the other hand, derided those in politics who traffic in “bombast and insult and phony controversies and manufactured outrage.”

The other Kim summit

In June, Trump commuted the sentence of Alice Marie Johnson, a great-grandmother serving a life sentence for a nonviolent drug conviction. Kardashian West had advocated on Johnson’s behalf.

A LOOK AT THE PEOPLE KIM KARDASHIAN WEST HAS ADVOCATED FOR

Her husband, outspoken rapper Kanye West, also sat down with Trump at the White House in 2018 to discuss prison reform, unemployment among black Americans and violence in Chicago.

TRUMP AND KANYE WEST’S RELATIONSHIP THROUGH THE YEARS: FROM FRIENDS TO ‘BROTHERS’

Ahead of their lunch, West held a bizarre press conference where he talked about North Korea, his Make America Great Again hat and the 13th Amendment.

At the end of the year, a criminal justice reform bill passed Congress and was signed into law.

Ocasio-Cortez bursts onto the scene

“I cannot put this into words,” said a visibly stunned Alexandria Ocasio-Cortez in June. The then-28-year-old Democratic socialist had just defeated Rep. Joseph Crowley, a 10-term incumbent from Queens and a member of party leadership, in New York’s Democratic primary.

Her shocking win exposed deep divisions within the Democratic party as the liberal wing pressured the establishment to back big-government policies, such as Medicare for all and guaranteed jobs. Ocasio-Cortez, too, supported abolishing the Immigration and Customs Enforcement (ICE) agency, tuition-free public schools, greater gun control and “housing as a human right.”

Her primary win made her an instant political star. Later winning the general election, Ocasio-Cortez will be one of the most closely-watched members of the new Congress.

Ocasio-Cortez wasn’t the only Democratic socialist who had success in the midterms. Rashida Tlaib from Michigan won her congressional seat, making history as one of the first Muslim women elected to Congress.

Even before a jury found Manafort guilty of multiple counts of federal tax and banking crimes in August, Manafort was sent to jail after a judge accused him of witness tampering. He remains in prison.

WHO HAS TRUMP PARDONED SO FAR? A COMPLETE LIST

In September, Manafort pleaded guilty in a separate case involving Special Counsel Robert Mueller, who is investigating potential collusion between Russia and Trump associates in the 2016 election. As part of his plea agreement with Mueller, Manafort agreed to cooperate with prosecutors in their probe. He also forfeited multiple bank accounts and several New York properties.

But 2018 couldn’t end without even more controversy; Mueller’s team accused Manafort of having lied to his office and to the FBI “on a variety of subject matters” since the plea deal. Manafort’s lawyers maintained he “provided truthful information and does not agree with the government’s characterization or that he has breached the agreement.”

Of a presidential pardon for his former campaign aide, Trump has said he “wouldn’t take it off the table.”