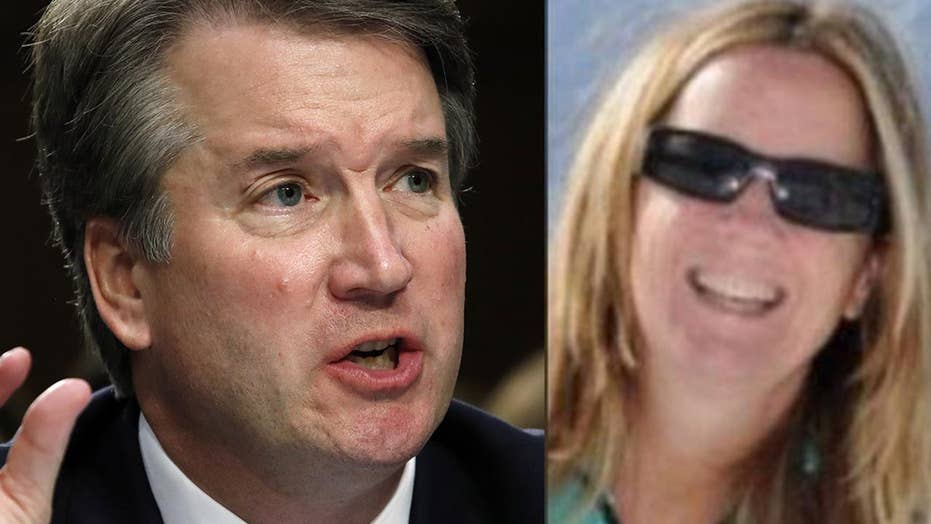 Christine Blasey Ford has publicly accused Donald Trump’s Supreme Court nominee Brett Kavanaugh of sexual assault decades ago. A look at what she is saying and how top lawmakers are responding.

In the midst of his confirmation process, Supreme Court nominee Brett Kavanaugh is facing multiple allegations of sexual misconduct, including an accusation of assault stemming from when he was in high school.

Kavanaugh and the White House have unequivocally denied the allegations, and the federal judge is expected to testify before the Senate Judiciary Committee later this week. One of his accusers, Christine Blasey Ford, has also agreed to testify before lawmakers.

Read on for a look at the women who have accused Kavanaugh of sexual misconduct – and what exactly they have alleged.

Christine Blasey Ford, a California psychology professor, first sent a letter to Sen. Dianne Feinstein, the ranking member of the Judiciary Committee, in July, alleging Kavanaugh attacked her at a house party in the early 1980s.

In the letter, Ford claimed Kavanaugh pinned her to a bed during a party in Maryland, attempted to remove her clothes and put his hand over her mouth to prevent her from screaming. She said he and Mark Judge, Kavanaugh’s friend who was also in the room at the time of the alleged incident, had also turned the music up to a loud volume.

At the time, Ford said she was 15, and Kavanuagh was 17 and allegedly intoxicated. She said she was able to escape when Judge jumped on top of them.

“I thought he might inadvertently kill me,” Ford, now 51 years old, told The Washington Post. “He was trying to attack me and remove my clothing.”

A LOOK AT THE CONFIRMATION PROCESS FOR SUPREME COURT NOMINEES

“I have never done anything like what the accuser describes – to her or anyone,” the federal judge said in a statement.

Aside from Kavanaugh, three people who Ford said was at the party have told lawmakers they were not aware of the incident she alleged. They include: Judge, Patrick "PJ" Smith and Leland Ingham Keyser.

Ford, on the other hand, has submitted declarations from four people, including her husband, who say they can corroborate her accusation.

Ford is expected to testify before the Senate Judiciary Committee Thursday morning, with Kavanaugh appearing after her.

Deborah Ramirez went public with allegations that while in his first year at Yale University, Supreme Court Justice nominee Brett Kavanaugh placed his penis in front of her and caused her to involuntarily touch it during a drunken dormitory party. (Safehouse Progressive Alliance for Nonviolence via AP)

In a second claim of sexual misconduct, Deborah Ramirez told The New Yorker Kavanaugh exposed himself to her while at a Yale University dormitory party during the 1983-84 academic year.

After being contacted by the magazine, Ramirez claimed Kavanaugh exposed himself to her, adding she inadvertently touched his penis while trying to shove him away. However, she also admitted to having gaps in her memory about the party because she had been drinking.

Kavanaugh dismissed the accusation as a “smear, plain and simple” in a statement released by the White House.

“This alleged incident from 35 years ago did not happen,” Kavanaugh said. “The people who knew me then know that this did not happen, and have said so.”

The magazine stated it had not corroborated that Kavanaugh was at the party in question. But an anonymous male classmate said he was told Kavanaugh had exposed himself to Ramirez within the following days.

Still, another male classmate who Ramirez said egged Kavanaugh on during the party has denied any memory of the gathering. In addition, six of Kavanaugh’s classmates – including some who Ramirez said were involved – released a statement doubting the incident happened.

“We can say with confidence that if the incident Debbie alleges ever occurred, we would have seen or heard about it – and we did not,” they said. “The behavior she describes would be completely out of character for Brett.”

White House press secretary Sarah Sanders said "we would be open" to having Ramirez testify before the same Judiciary Committee hearing at which Ford and Kavanaugh are scheduled to appear, but there is no indication GOP Chairman Chuck Grassley is considering that.

The Senate Judiciary Committee is reviewing allegations brought by Julie Swetnick through her attorney, Michael Avenatti, that Brett Kavanaugh engaged in sexual misconduct while at high school parties. (Michael Avenatti via AP)

Attorney Michael Avenatti – who represents adult film star Stormy Daniels in a lawsuit against President Trump – said he is representing a woman who has knowledge of Kavanaugh, Judge and others in high school “targeting women with alcohol/drugs in order to allow a ‘train’ of men to subsequently gang rape them.”

According to a sworn declaration, Julie Swetnick said she met Kavanaugh and Judge in the early 1980s and would often see them at social events.

"On numerous occasions at these parties, I witnessed Mark Judge and Brett Kavanaugh drink excessively and engage in highly inappropriate conduct, including being overly aggressive with girls and not taking 'No' for an answer," Swetnick said. "This conduct included the fondling and grabbing of girls without their consent."

Kavanaugh, specifically, would "engage in abusive and physically aggressive behavior toward girls, including pressing girls against him without their consent, 'grinding' against girls and attempting to remove or shift girls' clothing to expose private body parts," Swetnick alleged. She also said he would make "crude sexual comments" to young women to "demean, humiliate and embarrass them."

She went on to allege that Judge and Kavanaugh would "spike" drinks at house parties with drugs and alcohol "so as to cause girls to lose their inhibitions and their ability to say 'No.'" They would then "target" certain girls, including ones who were alone or shy, and take advantage of them, Swetnick claimed.

She said girls who became inebriated would be "gang raped" by a "train" of boys at the parties, who would line up outside of rooms to wait their "turn."

"These boys included Mark Judge and Brett Kavanaugh," she said.

"This is ridiculous and from the Twilight Zone. I don't know who this is, and this never happened," Kavanaugh said in a statement to Fox News.

Taylor Foy, a spokesperson for Grassley, told Fox News that lawyers for the committee are reviewing Swetnick’s declaration.

Sen. Cory Gardner, R-Colo., received a letter from an anonymous individual alleging Kavanaugh "shoved" someone up against a wall "very aggressively and sexually" during an outing with four witnesses.

Kavanaugh denied the allegations in the letter, which was received on Sept. 22, and told Senate investigators he does not recall socializing with anyone from Colorado in 1998. At the time, he was a key lawyer working for independent counsel Ken Starr.

"We're dealing with an anonymous letter about an anonymous person and an anonymous friend," Kavanaugh said. "It's ridiculous. Total Twilight Zone. And no, I've never done anything like that."

Committee investigators have asked Kavanaugh about a call received by Sen. Sheldon Whitehouse, D-R.I., this week, in which an anonymous constituent claimed in 1985, two "heavily inebriated men" referred to as "Brett and Mark" had sexually assaulted a friend of hers on a boat. The constituent apparently recanted the claim on Twitter ahead of Thursday's hearing.

In response, Kavanuagh categorically denied the claim, saying, "I was not in Newport, haven't been on a boat in Newport. Not with Mark Judge on a boat, nor all those three things combined. This is just completely made up, or at least not me. I don't know what they're referring to."

According to the transcript, the person making the accusation appears to be associated with a Twitter account advocating for the removal of a military coup.