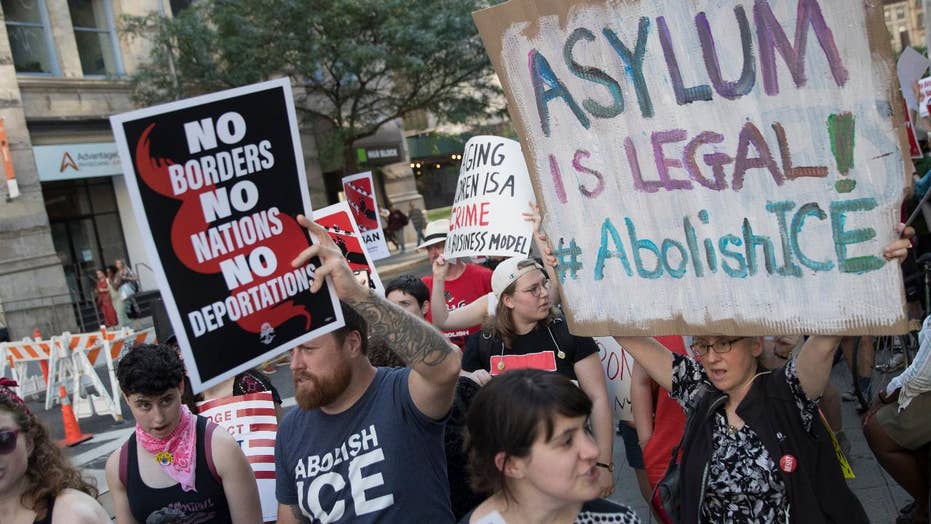 Is abolishing ICE the answer to US immigration woes?

Democrats target agency as debate heats up over hot-button issue.

Some Democrats have joined the call to abolish the U.S. Immigration and Customs Enforcement (ICE) agency – especially under President Trump’s administration.

ICE was created through the establishment of the Department of Homeland Security in wake of the 9/11 terrorist attacks that killed nearly 3,000 people in 2001. According to its website, ICE “was granted a unique combination of civil and criminal authorities to better protect national security and public safety in answer to the tragic events on 9/11.”

Housed within DHS, ICE is in charge of executing hundreds of federal immigration statutes.

As more Democrats push back on the Trump administration’s immigration policies – including the “zero-tolerance” policy for illegal immigrants that resulted in thousands of children being separated from their families until the president signed an executive order –some are seemingly warming up to the idea that ICE should be eradicated or completely redone.

While some Democrats see calling on ICE to end could be a winning way to rally the party’s base in the 2020 presidential primaries, others have waffled on the idea or been unsupportive completely.

Trump suggested that Democrats who continue to push for abolishing ICE will “get beaten so badly” in the 2018 midterm elections in an interview with Fox News.

“You know ICE, these are the guys that go in and take MS-13, and they take them out because they’re much tougher than MS-13, like by a factor of 10,” Trump said. “You get rid of ICE, you’re going to have a country that you’re going to be afraid to walk out of your house.”

From lawmakers to congressional candidates, read on for a look at some Democrats who have begun to call for the abolition of ICE.

Sen. Kirsten Gillibrand, seen as a potential 2020 contender, told CNN in late June that she believes ICE should be abolished. The New York Democrat said ICE has “become a deportation force” and said we “should get rid of it, start over, reimagine it and build something that actually works.”

In a series of tweets, Sen. Bernie Sanders, I-Vt., said “it is time to do what Americans overwhelmingly want: abolish the cruel, dysfunctional immigration system we have today and pass comprehensive immigration reform.”

ICE and other agencies would need to be restructured, Sanders continued.

“Congress must do what the American people want. Let us create a humane and rational immigration system,” Sanders said.

Speaking at a rally in Boston on June 30, Sen. Elizabeth Warren, D-Mass., slammed Trump’s immigration policies, saying he “seems to think that the only way to have immigration rule is to rip parents from their family ... treat rape victims and refugees like terrorists and to put children in cages,” according to Real Clear Politics.

“The president’s deeply immoral actions have made it obvious we need to rebuild our immigration system from top to bottom, starting by replacing ICE with something that reflects our morality and that works,” Warren said.

While comparing ICE to broken phone app or computer program, Rep. Earl Blumenauer said of ICE to “shut it down” in a June 24 blog post. He noted that he voted against the creation of the agency in 2002.

“We should abolish ICE and start over, focusing on our priorities to protect our families and our borders in a humane and thoughtful fashion,” Blumenauer said. “Now is the time for immigration reform that ensures people are treated with compassion and respect. Not only because it is the moral thing to do, but it’s better policy and will cost less.”

“To regain the trust of the American people, it’s time we abolish ICE,” he added.

Rep. Adriano Espaillat, D-N.Y., was one of three lawmakers who introduced legislation that would abolish the federal immigration agency.

“We are pushing to bring an end to ICE as the agency has strayed too far from its original mission, intent and purpose,” Espaillat said in a statement. “In the era of President Trump, ICE has been granted an unlimited range to terrorize Latino communities around the country, regardless of citizenship or status.

“We are witnessing a human rights crisis, and our bill would bring forward a new model and dismantle ICE once and for all,” he said.

The Democrats who brought the bill forth – which included Rep. Mark Pocan of Wisconsin and Pramila Jayapal of Washington – ultimately said they would not vote for it, accusing House Speaker Paul Ryan, a Republican, of creating a “political stunt.”

And in an interview with The Hill, Jayapal said she supports calls “to take a rogue agency and completely get rid of it and start over,” adding that “nobody’s saying, ‘Don’t have the functions that are necessary for the enforcement of immigration laws.’”

“We need to set up a commission that looks at the alternatives to ICE and really starts to understand how do we have these functions in a way that is accountable, transparent and humane,” she said.

“We need to start a fresh conversation. If there are elements that work, we can maintain and strengthen those aspects. Otherwise, we need to thoroughly re-evaluate and re-think immigration enforcement,” he said.

Rep. Mark Pocan, D-Wis., has done more than just call for eradicating ICE; he’s written legislation that would do just that.

“Unfortunately, the president has created this situation where ICE isn’t doing what it was created to do. It’s being used used as his own personal police force, and in those actions it’s actually making us less safe because the critical functions of ICE can no longer happen when the president has them going after people in churches and workplaces,” Pocan told Fox News. “It’s just been made a mess.”

Rep. Nydia Velazquez, who represents New York’s 7th congressional district, said getting rid of ICE would be “an important step.”

“ICE is being used to terrorize immigrant communities and carry out President Trump’s immoral ‘zero-tolerance’ policy,” Velazquez said in a statement. “Moreover, the agency’s almost myopic focus on harassing and targeting immigrants distracts from priorities most Americans actually share – like cracking down on transnational criminals and sex traffickers.”

“At this point, modest reforms at the margins of the agency are insufficient. The time has come to abolish ICE,” she continued.

New York City Mayor Bill de Blasio, a Democrat, echoed Alexandria Ocasio-Cortez – a young congressional candidate who stunned the political world when she beat longtime incumbent Rep. Joe Crawley in New York’s Democratic primary – in calling for the eradication of ICE. He said while every nation needs a “sensible, transparent immigration regulation” agency, ICE is not that for the U.S.

“ICE’s time has come and gone. It is broken,” de Blasio told WNYC in an interview. “ICE has been sent on a very negative, divisive mission, and it cannot function the way it is. So I think that Ms. Ocasio-Cortez is right. We should abolish ICE. We should create something better, something different.”

Even before he became the Democratic gubernatorial nominee in Florida, Andrew Gillum expressed his desire to abolish ICE.

Gillum, the progressive Tallahassee mayor, said he supports “a comprehensive immigration overhaul that includes abolishment of ICE in its current form to be replaced with a more compassionate and focused agency that actually keeps us safer,” the Orlando Sentinel reported.

“Donald Trump has turned ICE into a police and child separation agency – not a border enforcement agency that treats people humanely and compassionately,” Gillum said. “A decision between security or compassionate immigration policy is a false choice; we can have them both, and I promise to fight for that as Governor.”

Gillum faces Republican Rep. Ron DeSantis, who has been endorsed by Trump, in November.

Former “Sex and the City” star Cynthia Nixon, who is challenging New York Gov. Andrew Cuomo in the Democratic gubernatorial primary, has called ICE a “terrorist organization” in calling for it to be dissolved.

“ICE has strayed so far away from its mission. It is supposed to be here to keep Americans safe, but what has turned into, frankly, is a terrorist organization of its own that is terrorizing people who are coming into this country,” Nixon said during an event at a Manhattan church.

Previously, she told “The View” that ICE should be abolished because it has “strayed so far from the interests of the American people and the interests of humanity.” She said it wouldn’t need to be replaced with anything else.

Already in the primary, Nixon has been credited with pushing Cuomo to the left on some issues. Cuomo has said he doesn’t support abolishing ICE but did call them a "bunch of thugs" during a gubernatorial debate.

Bryce accused ICE of having “grown power hungry, sucking up more and more federal resources and directing them towards the deportation of children and families, who are otherwise completely law-abiding,” on his campaign website.

“Accordingly, Randy believes that ICE should be abolished, and Congress should explore which existing agency could best house immigration and customs enforcement, so that only those who pose a true threat to our country’s security face deportation,” his website said.

Abolishing ICE is part of Alexandria Ocasio-Cortez’s platform as she runs for Congress in New York. Ocasio-Cortez, who is only 28, beat the incumbent Rep. Joseph Crowley in New York’s Democratic primary in June.

“As overseen by the Trump administration, ICE operates with virtually no accountability, ripping apart families and holding our friends and neighbors indefinitely in inhumane detention centers scattered across the United States,” Ocasio-Cortez’s campaign website states. “Alex believes that if we are to uphold civic justice, we must abolish ICE and see to it that our undocumented neighbors are treated with the dignity and respect owed to all people, regardless of citizenship status.”

According to the liberal Mother Jones magazine, Ocasio-Cortez was one of the first congressional candidates in 2018 who called for the eradication of ICE.