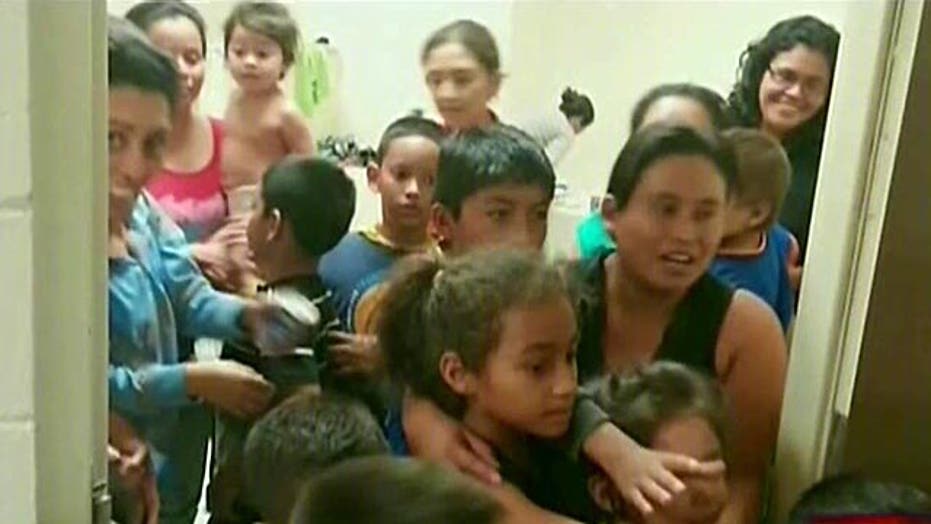 How is U.S. handling massive influx?

Republicans insist they won't agree to the spending without accompanying changes to a 2008 law that gives unaccompanied minors arriving from Central American the right to an immigration hearing, in practice keeping them in this country for years.

But Democratic resistance to such changes hardened, with House Democratic leader Nancy Pelosi changing her stance Wednesday and announcing her opposition to altering the law in a way that would create shortcuts around the immigration court system for Central American youths. Members of the Congressional Hispanic Caucus also took a firm stand against any changes in a meeting with President Barack Obama.

"We made an impassioned plea that the children be protected and that we follow the law," Rep. Luis Gutierrez, D-Ill., said afterward.

The White House has said it wants Congress to give the administration expanded authority to more quickly send back unaccompanied minors from Central American who are crossing the border, but officials have not spelled out what specific provisions they would like.

Rep. Joaquin Castro, D-Texas, said Obama assured the group that the due process rights of the minors would not be compromised, while Gutierrez said Obama does not need a change in law to speed up the immigration process.

"I think within existing law, he can achieve what he needs," Gutierrez said. "Look, I didn't come to Congress to diminish and abolish protections that people have."

The lawmakers also spent time pressing Obama to take executive actions to decrease deportations of immigrants who entered the U.S. illegally but who have been in the country for some time. Obama has said he is reviewing his options and promised to act on his own after House Republican leaders made it clear there would be no vote this year on a comprehensive overhaul of immigration law.

For the moment, the surge of minors across the border has taken precedence over the broader issue of affording legal status to immigrants who are already in the country.

"We can do justice to both situations," Castro said after the meeting with Obama. "It's certainly juggling two balls at once, but we can do that. I come away with hope on both."

Meanwhile, top administration officials including Homeland Security Secretary Jeh Johnson briefed senators behind closed doors Wednesday evening on the border situation and the president's emergency spending request, but appeared to do little to win over skeptical Republicans. That left it unclear as to whether Congress will act to address the crisis in the three weeks remaining before lawmakers leave town for their annual August recess.

The 2008 law in question requires unaccompanied youths under the age of 18 who cross the border illegally to receive an immigration hearing, a process that is heavily backlogged and means that many wait months to years. That provision does not apply to border-crossers from Mexico, however. If captured, unaccompanied Mexican youths can be returned promptly if a Border Patrol official determines that they don't have a claim for asylum or refugee status.

A plan by House Republicans and a bipartisan bill proposed by Texas lawmakers would change the law to allow Central Americans to be treated the same way as Mexicans, a change Johnson told senators he would support, according to lawmakers present. House Republicans are working to pair their policy changes with a much smaller spending bill they hope to bring to a vote as early as next week.

On Tuesday, Pelosi's office said she opposes those changes, a shift from last week when she said that changes to the 2008 law would not be a deal breaker on Obama's request for emergency spending for the border.

Her new stance comes as pressure has mounted from immigration advocates, who say the speedy Border Patrol process used for youths from Mexico ignores the risks they face back home and would send Central American children back to vicious gang violence and worse.

Much of the $3.7 billion in emergency spending Obama is seeking to address the border crisis would be used to increase enforcement at the border and to provide additional facilities to house unaccompanied minors, most coming from Honduras, El Salvador and Guatemala.