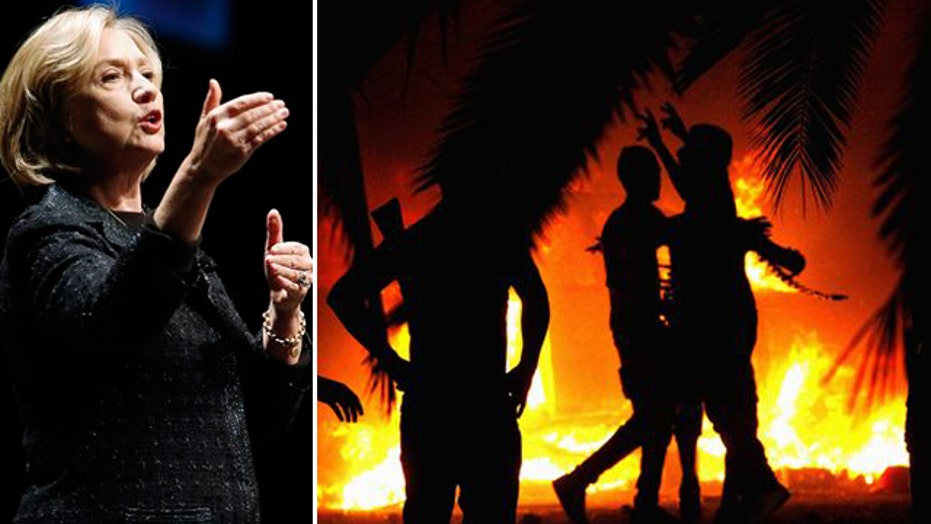 What does the House want to hear from Hillary on Benghazi?

The Washington Times first reported that Rep. Trey Gowdy, R-S.C., chairman of the House committee, told his staff to review the materials. The newspaper previously reported that the audio tapes showed Pentagon officials were so concerned with Clinton's push in 2011 to back Libyan rebels against Muammar Qaddafi that they opened their own back-channels with Qaddafi to try and prevent the U.S. from entering the civil war.

"Chairman Gowdy and the committee are aware of the details reported by The Washington Times, and we are reviewing them as part of the committee's inquiry into Benghazi," Benghazi committee spokesman Jamal Ware said in a statement, confirmed by FoxNews.com.

The decision could open up a new aspect of the Benghazi investigation, which is focused on the 2012 terror attack on the U.S. compound that killed four Americans, at a time when Clinton is moving toward a 2016 White House run. Clinton also may be called in the coming months to testify.

Gowdy said previously he may call Clinton as a witness, and according to the top Democrat on the panel, Clinton already has agreed to do so if she's asked.

Clinton's State Department has been under scrutiny for the level of security at the U.S. compound, and for efforts to initially describe the attack as a demonstration turned violent.

The newly reported tapes deal with the intervention by the U.S. and its allies in 2011.

At the time, Pentagon officials reportedly used an intelligence "liaison" to communicate with Qaddafi's son and a top Libyan leader outside of White House or State Department knowledge. The conversations were secretly recorded. The Times also reported that U.S. intelligence challenged Clinton's claims about a looming genocide in Libya, used to drive the case for U.S. military intervention.

The unnamed intermediary, who was referred to as an intelligence "asset" working for the Pentagon, not only conducted the conversations with Qaddafi's son, but reportedly shared his concern that Clinton was unnecessarily hyping the danger of a potential genocide by the regime as a way to drag Congress into the situation and shift public opinion in favor of an invasion.

"You should see these internal State Department reports that are produced in the State Department that go out to the Congress. They're just full of stupid, stupid facts," the U.S. intermediary reportedly told the Qaddafi regime in 2011. The paper said the liaison was "specifically dispatched by the Joint Chiefs of Staff."

Armed with a United Nations resolution, the U.S. led international bombing raids against the Qaddafi regime in March 2011, eventually aiding the rebels in ousting the longtime dictator, whom they killed.

The Washington Times story suggests that the Obama administration's efforts, led by Clinton, were focused on regime change, not a negotiated settlement, during the lead-up to the war.

The story says that the recordings indicated Clinton allegedly "ordered a general within the Pentagon to refuse to take a call with Qaddafi's son Seif and other high-level members within the regime, to help negotiate the resolution."

The liaison reportedly told a Qaddafi aide that President Obama told lawmakers that Libya "is all Secretary Clinton's matter." The asset also reportedly said the president was not getting "accurate information."