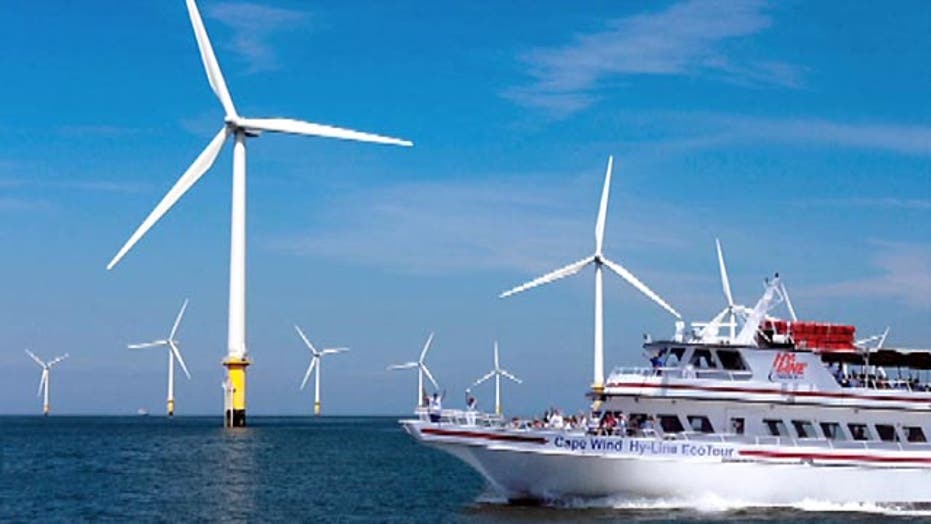 The $2.6 billion Cape Wind project, a private project benefiting from millions in federal subsidies, plans to pioneer offshore wind energy in pursuit of an eco-friendly, sustainable energy supply. Wind turbines typically seen onshore will be installed offshore on the coast of Cape Cod in Nantucket Sound.

But before Cape Wind can be built, a marine terminal first must be constructed to hold the turbines. And the cost of this separate project, funded by taxpayers in Massachusetts, has shot up by $10 million – estimated to cost state taxpayers, so far, $113 million for the terminal alone.

“This ten million is just another crumb that’s being thrown into the black hole of Cape Wind,” said Greg Sullivan, a former inspector general of Massachusetts who now works at the Pioneer Institute in Boston.

While taking turbines offshore allows them to harness more wind power, it comes with a cost. And critics like Sullivan say taxpayers are over-paying for a technology that will supply only a fraction of energy needed at a higher cost.

The over-budget marine terminal is just the latest example, for detractors, of the project’s rising price tag.

“It’s all being paid for by people’s electric bill every month and hundreds of millions of dollars in subsidies. It's just so much money that’s coming from federal tax payers not just in Massachusetts,” Sullivan said. “The estimates for the completion of Cape Wind have more than doubled since it was first proposed.”

The marine terminal project is not solely for Cape Wind. It will be used to hold and assemble the wind turbines but also will serve as a multi-purpose port for heavy machinery.

Mark Rodgers, from Cape Wind, pointed to this dual purpose in disputing that the $10 million increase in the terminal is tied to the project. He noted in an email to Fox News that the terminal is not exclusively built for Cape Wind. Rodgers said the marine terminal could be used by other offshore wind projects that may be built in the future.

Cape Wind backers, though, have to contend not only with taxpayer watchdogs but local communities off Cape Cod – towns that rely on tourism but soon will be home to bulky turbines. Some residents have protested the site.

But George Bachrach, president of the Environmental League of Massachusetts, said the controversy surrounding the project can be chalked up to petty complaints by the 1 percent -- namely billionaire William Koch, a member of the politically active Koch family who has fought the project for years. “They have filed 26 lawsuits, they have lost 26 lawsuits. These have really been obstructionist lawsuits by people that don’t want their views impeded on Nantucket Sound,” he said. “Opposite of what the wealthy folks on Cape Cod think, this will actually attract tourists.”

Despite the controversies, Cape Wind trudges on and utility companies are joining in. Companies, like National Grid, have partnered with Cape Wind to purchase a portion of wind energy from the farm.

Both Sullivan and Bachrach agree that this cost will be passed down to consumers on monthly energy bills, but Bachrach said the cost to consumers is minor. “The price of off-shore wind is higher than natural gas to the utility. But the utility then charging the customer comes to about a buck and a half a month -- the price of a cup of coffee to the average consumer.”

Advocates of offshore wind say it’s time for America to catch up to the rest of the world – touting Denmark’s reliance on off-shore wind for 30 percent of its energy needs. But critics say this thinking is out of date, arguing that offshore wind energy made sense in the early 2000’s when dependence on foreign oil made gas prices skyrocket.

Sullivan says the discovery of natural gas stores on American soil has changed the game -- making offshore wind energy obsolete. “In light of the fact that things have changed in the energy industry, we shouldn’t be going ahead with this. … It’s just more money that’s being poured into an early 1990’s strategy of trying to defend ourselves against oil price hikes from the Middle East.”

The project remains in its developmental stages. Cape Wind representatives say it will take around two-and-a-half years to build the project before any wind energy is produced.