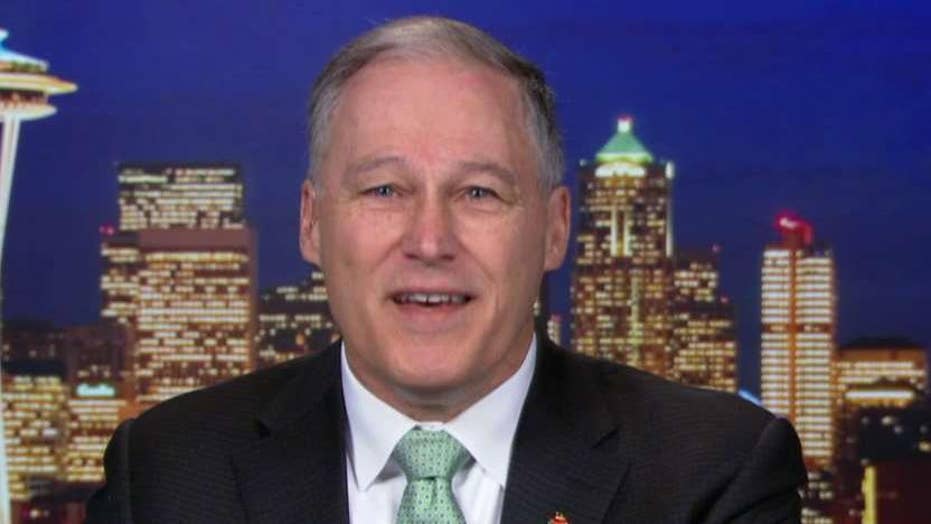 After releasing 12 years of tax returns on his campaign website, Washington governor and 2020 presidential candidate Jay Inslee urged President Donald Trump to do the same.

Inslee became the latest Democratic presidential candidate to release his tax returns, making the announcement on "Fox & Friends" Friday. Inslee said he had released 12 years of his personal tax records on his campaign website and called on the president to “come clean with the American People.”

“He’s got to show what he’s been hiding,” Inslee said. “Americans deserve that truth.”

Trump broke with decades of tradition by not releasing his tax filings during his 2016 campaign. He argued he couldn't release his taxes because he was under an audit by the Internal Revenue Service, but being under audit is no legal bar to a candidate from disclosing taxes.

After his "Fox & Friends" appearance, Inslee tweeted: “Just now, on @realDonaldTrump's favorite show, @foxandfriends, I announced I’m releasing 12 years of tax returns, and called on him to finally be transparent with the American people.”

Inslee announced his Democratic presidential bid earlier this month, which made him the first governor to enter an already-crowded field of senators and other hopefuls battling to challenge President Trump in 2020.

Sen. Kirsten Gillibrand of New York, became the first 2020 presidential candidate to unveil her 2018 returns when she disclosed the documents on Wednesday.

The 2020 hopeful urged her rivals to follow in her footsteps and make their returns public, as Democrats continue to slam Trump for not releasing his returns during his 2016 presidential run.

“Join me in calling on every presidential candidate to disclose their taxes. This is what transparency and accountability is all about,” Gillibrand said in a video.

Sen. Bernie Sanders has promised to release 10 years of his tax returns but hasn’t done so yet. He said he will make the returns public “soon.”

GILLIBRAND THE FIRST 2020 DEMOCRAT TO UNVEIL 2018 TAX RETURNS: SEE WHAT SHE MADE

Another White House contender, Sen. Elizabeth Warren highlighted that she has released the past decade of her tax returns and like Gillibrand, has urged the other candidates to do the same.

On "Fox & Friends" Friday, Inslee also made the case for climate change. It is a topic his campaign is focused on with the goal of building “a national movement to defeat climate change,” according to Inslee's website.

“This is a can-do nation. We put a man on the moon, we defeated fascism and we can use our smarts to build a clean energy economy like we are doing right today and we are doing it all across America,” said Inslee. “We need an inspirational leader, not a pessimistic one in the White House. I think I am ready for that job. This country needs that spark of optimism.”

Inslee made the case for climate change on Fox & Friends Friday, after Trump’s visit to Grand Rapids, MI the day before for a campaign rally where he said, “I love campaigning against the Green New Deal.”

“No more airplanes, no more cows, one car per family, one car, you are going to love that in Michigan,” Trump said at the rally.

The Green New Deal, championed by Rep. Alexandria Ocasio-Cortez, D-N.Y., and Sen. Ed Markey, D-Mass., calls for the U.S. to shift away from fossil fuels such as oil and coal and replace them with renewable sources such as wind and solar power. It also calls for virtual elimination by 2030 of greenhouse gas emissions that have been tied to climate change.

Trump's jabs came days after 42 Democrats and Sen. Bernie Sanders, I-Vt., voted "present" on a non-binding resolution that would have begun debate on the Green New Deal. Not a single senator voted to break the filibuster, while 57 senators -- including three Democrats and Sen. Angus King, I-Maine -- voted "no." In addition to Sanders, five Democratic presidential candidates who have previously backed the Green New Deal voted "present": Kamala Harris of California, Cory Booker of New Jersey, Elizabeth Warren of Massachusetts, Amy Klobuchar of Minnesota and Kirsten Gillibrand of New York.

Democrats described the vote, orchestrated by Senate Majority Leader Mitch McConnell, R-Ky., as a "sham vote" meant to avoid a genuine debate on the effects of climate change.