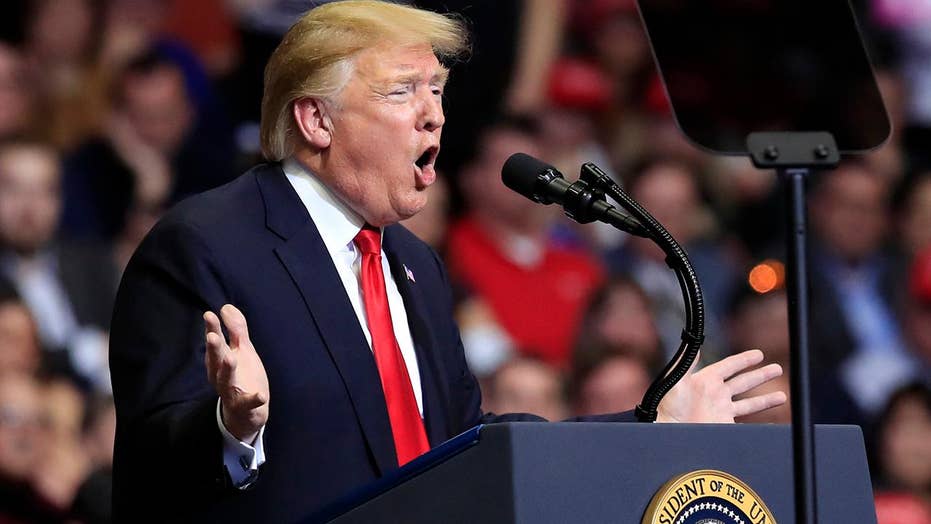 Trump: I love campaigning against the Green New Deal

President Trump addresses the Green New Deal during a MAGA rally in Michigan.

"I'd rather not talk about it tonight, Trump told his audience, "because I don't want to talk them out of it too soon. Because I love campaigning against the Green New Deal. I want them to make that a big part of their platform."

The plan, championed by Rep. Alexandria Ocasio-Cortez, D-N.Y., and Sen. Ed Markey, D-Mass., calls for the U.S. to shift away from fossil fuels such as oil and coal and replace them with renewable sources such as wind and solar power. It also calls for virtual elimination by 2030 of greenhouse gas emissions that have been tied to climate change. Opponents of the plan have seized on background materials briefly published on Ocasio-Cortez's website, which included a promise that the proposal would include guaranteed economic security even for those "unwilling to work" and a line that noted, "We set a goal to get to net-zero, rather than zero emissions, in 10 years because we aren’t sure that we’ll be able to fully get rid of farting cows and airplanes that fast."

Trump's jabs came days after 42 Democrats and Sen. Bernie Sanders, I-Vt., voted "present" on a non-binding resolution that would have begun debate on the Green New Deal. Not a single senator voted to break the filibuster, while 57 senators -- including three Democrats and Sen. Angus King, I-Maine -- voted "no." In addition to Sanders, five Democratic presidential candidates who have previously backed the Green New Deal voted "present": Kamala Harris of California, Cory Booker of New Jersey, Elizabeth Warren of Massachusetts, Amy Klobuchar of Minnesota and Kirsten Gillibrand of New York.

Democrats described the vote, orchestrated by Senate Majority Leader Mitch McConnell, R-Ky., as a "sham vote" meant to avoid a genuine debate on the effects of climate change.