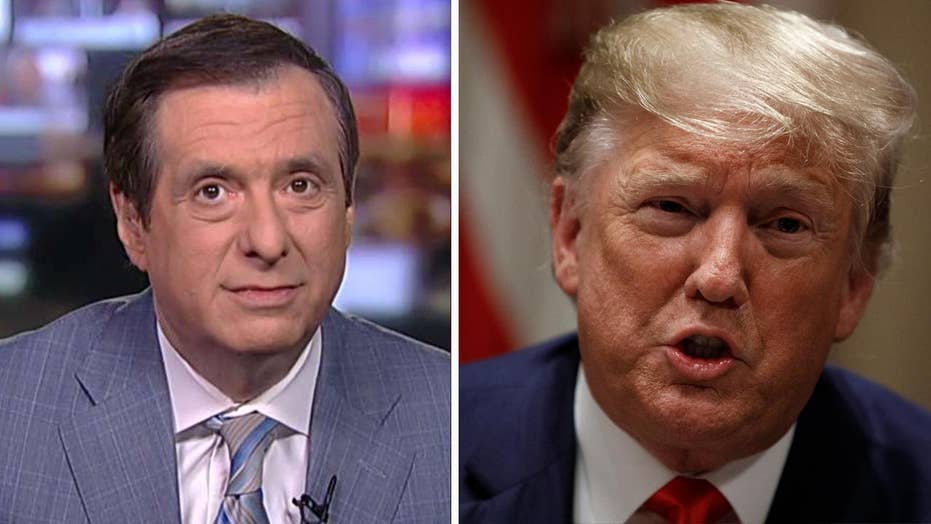 Howard Kurtz: Some Never-Trumpers back president, the holdouts get media contracts

'MediaBuzz' host Howard Kurtz weighs in on the GOP outcry over President Trump's decision to remove U.S. troops from Syria.

When Lindsey Graham, Donald Trump’s best pal in the Senate, is calling in to “Fox & Friends” to say that his Syrian withdrawal is “shortsighted and irresponsible,” the president has a problem.

Graham, who went from Trump’s bitter campaign to golfing buddy, ripped the “impulsive decision” for having “undone all the gains we’ve made” against ISIS.

What’s more, the South Carolina senator, a foreign policy hawk, didn’t get so much as a heads-up from Trump.

“The Syria decision on its face is indefensible,” Fox News contributor Jonah Goldberg told me. “The way he went about it, if the reporting is accurate, is indefensible. Republicans were looking for something they could criticize him on that didn’t amount to aiding and abetting impeachment.”

The widespread criticism from Republicans and some conservative commentators doesn’t automatically mean the president made the wrong call. He ran against endless wars and had obviously grown tired of having U.S. troops stationed in northern Syria. Much of the public may side with him. But in media and political circles the withdrawal is viewed as abandoning our Kurdish allies, who helped turn the tide against ISIS, to a potential massacre by the Turks, who view them as terrorists.

MY HEATED GIULIANI INTERVIEW, AND HIS ALLEGATIONS AGAINST BIDEN FAMILY

It’s Trump’s one-man rule—his own Pentagon was blindsided by the announcement—that sometimes alienates his natural allies.

Most Republicans have stood by the president on Russia, on Ukraine, on impeachment. But the Syria decision drew sharp criticism from Nikki Haley, Marco Rubio, Liz Cheney—even Mitch McConnell.

Trump appeared to backpedal a bit yesterday, saying on Twitter that he’s just shifting 50 troops: “We may be in the process of leaving Syria, but in no way have we Abandoned the Kurds, who are special people and wonderful fighters.”

This followed an eye-popping online threat that “if Turkey does anything that I, in my great and unmatched wisdom, consider to be off limits, I will totally destroy and obliterate the Economy of Turkey (I've done before!)”

Right-leaning journalists have also challenged the president, including Fox’s Kennedy and Brian Kilmeade, and CBN’s Pat Robertson, who said Trump is in danger of losing “the mandate of heaven.”

“The Trump administration is making a serious mistake,” said a National Review editorial, and “Turkey now has an American permission slip to conduct an invasion into Kurdish territory, kill American allies, and carve out a zone of dominance that will further inflame and complicate one of the world’s most dangerous regions.”

National Review famously published an “Against Trump” issue during the campaign with essays from 22 conservatives. Editor Rich Lowry told the New York Times he wished it had never been branded the Never Trump issue. But while NR still publishes some harshly critical pieces, it has moderated its stance toward the president. Lowry “acknowledges that Mr. Trump has helped conservatives like him ‘stress test your assumptions,’ and has forced him to rethink issues like the need to take a tougher approach with China.”

The piece also cites conservative blogger and radio host Erick Erickson, who during the campaign called Trump a “racist” and “fascist” and said he could not vote for him.

But Erickson recently wrote a column headlined “I Support the President,” saying: “It is not easy to support the president. Many of my friends detest him…I have a hard time cheering. There is much to not like. But there is even more to not like on the left.”

Also mentioned is the Blaze’s Glenn Beck, who once called Trump “an immoral man” and now says his failure to win a second term would mean “the end of the country as we know it.”

Steve Hayes, the last editor of the Weekly Standard, watched his magazine’s demise as some readers were alienated by its tough coverage of Trump (who cheered its shutdown). Goldberg, a National Review columnist, has also spoken of how his harsh criticism of the president has hurt his career.

Now Jonah and Steve (also a Fox News contributor) are launching the Dispatch, a website, newsletter and podcast that they say will offer “conservative, fact-based news and commentary that doesn’t come either through the filter of the mainstream media or the increasingly boosterish media on the right.” (More on the new venture below.)

The Times story suggests that some former NeverTrumpers have shifted their stance because it’s more lucrative for them to support and salute the president.

And in a telling sentence, the paper says “their change in attitude helps to mute the much smaller group of conservative voices who remain highly critical of the president and have questioned his conduct.”

So: If anti-Trump conservatives are a “much smaller group,” how come they dominate at major media outlets? The Times’ own op-ed page, as well as that of the Washington Post, feature conservative columnists who despise Trump. MSNBC has conservative hosts who pound the president day after day. CNN, for various reasons, has dropped several pro-Trump conservative contributors.

Could there be a reason that these news organizations mainly feature conservatives with a harsh view of the Trump presidency?

The Dispatch, which goes live Wednesday, is described by Jonah Goldberg as neither “pro-Trump” or “anti-Trump,” but “post-Trump.”

“We think there’s not a lot of reporting on the right,” Goldberg told me in describing the web/newsletter/podcast venture with Steve Hayes. “They just aim all their fire leftward…A lot of what passes for reporting on the right is really de facto opposition research, going after Democrats.”

Goldberg says they envision their media venture in the mold of the New Republic in the 1980s and ’90s, a lefty magazine that included such right-leaning voices as Fred Barnes and Charles Krauthammer. “Everyone knew they were liberal, but they weren’t afraid to call BS on Democrats.”

The founders are gambling on a business model in which the website will carry no ads. Instead, after a period of offering free content, they are hoping to reap revenue from members who sign up because they want conservative reporting and writing that doesn’t necessarily cheerlead for Trump.

“So much of what’s on the web now, left and right, is geared toward clickbait, making people angry,” Goldberg says, “and we think a lot of people are sick of it.”