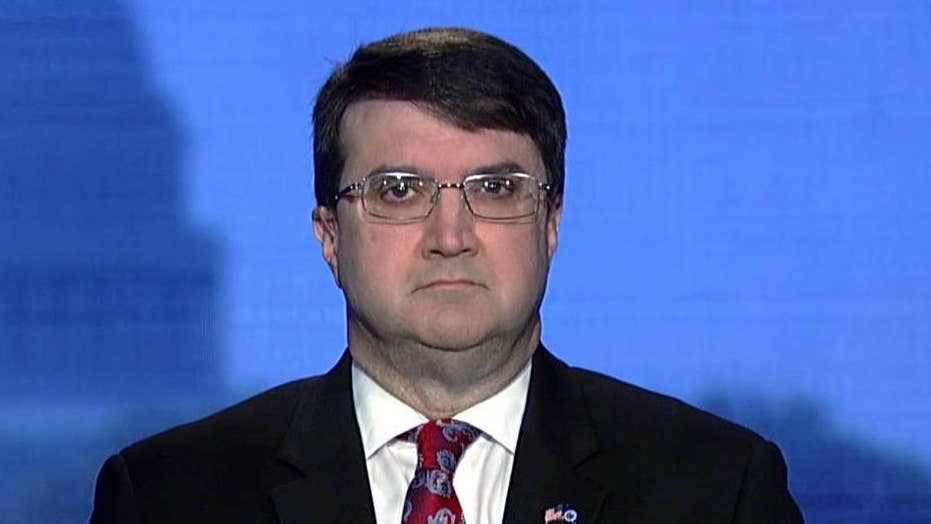 Twenty-two American veterans are said to die by suicide every day, and the Department of Veterans Affairs is taking a step to fight that sobering statistic at the request of President Trump.

The president on Wednesday said he instructed the VA to place a substantial order of Spravato, which is used to help treat depression in patients who might not have seen results from other treatments or drugs, although some medical experts have said the drug's effectiveness is not entirely clear.

Spravato would be part of a new combination of drugs administered in spray form, VA Secretary Robert Wilkie told Fox News on Thursday morning, noting that the VA has prescribed Spravato for years “but in intravenous form and under the supervision of anesthesiologists.”

“What we’re doing now is transitioning to the nasal spray,” Wilkie said on “America’s Newsroom.” “It’s still under the supervision of anesthesiologists at [the] VA, but FDA has approved the combination of several drugs and Spravato [as] a means to combat depression.”

“We are doing everything we can to address the issues involving depression and mental health. I’ve said many times that we’ve not even had that national conversation about mental health that we desperately need,” Wilkie stressed, pointing also to addiction and homelessness.

“It’s in its opening stages when it comes to that combination of drugs the FDA has approved for us, to see if we can make a dent in depression,” Wilkie told Fox News’ Jon Scott and Sandra Smith.

On Wednesday, before departing for the American Veterans (AMVETS) national convention in Kentucky, President Trump told reporters he had instructed the VA to buy “a lot” of Spravato.

“There’s a product that’s made right now that just came out by Johnson & Johnson which has a tremendously positive, pretty short-term, but nevertheless a positive effect,” Trump said, McClatchy reported. “I’ve instructed the head of the VA to go out and buy a lot of it, and we are buying a lot of it.”

At the AMVETS convention, Trump said there’s been no issue more urgent than the veteran suicide crisis.

“My administration is determined to do everything in our power to save the lives of our heroes,” Trump said.

The president said earlier at the White House that he hopes the VA is “getting [the medication] at a very good cost” from Johnson & Johnson.

One dose of Spravato is $295, according to McClatchy; a patient’s total daily cost could be more than $700 if they need two and a half sprays, which is common. Since the Food and Drug Administration has approved the treatment for the VA, Medicare and Medicaid would cover 65 percent of each dose, McClatchy noted.

Wilkie told Fox News on Thursday that a veteran can be given the Spravato nasal spray if his or her doctor and team approve its use.

Trump on Wednesday also signed an executive order that forgives all student loan debt for any permanently disabled military veterans.