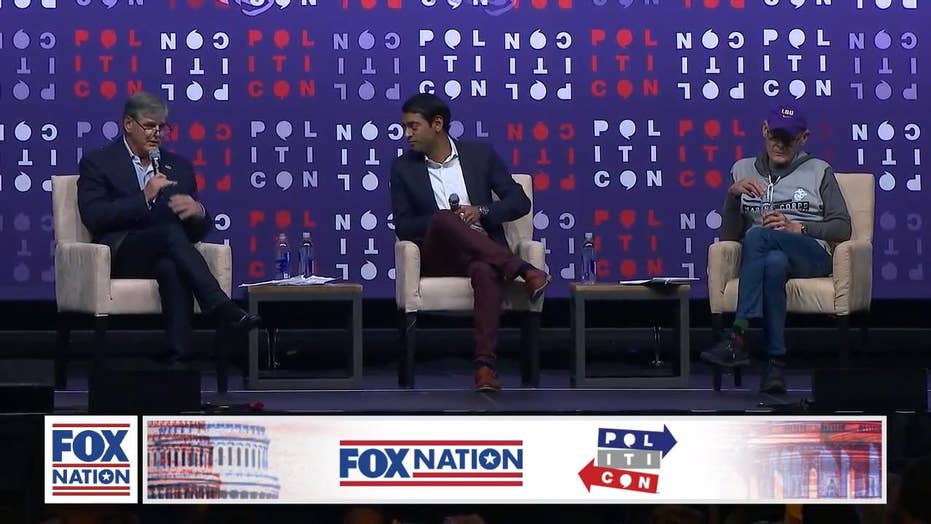 Fox News host Sean Hannity and James Carville, who was Bill Clinton's presidential campaign manager, had a heated debate over the future of the Trump presidency during Politicon in Nashville, Tenn., on Saturday.

"What's going to happen is they're going to impeach him... That train has totally left the station," said Carville of the House Democrats, adding that the Trump administration is totally unprepared for what lies ahead.

NEW DOCUMENTARY ON THE FIRST PRESIDENT TO BE IMPEACHED

Recalling the 1998 impeachment of Bill Clinton, Carville provided insight into how his former boss' team set out to deal with it.

"We actually had a strategy -- you know -- we started with 71 percent approval," said the veteran Democratic strategist. "They start with 41 percent approval. So they're in a little bit of a deeper hole.

"Our strategy was to portray the prosecutor as a prissy, partisan, pompous prosecutor," Carville continued. "Of course, he played right into it and I had more fun slapping Ken Starr around than almost anything I've ever done in my life. The second thing we did is we trivialized the charge -- 'You're looking to do this over that? Come on, guys?'  And a third thing we did is we kept the base intact. The only thing that I see them doing is keeping their base intact. Well, their base alone is not going to win for them."

HANNITY: REPORTS ON ALLEGED FISA ABUSE AND ORIGINS OF RUSSIA PROBE WILL 'SHOCK THE CONSCIENCE AND SOUL OF THE NATION'

Hannity conceded that Carville and his team devised a successful plan to blunt the 1998 efforts of the House Republicans and then-Speaker of the House Newt Gingrich.  However, Hannity argued that Democrats have made the mistake of pursuing an inherently unfair process that the American public will not accept.

"James Carville went to war for Bill Clinton and they were very effective at fighting back. But I'll tell you this," said Hannity. "Newt Gingrich allowed the full vote... in the House of Representatives for a real inquiry. Newt Gingrich also let the full House vote on the scope and the rules and the procedures.

Carville doubled down on his view.

"I'm just saying, here's somebody who's seen this before," Carville said. "Let me tell you. Trouble is coming. They will not lose three Democrats on an impeachment vote."

In the end, Hannity said he believes that President Trump will come out on top.

COULD PELOSI ABANDON IMPEACHMENT? LEGAL ANALYST PREDICTS SHE MAY

"If this is their process, that they can't allow hearings for the American people to see and they think they're going to impeach him behind closed doors," said Hannity. "That sounds to me more like the former Soviet Union or Venezuela or Cuba.  That is not due process [and] that makes this whole thing illegitimate, unconstitutional.

"The American people, whether you're Democrat or Republican, you should agree that every American, including Donald J. Trump, the president, the United States, has the right to due process. And if they want to do this behind closed doors, the American people will see the fundamental unfairness of this," he concluded.

For the full debate between Sean Hannity and James Carville at Politicon, as well as all the highlights from the event, visit Fox Nation and sign up today.