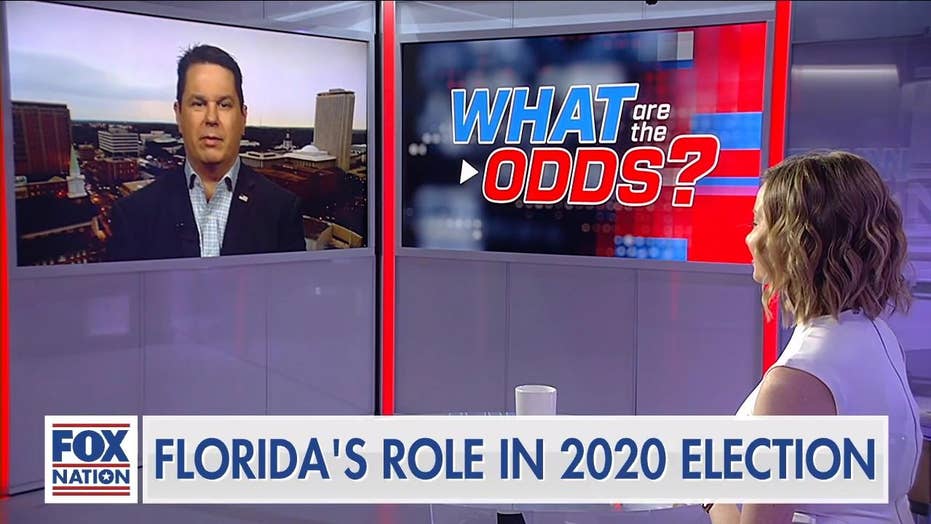 Former senior Obama adviser: Florida's vote in 2020 will look a lot like vote in 2016

The man who helped lead President Barack Obama to victory in Florida in 2008 said he expects the next presidential election in the Sunshine State will look a lot like the 2016 race -- when President Donald Trump defeated Hillary Clinton by about 1 percentage point.

"If you just look at the last five statewide elections -- the last two presidential and the last three governors' races -- all decided by one point. So I've got a feeling that Florida in 2020 is going be the same," former senior adviser to President Obama, Steve Schale, told Fox Nation's Kristen Soltis Anderson on her new show, "What Are The Odds?"

In the 2016 presidential election, Trump bested Clinton by 1.2 percentage points in Florida. In 2012, the state went for Obama by a similar margin.

UNUSUAL BETS THAT POLITICAL GAMBLERS ARE MAKING IN 2020

"Tell me what you think was responsible for Trump being able to flip Florida blue to red?" asked Soltis Anderson.

"What's interesting is that the Clinton election and the Obama election were about the same," said Schale. "What really happened were those swing voters that live in those counties around the I-4 corridor went really hard for Trump."

The region of central Florida, known as the I-4 corridor, stretches from the Tampa Bay area on the west coast through Orlando to Daytona Beach on the east coast.

He noted that many of the people moving to that part of Florida are from states that also went for Trump in 2016.

"Florida tends to be reflective of the places where people come from," he said. "And if you look at the communities where Trump did really well, a lot of those folks moved from places like Wisconsin and Ohio and Michigan and Pennsylvania and such. And so I think those same kind of places that are going to be competitive in the 2020 election are going to make Florida competitive as well."

Political pundits and commentators have long predicted that changing demographics in the I-4 corridor would decisively tip Florida's electorate in the direction of Democrats -- leading some to predict that a 'blue wave' was set to hit the state.

In the summer of 2018, roughly 200,000 Puerto Ricans fled their island for Florida after the Category 4 storm hit the U.S. territory last September -- and a large number of them settled in the I-4 corridor.

"The blue wave might finally be showing up in Florida," said NBC news anchor Chuck Todd on his MSNBC show in September 2018, in the run-up to the Midterm elections. "66 of the 67 are in - the blue wave continues to grow," said a CNN anchor during their election coverage in November 2018.

But largely, the so-called 'blue wave' never materialized in Florida in 2018.

"It felt like Florida... was a little more resistant to the blue wave than some other places. Do you agree with that assessment?" asked Soltis Anderson.

"Absolutely, I do," agreed Schale. "There's been so much money and so much effort spent in the state organizing around presidential elections the last few cycles. And I think the state has just become very stable."

"What's interesting is when you see trends that happened from a population standpoint that you think would benefit Democrats, things like Puerto Ricans moving into central Florida, the changing demographics in Dade [county], they get balanced out by other things. For example, Midwestern retirees moving into places like The Villages, so Florida kind of maintains a sort of equilibrium."

"Whether Trump does well or not in 2020 nationally," concluded Schale. "I feel pretty confident saying that if you put a bet on Florida that it's going to be inside two points -- you would be pretty safe to win that bet."