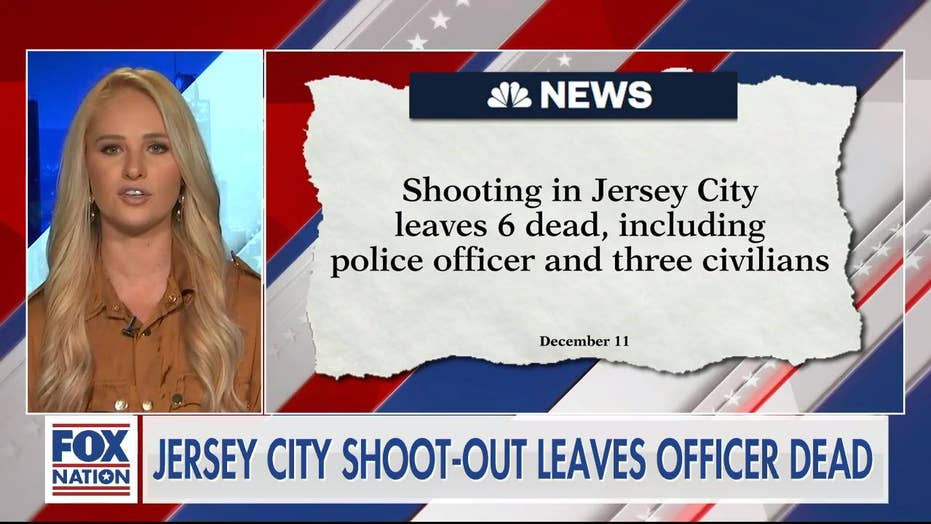 ‘They take the risk so we can come home to our families’: Lahren praises police after deadly Jersey City shootout

Fox Nation host Tomi Lahren issued strong praise for law enforcement in a tribute to a New Jersey police detective who was among the six killed in Tuesday's deadly Jersey City shooting.

Joseph Seals, a 39-year-old police detective in Jersey City, N.J., was among the six people killed, including two suspects, during an hours-long gun battle that began at the Bay View Cemetery and made its way to the Jewish JC Kosher Supermarket.

Seals, a 15-year veteran of the force and father of five, was part of the department's push to get guns off Jersey City's streets. He was on duty and in plainclothes when he was fatally shot twice, in the head and upper arm. He was later pronounced dead at the hospital.

"Seals, like all of our law enforcement and first responders from coast to coast and everywhere in between, put his life on the line for his community and paid the ultimate sacrifice," Lahren said.

“He [probably] is responsible for more guns being removed from the streets than any,” Fulop tweeted. “He was an officer that loved JC, was involved in the city, and one that everyone knew regardless of their precinct.”

Seal's mother, Deborah Perruzza, was at home during the time of the shooting, she told Fox News. When she saw it was in her son's district, she said she texted him to see if he had heard about the events unfolding.

"I texted him, 'Joe, are you alive? You OK?' I never heard back from him," she said. "I called his wife but she hadn't heard anything."

"I kept thinking, it's not even real," Perruzza said. "I just kept watching the news and I would see his picture and I was just saying to myself, 'Why him? Why him?'"

Offering condolences to Seal's family, Lahren dedicated the Fox Nation episode to law enforcement across the country, and the sacrifices they make daily to protect their communities.

"Many in this country don’t appreciate the work our officers do every single day," she said. "Every time they put on that badge and uniform they know there is a chance they won’t come home to their families at night. They do the job and take that risk so that we can come home to ours ... they are selfless and they are heroes."

"People often ask me why I support law enforcement to the extent I do and why I don’t rail on the so-called 'bad apples' in the police force," Lahren continued. "Well, let me tell ya, for every 'bad apple' there are a thousand officers like Detective Seals willing to die for me, for you, and for their community -- even those who proclaim to hate police. Anyone who is willing to do all that for such little in return sounds like a pretty exceptional human being to me."

"To the Jersey City Police Department, the community, and the family and friends lucky enough to have known Detective Seals," she concluded, "I offer my sincerest condolences and prayers."

Senior law enforcement officials briefed on the investigation have told various media outlets that the Jewish market was specifically targeted after investigators located anti-Semitic and anti-police postings published by one of the suspects online. Officials identified the bystanders killed at the market as Mindy Ferencz, 31; Miguel Douglas, 49; and Moshe Deutsch, 24.