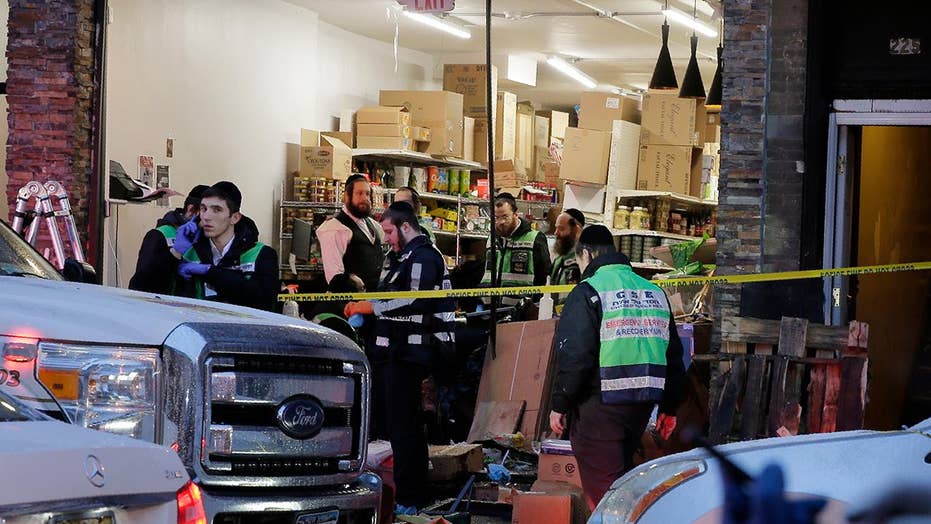 The shooting that unfolded at a kosher market in Jersey City, N.J., was a "targeted" attack, according to officials who say at least one of the suspects had published anti-Semitic and anti-police posts online before opening fire Tuesday.

Mayor Steven Fulop would not commit on Wednesday to calling the shooting an anti-Semitic attack, but said after reviewing surveillance footage, investigators believe the attack was plotted against the Jewish deli, located just across the Hudson River from New York City. Six people were killed in total - four victims, including a police officer, and the two suspects.

"At the time of the incident yesterday, it was difficult to understand intent and there's still a lot of questions around that, but after reviewing the CCTV cameras on the Jersey City side, we do feel comfortable that it was a targeted attack on the Jewish kosher deli across the street here," Fulop said from outside the market.

Bernie Kerik on NJ Shooting: We lost a 'phenomenal cop'

The mayor said of the footage: "We can see the van moving through Jersey City streets slowly, the perpetrator stopped in front of there, calmly opened the door with two long rifles, him and the other perpetrator, and began firing from the street into the facility."

No law enforcement officials have publicly said the suspects targeted Jews or police, but a source told The New York Times one of the suspects published anti-Semitic and anti-police sentiments online, leading authorities to believe it was a motive.

Fulop, however, said, "I didn't use the word anti-Semitic. Anything else is open for investigation." 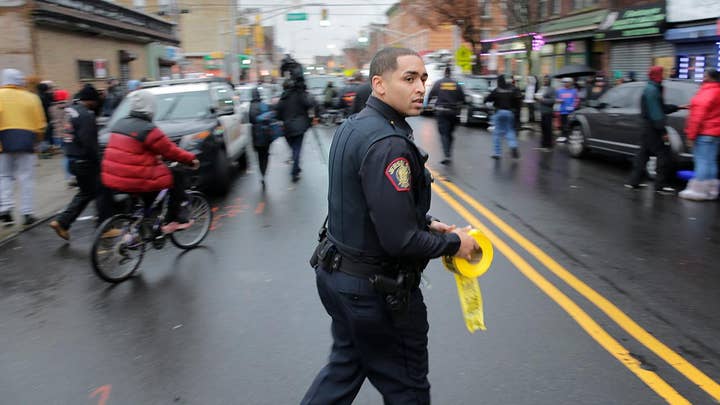 New York City Mayor Bill de Blasio identified the victims Wednesday as Moshe Deutsch, the 24-year-old son of a well-known community leader in Williamsburg, Brooklyn, and Mindel Ferencz. He said they were "brutally murdered in this attack."

"What we saw yesterday was a premeditated, violent, anti-Semitic hate crime," de Blasio said. "In other words, you can say it was an act of terror."

Chris Christie, the former governor of New Jersey, later told ABC's "The View": "It's a really terrible thing and we need to pray for this detective's family. Those five children lost their dad."

He added: "It's an awful divisive time when you're allowing folks to be able to express these kinds of views no matter how they are, no matter what the ethnic, religious bias they have. That's got no place in this country. It never has, and we, all of us who feel that way, need to continue to be speaking out against it and drown their voices out."

The two suspects were killed in the shootout with police. The male suspect, according to NBC New York, was a follower of the Black Hebrew Israelite movement and kept religious writings in the rented U-Haul used to drive to the market on Tuesday.

Sources said "anti-police and anti-Jewish writings" were found on one of Anderson's social media profiles, and said investigators are trying to determine if he published the material himself.

The shooting started near Bayview Cemetery, where Det. Joseph Seals, a 40-year-old officer with the Jersey City Police Department, was fatally shot. The gunmen then drove their rental van to the kosher market, where the hours-long shootout unfolded.

Two police officers who were roughly a block away from the market immediately responded when they heard the initial gunfire, Fulop said, telling reporters that "had they not responded and had they not been there in that location, more than likely more people would have died."

“There were multiple other people on the street so there were many other targets available to them that they bypassed to attack that place, so it was clearly that was their target and they intended to harm people inside,” the mayor said.

The kosher grocery is a central fixture in a growing community of Orthodox Jews who have been moving to Jersey City, which has about 270,000 residents, in recent years.