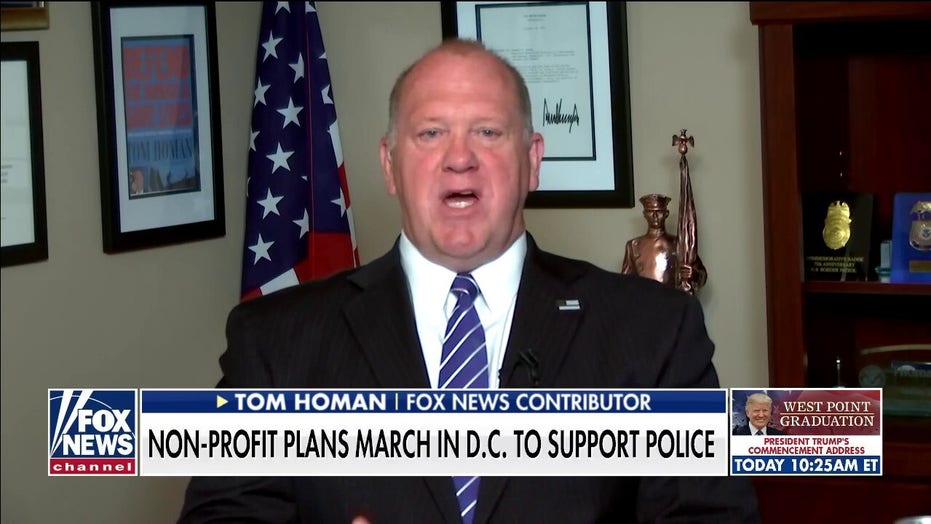 Tom Homan on the non-profit march to support law enforcement in Washington D.C.

It's a "sad day in America" when people participating in a march to support police have to worry about being assaulted or called a racist, former Acting ICE Director Tom Homan said Saturday.

Homan, appearing on "Fox & Friends Weekend," said that's part of why he strongly supports Saturday's We Back Blue March in Washington, D.C.

A video promoting the march notes there are "900,000 officers in the USA to protect 325 million people," and also pays tribute to retired St. Louis police Capt. David Dorn, who was shot and killed by a looter during protests against police brutality.

"I'm going to go up there, and I’m going to march with this group. I'm also going to speak. I was asked to do that, and I'm going to do it because I want to speak for the men and women of this nation that support police but are afraid to say so," Homan said.

The former police officer said he believes the nationwide unrest and continuing Black Lives Matter demonstrations sparked by the death of George Floyd in Minneapolis may scare off some people who would like to show their support for police.

"It's a sad day in America, when an American taxpayer cannot support our men and women in law enforcement without fear of violence. ... And it's a sad day when people that want to go show their support for law enforcement are afraid to do so out of fear they may be attacked and may be called racist."

Fairfield police officers kneel during a "Taking a knee for Justice and Prayer" service on Wednesday, June 3, 2020, in Fairfield, Calif. Demonstrations have taken place across the United States in protest of police brutality, sparked by the May 25 death of George Floyd in police custody in Minneapolis. (AP Photo/Ben Margot)

"There is no reason we can't denounce racism – it’s a terrible thing. Denounce racism, but at the same time defend the men and women who defend this nation and our communities, and protect us every single day across this country," Homan said.

According to The Washington Post, police have fatally shot or killed roughly 1,000 U.S. citizens since the Ferguson, Mo., riots of 2014, sparked when Michael Brown was fatally shot by an officer.