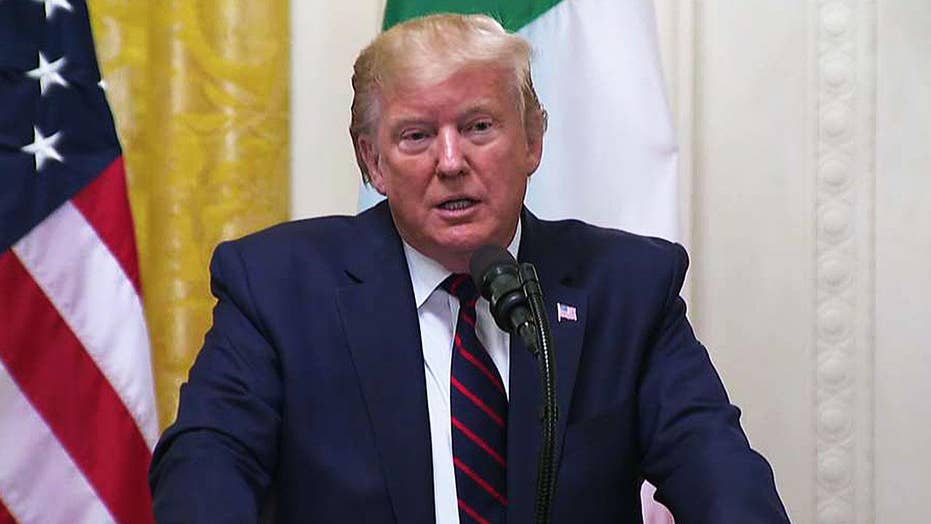 Trump says Turkish President Erdogan had been building up troops on the border with Syria for a long time.

"This is among the most dishonest, craven statements ever from Trump — to justify his total sell-out to ISIS, Putin, Assad and Erdogan," Rice tweeted. "We need to find out WHY? What did Trump get in exchange for sacrificing our national security???" she asked on Wednesday.

Trump, during a Wednesday press conference, had said that Kurdish allies who'd aided the U.S. in battling ISIS weren't "angels."

“The PKK, which is a part of the Kurds, as you know, is probably worse at terror and more of a terrorist threat in many ways than ISIS," he said, referring to the Kurdistan Workers' Party.

Trump has received bipartisan criticism for his decision to pull U.S. troops out of northeastern Syria, with critics alleging he abandoned the Kurds to "slaughter" by Turkey, which has used the withdrawal as an opportunity to push into the region.

SUSAN RICE CLAIMS TRUMP HUGGED HER, TOLD HER SHE WAS 'TREATED UNFAIRLY' IN BENGHAZI DEBACLE DURING 2015 MEETING

Rice previously took on Trump's decision during a "View" appearance in October. That decision, Rice argued, sent a bad message to allies and created the prospect that Kurds wouldn't be able to continue detaining ISIS terrorists.

"They have no choice but to fight and defend themselves," Rice said of Kurdish forces. "Those prisoners are either going to be released or escape. That's more than 10,000 fighters that can threaten us in the region," she said.

Trump, on Wednesday, defended himself by suggesting Syria and Turkey should deal with their own problems. He suggested he is protecting American soldiers.

On Monday, Trump also tweeted that he would rather focus his efforts on protecting the southern border of the U.S. from illegal immigration than protecting Syrian space.

"I would much rather focus on our Southern Border which abuts and is part of the United States of America. And by the way, numbers are way down and the WALL is being built!" he said.