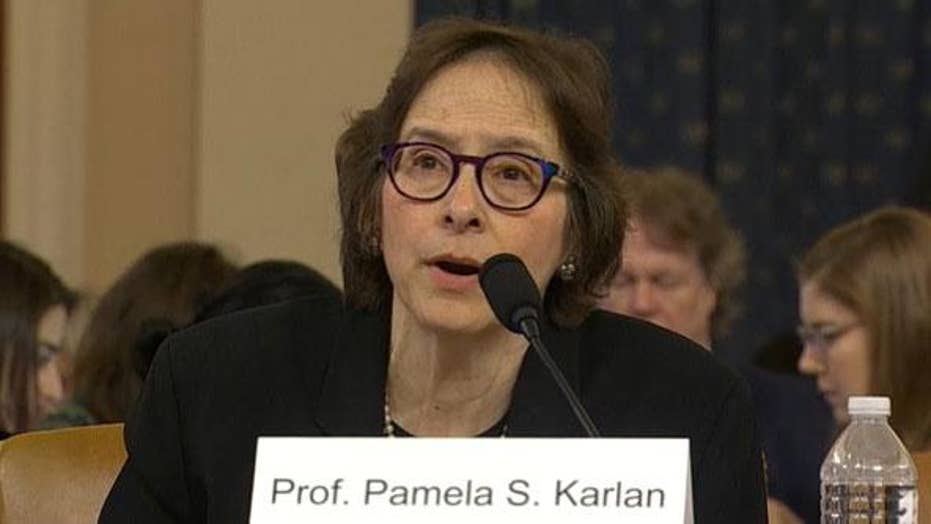 Prof Karlan: Our national interest for Ukraine to fight Russians there so we don't fight here

I didn’t expect much from the House Judiciary hearing, and I wasn’t disappointed.

Democrats have already decided to impeach Donald Trump, and stacked the witness table with three professors who passionately insisted that the House has no choice. Only one professor said impeachment was absolutely not warranted.

These are smart and learned academics, but the deck was obviously stacked.

Chairman Jerry Nadler declared that “never before in the history of the republic” has “the president engaged in a course of conduct that included all of the acts that most concerned the Framers.” The New York Democrat added that Trump’s “level of obstruction is without precedent.”

“This is not an impeachment. This is just a simple railroad job…You just don’t like the guy,” the Georgia Republican said.

And his party forced roll-call votes on such matters as postponing the hearing and forcing Adam Schiff and the whistleblower to testify, just to shake things up and make a point.

Whether or not you buy the president’s case that impeachment is a “hoax” and a “witch hunt”—a “dirty word,” Trump said from NATO in London--no one can deny that the process has been bathed in partisanship.

Democrats served notice they were firmly in charge by leaking, to Politico, Nadler’s private assurance to his colleagues that “I’m not going to take any s---.”

Any faint hope that the four professors would be appearing just as expert fact-finders was quickly dashed.

Michael Gerhardt of the University of North Carolina said that Trump’s abuses of power “are worse than the misconduct of any prior president.”

Pamela Karlan of Stanford said that “if we are to keep faith with the Constitution and our Republic, President Trump must be held to account.”

She got into it with Collins, who said the witnesses couldn’t have digested the Intel Committee’s report on impeachment, declaring: “I’m insulted by the suggestion that as a law professor I don’t care about those facts.”

It quickly emerged that Karlan had recently donated a thousand bucks to Elizabeth Warren.

Jonathan Turley of George Washington University, the only critical witness, said Democrats were using “the shortest proceeding, with the thinnest evidentiary record, and the narrowest grounds ever used to impeach a president.”

Turley made a point of saying he didn’t support Trump politically and had voted against him in 2016. But he said he is mad about this impeachment, as are his wife, his kids and his dogs. He got so much airtime that at times it seemed like the Turley Show.

But critics will note that Turley told the very same committee in 1998 that he supported Bill Clinton’s impeachment.

This was a check-the-box hearing, following the GOP’s example two decades ago, a bow in the direction of debating the standards for impeaching a chief executive. But relentless partisanship carried the day.

At one point, GOP congressman Steve Chabot quoted Nadler saying that impeachment would unnecessarily divide the country—back when Clinton was facing removal from office over the Monica Lewinsky debacle.

The public is growing tired of the process, and support for impeachment and removal seems stuck at 50 percent. Wednesday's hearing added to the sense that House Democrats know full well what they want to do—and are determined to do it before Christmas.

By the same token, Senate Republicans know what they want to do and will acquit Trump in January, unless it drags on into February.

That’s why the Judiciary hearing felt like an empty exercise that didn’t move the needle and isn’t destined to be a ratings smash.