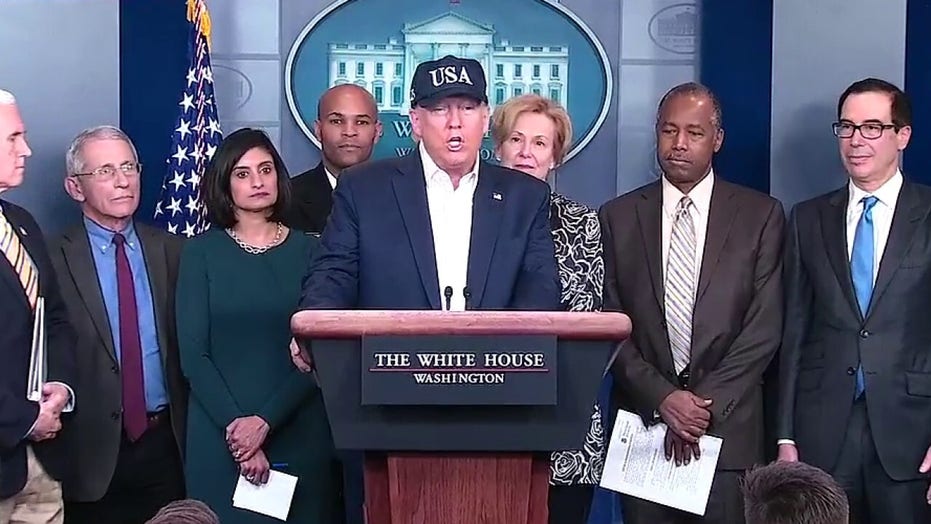 President Donald Trump and coronavirus task force team give updates on the disease in a White House briefing.

Slate Magazine published an op-ed on Friday in which one of its staff writers argued that President Trump's "masculine bluster" was responsible for him rejecting "common-public health recommendations" for dealing with the coronavirus.

"There is a recognizable vein of masculine bravado running through this stubborn rejection of common-sense public health recommendations meant to keep Trump, [Vice President] Pence, and their colleagues -- but also the public -- safe," writer Christina Cauterucci said.

Cauterucci's piece -- titled "The Masculine Bluster of Trump’s Coronavirus Hand-Shaking Tour" -- concluded by accusing Trump of "the ultimate use of macho performance for self-advancement at the expense of public safety and well-being."

It specifically took issue with Trump and Pence's refusal to stop shaking people's hands amid the outbreak.

Cauterucci appeared to try and psychoanalyze the two highest-ranking officials in U.S. government, citing their alleged aversion to anything non-masculine.

"Taking health precautions like limiting physical contact requires a tacit admission of vulnerability -- a public recognition of the specter of one’s own physical frailty," she wrote.

"To Trump and Pence, charging boldly into a field of hands of dubious provenance and hygiene is a macho show of supposed courage. Leave the fear of respiratory failure to the beta males -- if someone wants a handshake from the president, and that someone isn’t literally Nancy Pelosi, he’ll get one."

Cauterucci appeared to get support from others, such as feminist writer Jessica Valenti, on Twitter.

Cauterucci then delved into a thorough analysis of handshakes in American culture.

"Handshakes have long served as vehicles for performances of male virility. In classical kernels of business lore, a firm shake demonstrates trustworthiness and vigor; a limp one is weak or suspect," she said. Trump, she claimed, was willing to "trigger" liberals with handshakes because he was overconfident in his own strength.

Trump's attitude, she argued, was the kind that prevented men in general from making health care visits. And Trump's masculinity was also partially to blame for his attempt to keep financial markets stable by allegedly downplaying the pandemic.

"Historically, masculine bluster has helped artificially inflate markets, masked the consequences of undue risks, and justified reckless, temporarily self-enriching financial behavior that has ravaged the social and economic stability of societies around the world," she added (links are the author's).

As she noted, Trump shook the hands of CEOs during a news conference on Friday. He also shook people's hands in Florida on Monday.  "I love the people of this country, and you can't be a politician and not shake hands," Trump reportedly said.

As of Saturday, the White House began testing everyone, including members of the press, who came in close contact with the president or vice president.

"Out of an abundance of caution, temperature checks are now being performed on any individuals who are in close contact with the President and Vice President," Judd Deere, a White House spokesman, said. The affected reporter has not been named.

President Trump also said on Saturday that he took a diagnostic test for the coronavirus on Friday night; his results came back Saturday night and he tested negative for coronavirus.

Trump also said that his temperature was "totally normal" when he checked it before entering the briefing room on Saturday. Trump's announcement came after his physician reportedly released a letter saying the president didn't need to be tested for the virus.

The president declared a national emergency over the virus on Friday and later urged Americans on Twitter to engage in social distancing.